I ran across this story and thought it was interesting, did some research and dug up a lot more information.

The year is 1916 and Germany is looking to revive its commerce raider campaign.

At the start of the war, Germany had used a few merchant ships armed with intent to prey on Entente shipping ( the understanding between Britain and France reached in 1904, forming the basis of Anglo-French cooperation in World War I). Albeit they were not exactly successful in terms of sunk tonnage, they did tie up considerable Entente naval assets searching for them. By 1915 most were either sunk, captured, or interned in neutral ports.

The problems of German commerce raiders was a complete Entente supremacy on the sea. Even if successful, they were inevitably found and sunk by Entente forces, especially since they were dependent on coal, leading many to be caught during or near neutral ports or be blockaded and interned there.

So, in order to solve the little problem of coal, Germans decided to use the strikingly creative, brand new innovation of… sails. 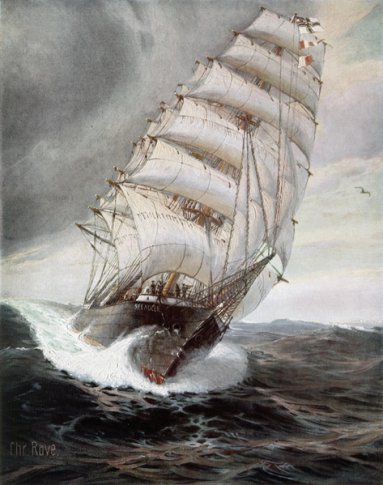 They took the three-masted sailship Pass of Balmaha, in German hands since its capture by an U-boat in the previous year, added an auxiliary engine(so the ship would not be crippled by unsuitable winds), two hidden 105mm cannons, two hidden machine guns, and an armory of rifles, all so ingeniously hidden to avoid breaking the masquerade of being a definite noncombatant. The Pass of Balmaha was commissioned in the Imperial German Navy as SMS Seeadler, and on 21 December 1916 she set sail under the command of Kapitänleutnant Felix Graf von Luckner, the man who had the biggest balls in the Imperial German Navy without a doubt. 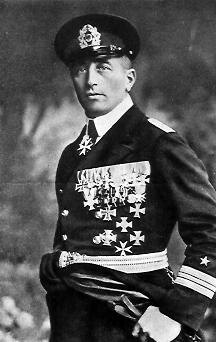 Now, Herr von Luckner was already adventurous to the point of insanity by that point. From a long line of Prussian soldiers, he had stolen his father’s pistol and run off from the house at the age of thirteen, volunteered to work as a cabin boy in a Russian sail ship, fell over and almost drowned in a storm, and understandably quit first chance, at Australia, since the captain of the ship explicitly forbid rescuing him during the aforementioned storm. Over the next seven years he worked as a boxer, bartender, tavern-keeper, pig-stealer(he served time in prison in Chile for a while because of that), a circus worker, a kangaroo hunter, an assistant lighthouse keeper(which he had to abandon after being caught by his hotelkeeper while sleeping with his daughter), a fisherman, a railway worker, a sailor, and a Mexican Army soldier in President Diaz’s own guard, before returning home,after which he got a degree in navigation and then joined the Navy in 1912. So, fresh from the end of his tenure as a gun turret commander aboard SMS Kronprinz, with which he had been in Jutland, Luckner was the perfect man for the insanity it must have been to commit sailship piracy in the era of the dreadnought.

After first bluffing their way past the British blockade by pretending to be Norwegian whalers and successfully fooling a boarding party from the HMS Avenger, Luckner and his Die Piraten des Kaisers, as they would soon come to be called, began to hammer shipping across the Atlantic mercilessly. Basically, he would bring close his select prey by a variety of ruses, hoist the Imperial German Naval Ensign, jam the 105mm guns in the enemy’s face, demand surrender, take the crew prisoner, plunder the cargo, sink the ship, and merrily sail away in search of more prey.

For months he smashed Entente shipping left and right, and lamented that the Dutch were not at war with Germany; they were almost always laden with goods he was not allowed to plunder! He sunk fifteen Entente ships totaling well over thirty thousand tons in tonnage, and managed to do the whole thing without killing anyone. The only casualty of his campaign would be a single British sailor aboard the 3600 ton steamer Horngarth who died from a burst pipe as the ship tried to flee. When his prisoners became too many, he tore most of the sails off the next ship he captured(French barque Cambronne) off the coast of Brazil, put all his prisoners in it, and let them sail the ship into Rio. 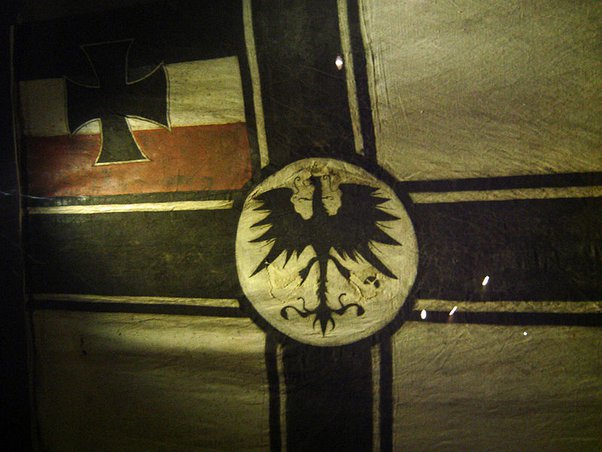 Seeadler’s rampage came to an end in 2 August 1917, when a tsunami hit her while anchored outside the lagoon of Mopelia, where Luckner had stopped to scrape the hull clean, a necessary procedure for sailships. The ship sunk, even though the Germans managed to salvage almost all of their supplies and two long boats. Not giving up, Luckner took one of the boats, rigged it as a sloop, and took basically a modified rowboat over open ocean all the way to Fiji, nearly four thousand kilometers, over a month, leaving his crew and 46 prisoners on Mopelia intending to return. However, he was caught by the police, and was interred on a PoW camp on Motuihe Island. 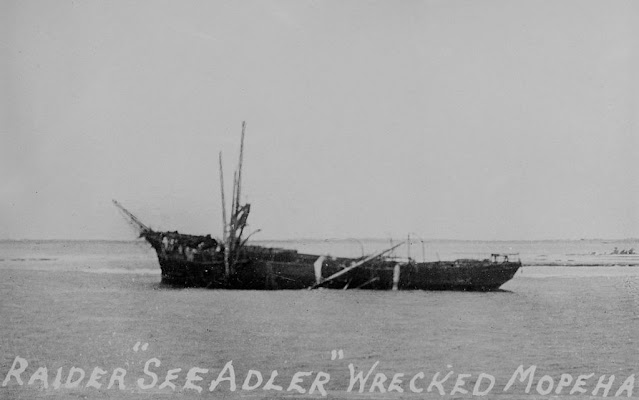 Luckner’s men made their way out on 4 October when the French sloop Lutece anchored off Mopelia and was attacked and taken over by the Germans, making Die Piraten des Kaisers one of the few pirate gangs who could keep pirating without a ship. Renaming it Fortuna, they sailed for South America, where they struck rocks off Easter Island and were interned by Chile.

Meanwhile, thousands of kilometers to the west and unaware of his crew’s survival, Luckner refused to give up. Faking setting a play for Christmas, Luckner and other prisoners broke out on 13 December using provisions for the ‘play’, and stole the camp commandant’s personal motorboat, now flying a homemade Imperial German ensign fashioned from a bedsheet and an empty bag of flour. Next day they took over the New Zealander fishing ship Moa by jamming a pistol in the captain’s face. Luckner’s plan was to sail for Kermadec Islands, a New Zealand supply station, raid the depots, load up on gear and return to Mopelia to pick up his crew, but before he could continue the second phase of his insane prison break the Moa was caught by a pursuing New Zealander warship off Kermadec, on 21 December.

Exactly one year after its start, Luckner’s mission ended, and with it the story of the last sailship used in warfare.

Posted by MrGarabaldi at 8:41 AM