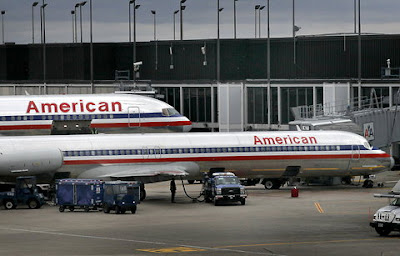 How Does the American Airlines Bankruptcy Affect You?American Airlines, which filed for bankruptcy on Tuesday, is among the last of the major carriers to do so, raising predictable questions for customers about how the changes will affect them. Based on what can be gleaned from the bankruptcies of other airlines over the past few years, the general answer is that at least for the short term, the experience of flying with American will remain largely the same, though changes are likely down the road.Here are answers to more specific questions about miles, future flights and services.What Happens to My Frequent Flier Miles? Airlines can revise the rules of their loyalty programs without notice, though American says it plans no changes. On Nov. 29 the company notified AAdvantage members in an e-mail that miles “you’ve earned are yours and will stay yours, subject to the usual policies, until you choose to redeem.” The message went on, “your elite qualifying miles and your elite status, including lifetime status granted under the Million Miler program, is secure and remains intact.” Travelers on American will also continue to earn miles through partnerships including Citi AAdvantage credit cards as before.Still, all this could change. “If American’s problems prove insurmountable and it is forced into Chapter 7 liquidation, the AAdvantage program would almost certainly be sold to another major airline,” the frequent flier expert Tim Winship wrote in a blog post, “Where Do My Miles Go if American Goes Bankrupt?” on SmarterTravel.com in October. If that happened, he said, “members would find themselves and their miles transferred to another program.” When Eastern Air Lines liquidated in 1991, he pointed out, its miles were honored in Continental Airlines’ program. In that same year, he added, when Pan Am went under, WorldPass members and their miles were folded into Delta’s program.Analysts say there is no indication at this point that American is headed in that direction.What About Future Flights?Customers considering purchasing a ticket on American for later this year or next shouldn’t worry that the airline won’t be there. AMR Corp., the parent company of American Airlines and American Eagle, filed for Chapter 11 bankruptcy protection, which allows companies to keep operating while they reorganize. American says it is honoring all tickets and reservations as usual and will make normal refunds and exchanges. “We will continue to operate our regular schedule of flights, and there are no immediate changes to our service or schedules as a result of the Chapter 11 filing,” the company stated in a list of answers on its Web site to frequently asked questions about flights and tickets. Go to aa.com/restructuring and click on the links under “information for customers” for more information.Keep in mind that most major airlines have sought bankruptcy protection over the last few years and have remained in business. “Airlines do a better job at filing bankruptcy than delivering luggage,” said Henry H. Harteveldt, a travel industry analyst and co-founder of Atmosphere Research Group, based in San Francisco. “Continental has gone through it twice. Delta, Northwest, US Airways, America West. Except for Southwest, there isn’t a single airline that started before deregulation in 1978 that has not gone through bankruptcy.”Will There Be Service Cuts?Probably. In the past, airlines have used bankruptcy as a way to cut service to some cities — a move analysts say travelers should watch out for next year. “Airlines generally use bankruptcy as a way to exit unprofitable routes, unprofitable cities and terminal leases on unprofitable aircraft,” Mr. Harteveldt said. “So while it’s too soon to tell and speculation is useless, people who are traveling at least six months or more away from now will definitely want to check their reservations as time gets closer.”The airline might also consider teaming up with other airlines through code-share agreements to take on certain routes they can’t provide on their own. “That may mean a change in seat assignments as airplanes would be different,” Mr. Harteveldt said. Upgrades for frequent fliers booked on such flights could also be affected. But any possible changes are still many months away, as the company navigates through bankruptcy.
Posted by MrGarabaldi at 9:24 PM No comments:

I saw this on Yahoo, a good read, the linkie is here

The Chinese have called it their “Underground Great Wall” — a vast network of tunnels designed to hide their country’s increasingly sophisticated missile and nuclear arsenal.
For the past three years, a small band of obsessively dedicated students at Georgetown University has called it something else: homework.
Led by their hard-charging professor, a former top Pentagon official, they have translated hundreds of documents, combed through satellite imagery, obtained restricted Chinese military documents and waded through hundreds of gigabytes of online data.
The result of their effort? The largest body of public knowledge about thousands of miles of tunnels dug by the Second Artillery Corps, a secretive branch of the Chinese military in charge of protecting and deploying its ballistic missiles and nuclear warheads.
The study is yet to be released, but already it has sparked a congressional hearing and been circulated among top officials in the Pentagon, including the Air Force vice chief of staff.
Most of the attention has focused on the 363-page study’s provocative conclusion — that China’s nuclear arsenal could be many times larger than the well-established estimates of arms-control experts.
Graphic: Evidence of China’s nuclear storage system)

“It’s not quite a bombshell, but those thoughts and estimates are being checked against what people think they know based on classified information,” said a Defense Department strategist who would discuss the study only on the condition of anonymity.
The study’s critics, however, have questioned the unorthodox Internet-based research of the students, who drew from sources as disparate as Google Earth, blogs, military journals and, perhaps most startlingly, a fictionalized TV docudrama about Chinese artillery soldiers — the rough equivalent of watching Fox’s TV show “24” for insights into U.S. counterterrorism efforts.
But the strongest condemnation has come from nonproliferation experts who worry that the study could fuel arguments for maintaining nuclear weapons in an era when efforts are being made to reduce the world’s post-Cold War stockpiles.
Beyond its impact in the policy world, the project has made a profound mark on the students — including some who have since graduated and taken research jobs with the Defense Department and Congress.
“I don’t even want to know how many hours I spent on it,” said Nick Yarosh, 22, an international politics senior at Georgetown. “But you ask people what they did in college, most just say I took this class, I was in this club. I can say I spent it reading Chinese nuclear strategy and Second Artillery manuals. For a nerd like me, that really means something.”
For students, an obsession

The students’ professor, Phillip A. Karber, 65, had spent the Cold War as a top strategist reporting directly to the secretary of defense and the chairman of the Joint Chiefs of Staff. But it was his early work in defense that cemented his reputation, when he led an elite research team created by Henry Kissinger, who was then the national security adviser, to probe the weaknesses of Soviet forces.
Karber prided himself on recruiting the best intelligence analysts in the government. “You didn’t just want the highest-ranking or brightest guys, you wanted the ones who were hungry,” he said.
In 2008, Karber was volunteering on a committee for the Defense Threat Reduction Agency, a Pentagon agency charged with countering weapons of mass destruction.
After a devastating earthquake struck Sichuan province, the chairman of Karber’s committee noticed Chinese news accounts reporting that thousands of radiation technicians were rushing to the region. Then came pictures of strangely collapsed hills and speculation that the caved-in tunnels in the area had held nuclear weapons.
Find out what’s going on, the chairman asked Karber, who began looking for analysts again — this time among his students at Georgetown.
The first inductees came from his arms-control classes. Each semester, he set aside a day to show them tantalizing videos and documents he had begun gathering on the tunnels. Then he concluded with a simple question: What do you think it means?
“The fact that there were no answers to that really got to me,” said former student Dustin Walker, 22. “It started out like any other class, tests on this day or that, but people kept coming back, even after graduation. . . . We spent hours on our own outside of class on this stuff.”
The students worked in their dorms translating military texts. They skipped movie nights for marathon sessions reviewing TV clips of missiles being moved from one tunnel structure to another. While their friends read Shakespeare, they gathered in the library to war-game worst-case scenarios of a Chinese nuclear strike on the United States.
Over time, the team grew from a handful of contributors to roughly two dozen. Most spent their time studying the subterranean activities of the Second Artillery Corps.
While the tunnels’ existence was something of an open secret among the handful of experts studying China’s nuclear arms, almost no papers or public reports on the structures existed.
So the students turned to publicly available Chinese sources — military journals, local news reports and online photos posted by Chinese citizens. It helped that China’s famously secretive military was beginning to release more information, driven by its leaders’ eagerness to show off China’s growing power to its citizens.
The Internet also generated a raft of leads: new military forums, blogs and once-obscure local TV reports now posted on the Chinese equivalents of YouTube. Strategic string searches even allowed the students to get behind some military Web sites and download documents such as syllabuses taught at China’s military academies.

Read the rest here
Posted by MrGarabaldi at 6:05 PM No comments: