Reading a book rather than blogging.....

I have been reading my kindle with the following book.  It is really good, and of course I know several of the authors which makes it really neat.   Please if y'all haven't already bought it, check it out!! 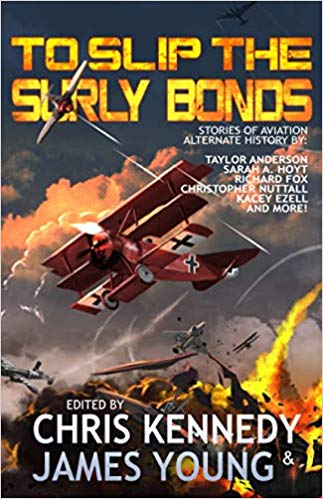 Linkie Here
Thirteen outstanding authors. Thirteen aviation stories that never happened.
Throughout the human experience, historians have wondered, “What if?” What if Americans had fought on the side of Germany in World War I? What if Germany had invested in naval aviation in World War II? What if Russia had started World War III?
Wonder no more, for these questions, along with many others, are answered within the pages of this book. Told by a variety of award-winning authors, like Sarah Hoyt, the 2018 Dragon Award Winner for Alternate History, Richard Fox, the 2017 Dragon Award Winner for Best Military Science Fiction, and Kacey Ezell, the winner of the 2018 Baen Reader’s Choice Award, “To Slip the Surly Bonds,” deals with aviation warfare that never happened in our world…but easily could have.
The second book in the exciting new “Phases of Mars” anthology series, there is something for everyone inside! From fighting alongside the Red Baron, to flying a P-38 Lightning, to present day air warfare, “To Slip the Surly Bonds” traces a century of aviation warfare…that wasn’t. From learning how the PBY got to the new world in Taylor Anderson’s “The Destroyermen” series…to fighting the French in a very different Vietnam, this book has it, so come aboard and find out “what if” all of these things had changed history…just a little. You’ll be glad you did!
Inside you’ll find:
Friends In High Places by Joelle Presby and Patrick Doyle
In Dark’ning Storms by Rob Howell
Perchance To Dream by Sarah A. Hoyt
Trial of the Red Baron by Richard Fox
The Kaiserin of the Seas by Christopher G. Nuttall
Through the Squall by Taylor Anderson
The Lightnings and the Cactus by James Young
Catching the Dark by Monalisa Foster
Do The Hard Thing by Kacey Ezell
Tail Gunner Joe by William Alan Webb
Red Tailed Tigers by Justin Watson
Zero Dark 30 by JL Curtis
Per Ardua Ad Astra by Jan Niemczyk
Posted by MrGarabaldi at 10:12 PM