I have blogged a lot about Stalin and Hitler because I like History, and I believed that both formed a pact for their own reasons, Hitler wanted to invade Poland, then turn his attention to France without worrying about Stalin being froggy at his back.  Stalin signed the pact, besides getting a chunk of Poland, they also had a free hand with the Baltic republics with the world distracted by other events.  And he also needed to buy time to rebuild the Red Army after the purges of 1937.  This was verified when during the "Winter War" when the Soviets invaded little Finland and got their noses bloodied by the Finns when the poor performance of the Red Army was shown to all the world.  The signing of the pact shocked the world because National Socialism and Communism were not compatable and people were expecting a clash of Titans. 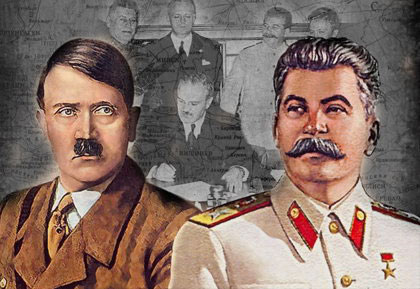 Prior to World War II, the USSR Soviets and the  Nazis signed a non-aggression pact. Historians say that the agreement cleared the path for WWII to begin. The Defense Ministry in Russia has just declassified documents relating to that agreement.
The Molotov-Ribbentrop Pact was signed on August 23, 1939. Along with the non-aggression pact The two countries agreed to separate Finland, Estonia, Lithuania, Latvia, Romania and Poland into two “spheres of influence” controlled by the USSR and Germany.
This ensured that The Red Army would not interfere in Germany’s invasion of Poland which began the war.
The Defense Ministry decided not to release the documents in chronological order. They say that the order the documents are released in will give readers “the most complete picture” of how the two sides came to sign the agreement.
The Ministry highlighted a 31-page memo from a Red Army chief of general staff, Boris Shaposhnikov. According to the ministry, this document will change the prevailing views of why Russia signed the pact.
The 1938 memo discusses the Soviet’s need to prepare for battle both against Germany and Poland and also against Japan. It raises concerns about the vast number of troops, tanks and warplanes that the Germans could deploy against the USSR on the Belarussian-Ukrainian border.
President Vladimir Putin, speaking in 2014, said that the Molotov-Ribbentrop Pact was the Soviet response to being isolated by the Western countries and having its peace efforts rebuffed by the West.
Alexander Dyukov, of the Russian Academy of Science, called Shaposhnikov’s dispatch a key to studying military history. Sergei Kudryashov, a researcher with the German Historical Institute in Moscow, found the document to be uninformative and only interesting in how it illustrated Soviet understanding of the conditions just before the war.

The Defense Ministry said that the motivation behind releasing the documents was for the purpose of protecting the truth and to keep others from trying to revise history.
The USSR had attempted to come to terms with Britain and France for a collective security agreement against Germany. By 1939, with the likelihood of reaching an agreement with the two countries, Moscow felt the need to change their policy in order to avoid fighting Germany on their own.
Joseph Stalin fired his foreign minister, Maksim Litvinov, a Jew who sought collective security. Litvinov was replaced with Vyacheslav Mikhaylovich Molotov who almost immediately began negotiating with the Nazi foreign minister, Joachim von Ribbentrop.
Stalin continued to negotiate with France and Britain until he finally decided to sign the pact with Germany. He hoped to avoid conflict with Germany until the Red Army could be built back up following a purge of officers in 1937.
For Hitler’s part, a nonaggression pact with the Soviet Union freed him to invade Poland with no resistance from the Red Army. Following the occupation of Poland, Germany would be free to engage France and Britain without opening another front with the Soviets.
Publicly, the pact prevented either side from attacking the other, from assisting any country that attacked the other, not to join any group that threatened the other.
And to consult with each other in any matters that affect the two parties, and to solve all differences between the two countries through negotiation and arbitration. The pact was to last 10 years with an automatic renewal for 5 more years unless either party gave notice to terminate a year before it expired.
Secretly, a protocol was attached to the pact which divided eastern Europe into spheres of interest controlled by Germany and the Soviet Union. Two additional points were added which clarified borders and renounced Germany’s rights to Lithuania in exchange for a sum of money from the Soviets.
The pact ended on June 22, 1941, when the Nazis attacked the Soviets in Operation Barbarossa.
The Soviet Union’s borders in eastern Europe roughly followed those set in the Molotov-Ribbentrop pact until the 1990s. At that time, changes within the USSR made it impossible for the central government to stop the Baltic states from declaring independence.
Posted by MrGarabaldi at 10:31 AM