"How the Soviet Army Fights".

I am a contributor on Quora and I had posted this several years ago and it keeps getting "Uplikes", I am in the 4 digits now.  I am one of the contributors for the "Grand Review of Armies", something I do enjoy because of the history aspect of it.  That being said, there is a lot of dumbassery on it, especially on politics.  it can be fun troll stomping but I do try to avoid it, nobody enjoys it except the troll.

As far as this comment goes, I have mostly "attaboys" and they picked up after the invasion of the Ukraine and a few positive criticism and a few butthurt people that are fanboys of the Russians and believe that the Russians are the 2nd coming.  I surmise that they are people either college students that have an affinity for communism and any criticism of their "client" state is a de-facto criticism of who they are or people that actually live there and take umbrage to what I have said.  Truth be told , what I have said was accurate to 1991, how the Russians fight now I don't know, and it looks like they have lost a lot of tactical knowledge since the cold war.  I can't crow about that, I was speaking to my brother and who said that it is the same with us, we have spent 20 years fighting "Hajj" and have forgotten how to prepare the battlefield against a peer and a near peer force.  he had told me that this was driven home during a briefing when the squadron commander was asking questions that only the old warrants that have been around in the back of the room knew the answer to, the younger guys and gals had no clue.  We also have lost a lot of institutional knowledge.  I had commented before that we are not the lean mean green machine that destroyed the Iraqi's in 1991 and 2003.  We were trained by the people that survived Vietnam and 20 years of getting our doctrine tuned and flush with cash from the Reagan years. we did what they said couldn't be done. 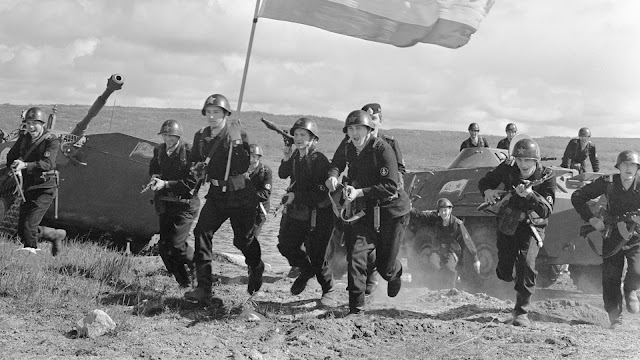 One of my specialties or discipline in the service was "The Soviet Army" and how they fight. What doctrine they use in the attack.

Basically they would use a 3 layer approach, the initial group that would be considered class "A" divisions, would attack the FEBA(Forward edge battle area) look for any weak points, then once they find it, the second echelon which would have their latest equipment and best trained units would move up, attack the weak points and force a breakthrough then run into the rear of the opposing formation and the 3rd echelon which was comprised with "class B and some class"C or V"units would provide security for the operations. This is the doctrine developed by Georgy Zhukov and it worked well against the Germans in WWII. The Soviets still trained on the same model. Casualties were of no concern to the leadership, That was one of the big differences between " us" and " them".

I will give an example...If one of our units ran into trouble, we would call for arty or air support. It is part of our doctrine to do this. Part of the combined arms training that we do. Well the Soviets would NOT do that...The Soviets would doctrinally refuse such a request especially in the initial assaults, they wanted to save the combat power for the break through, and not "waste" it on small actions. That is why most of the artillery and free rockets were assigned directly to the Soviet Army or Front Commander, to save the resources.

We developed "airland battle" our doctrine in the late 70's to disrupt the echelon attacks that the Soviets would do in case of an attack. Our Apache helicopters and A-10's reflected this doctrine. That is what we used in Desert Storm. the Iraqi's were trained and equipped according to Soviet doctrine. We knew that we couldn't go toe to toe in an slugging match with the Soviets, they still outnumbered us in men and tanks. I think Stalin said "Quantity has a quality all its own". So we had to be "smarter" then they were. They had a lot of top down management, whereas we trained individual initiative in our soldiers. I don’t know How the Russians do now, Their doctrine is sound and their equipment is better than it was 10 years ago. I don’t know how they “do” it anymore, I am no longer “In the Know”

Posted by MrGarabaldi at 9:58 AM