I  know that this was done on a Tuesday.. I was unable to get it up earlier....Work gets in the way...You believe that?   Jeez...My employer expects me to fix airplanes...
I knew of billy Joel from the 1970's, but the first album I liked was his "Nylon Curtain" album, that one got a lot of airplay on MTV but because of the interest I started paying attention to his earlier stuff.  I considered Billy Joel one of the all time iconic singers in Rock history...and he plays piano too...!  I wanted to see Billy Joel perform, but was unable to.  When Billy and Elton ran a double billing...I really wanted to see them, but the price for the tickets were prohibitive and I didn't go.  What can I say...I have more important stuff to spend money on........But I have a lot of respect for Billy as a musician for the myriad of talents that be brings to the genre.


"Piano Man" is the first single released by Billy Joel. It was released on November 2, 1973, and has been included on several subsequent albums. Billy Joel's first major hit and his signature song, the song peaked at #25 on the Billboard Hot 100 chart in April 1974 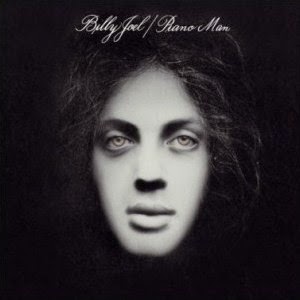 "Piano Man" is a fictionalized retelling of Joel's experience as a piano-lounge singer for six months in 1972 at the now defunct Executive Room bar in Los Angeles. Joel has stated that all of the characters depicted in the song were based on real people. "John at the bar" was really the bartender who worked during Joel's shift at the piano bar. "Paul is a real estate novelist" refers to a real estate agent named Paul who would sit at the bar each night working on what he believed would be the next great American novel. "The waitress is practicing politics" refers to Joel's first wife Elizabeth Weber, whom he met at The Executive Room. Joel had moved from New York to L.A. to record his first album, Cold Spring Harbor which was marred by a mastering error by the album's producers at Family Productions, the first label that signed Joel. After this bad experience, Joel wanted to leave his contract with Family Productions for Columbia Records, but the contract that he'd signed made this very difficult. So Joel stated that he was "hiding out" at the bar, performing under the name Bill Martin, while lawyers at Columbia Records tried to get him out of his first record deal. 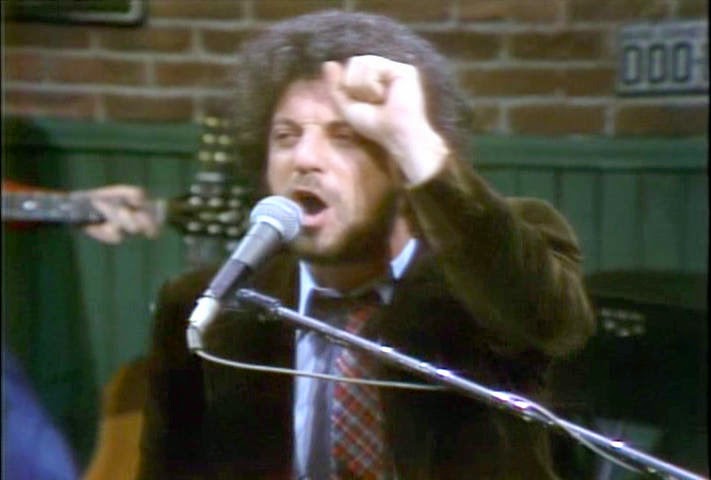 The verses of the song are sung from the point of view of a bar piano player who focuses mainly on everyone else at the bar: an old man, John the bartender, the waitress, businessmen, and bar regulars like "real estate novelist" Paul and US Navy sailor, Davy. Most of these characters have broken or unfulfilled dreams, and the pianist's job is to help them "forget about life for a while," as the lyrics state. The chorus, in bar-room sing-along style, comes from the bar patrons themselves, who say, "Sing us a song, / You're the piano man; / Sing us a song tonight. / Well, we're all in the mood for a melody, / And you've got us feeling all right." The song's style and subject are highly reminiscent of fellow Long Islander Harry Chapin's story-songs.
Joel acknowledged on Inside the Actors Studio in 1999 that each of the characters in the song was based on a real person, either a friend of his or another stranger at the bar. For instance, Joel claimed that the waitress "practicing politics" was actually his first wife, Elizabeth Weber.

A first promo for this song was shot in 1977. It depicted Joel as a bar act (Bill Martin) performing the song, and shows a typical American bar as a setting. A new video was shot in 1985, with new extras, and was more or less the same as the original. The original video used an alternate take of the song (but it was at the same length as the album version), while the new one used the standard album version.


1985 version
The single broke into the Billboard Top 40 in April 1974, but the single fell considerably short of the top 10 in the US (Billboard #25). "Piano Man" fared better in Canada, where it peaked at #10, and established Joel as a star there. (From 1975-80, every one of Joel's charting singles peaked higher in Canada than in the US, except for songs that reached #1 in both markets.)
Because "Piano Man" was at the time only a moderate hit in the US, the song was not played often on American radio during the next 3 or 4 years. However, after the 1977 release of Joel's album The Stranger and Joel's quick subsequent rise to superstardom, the song would soon become one of his most well-known and loved songs. It has been, since '77, a big "oldies" radio hit, and is considered Joel's signature song, partially due to its title. Today it remains popular, and ranks as Joel's #1 song on the iTunes Store as of February 2014. The song is so well known that during Joel's concerts, he usually lets the audience sing the chorus. In concert, Joel often performs "Piano Man" as a finale.
During the first Face to Face tour featuring Elton John and Joel, ads promoted the event as "Rocket Man meets Piano Man". 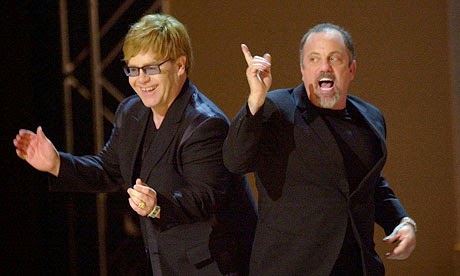 Posted by MrGarabaldi at 4:15 PM