This edition of Monday Music is again out on Tuesday.   I got off work, had to swim home while driving a motorcycle...got home then took my son to the Dr's office.  The chiggers, mosquito's and ticks had a field-day with him.   He said that "I used the off...but they ate through it..."    Somehow I doubt it....Well we got home and I started working on my Ranger...First off I accomplished the repairs. 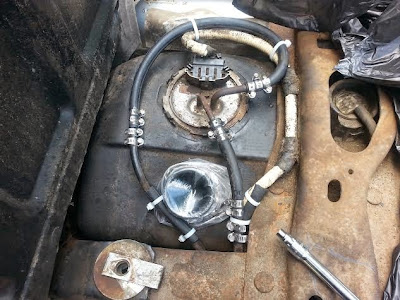 I replaced the damaged hose and also replaced the return line for I saw it cracked.   I also used exra material to protect the hoses from rubbing.  I then tried to install my bed on the Ranger with my son..with mixed results. 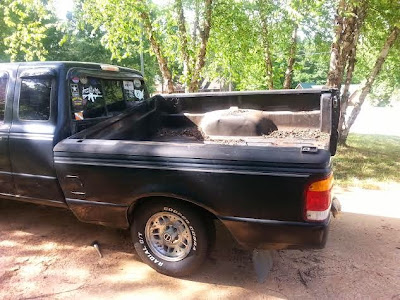 I am going to have to find an adult with upper body strength.   Oh well, will try to get it handled this weekend.

I decided to go with "Jump", I can't remember if I featured it in the past.  I really liked this album, I graduated in 1984. This song and the album was very well done.  Every time I hear it, this song takes me back to my senior year.


"Jump" is a song by the American rock band Van Halen. It was released in December 1983 as the lead single from their album 1984. It is Van Halen's only single to reach number one on the U.S. Billboard Hot 100. The song differs from earlier Van Halen songs in that it is driven by a rolling synth line (played on an Oberheim OB-Xa), although the song does contain a guitar solo, which Eddie Van Halen claims is his favorite solo he never wrote. This refers to the fact that it was spliced together from multiple takes.
"Jump" is one of Van Halen's most popular and instantly recognizable compositions, perhaps because it encompasses aspects of two genres widely associated with 1980s popular music in America: synth-driven pop and "arena"-style hard rock. David Lee Roth dedicated the song to martial artist Benny Urquidez, of whom he was a student. The song changed the future and style of Van Halen from being a predominantly hard rock band to one of more radio-oriented popular music.
The synth line was written around 1981 by Eddie Van Halen but it was refused by the other members of the band. In 1983, producer Ted Templeman asked Roth to take a listen to the unused song idea. Riding around in the back of his 1951 Mercury, with band roadie Larry Hostler driving, Roth listened repeatedly to the song. To come up with a lyric for it, he remembered seeing a television news report the night before about a man who was threatening to commit suicide by jumping off of a high building. Roth thought that one of the onlookers of such a scene would probably shout "go ahead and jump". Roth bounced this suggestion off of Hostler who agreed it was good. Instead of being about a threatened suicide, the words were written as an invitation to love. Roth later told Musician magazine that Hostler was "probably the most responsible for how it came out." 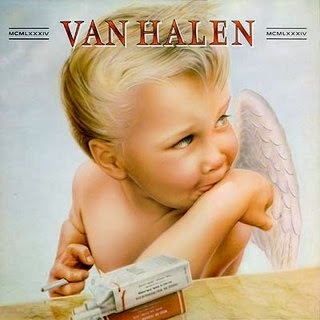 This stylistic change was further cemented when it seemed to create severe tensions between Eddie Van Halen and David Lee Roth. It has been claimed Roth wanted the band to avoid using synthesizers and focus more on traditional hard rock. This conflict eventually ended in Roth's departure from the band. In the 1995 Rolling Stone cover story on/interview with Eddie Van Halen (RS #705, dated April 6) the circumstances surrounding Roth's leaving are discussed. In this interview Eddie claims that the main reason for the split was that Roth and [long-time Van Halen producer] Ted Templeman both disliked the fact that he had built his own studio and was able to work on music away from their influence. He said that "the first thing I did up here was 'Jump' and they [Roth and Templeman] didn't like it. I said 'take it or leave it', I was getting sick of their ideas of what was commercial ... At first [Roth's solo EP] Crazy from the Heat was great because Roth laid off me a bit. Little did I know he was testing the waters. Then he called me up and asked me to go to his house and said he was going to make a Crazy from the Heat movie. He had some deal that fell through. But at the time I was depressed. I cried, then I called my brother and told him the guy quit."
Nevertheless, Roth and Templeman did work on "Jump" at Eddie's disputed new studio, with Roth providing the lyrics and the vocal melody.
Ted Templeman recalls that "'Jump' was recorded at Ed's studio. [Engineer] Donn [Landee] and Ed put the track down alone in the middle of the night. We recut it once in one take for sonic reasons. Dave wrote the lyrics that afternoon in the backseat of his Mercury convertible. We finished all vocals that afternoon and mixed it that evening".
The song thereafter secured its place among rock music's most popular songs, and is now considered by some to be one of the most influential rock songs of all time.
Live performances of "Jump" are preceded by Eddie's synthesizer solo "1984". During the reunion tour with Roth, the two songs were used for the band's encore. Roth often waved a large red flag during the synth section while the stage was still coated in dark cover lights.
According to Daryl Hall of Hall & Oates, "[Eddie] Van Halen told me that he copied the synth part from 'Kiss on My List' and used it in ‘Jump.’ I don't have a problem with that at all."


The music video for "Jump" was directed by David Lee Roth. It is a straightforward concept, much like many of the hard rock videos of the time. It shows the band performing the song at a mock concert. It was nominated for three MTV Video Music Awards, and won "best stage performance" for the video.
The version of the song used for the video differs slightly from the album version. During the keyboard solo prior to the final refrain, David Lee Roth is heard (and seen) yelling out. He did this during the band's mock performance for the video's filming, and it is believed that afterwards he overdubbed this yell especially for the video version since it is not present in the song to begin with.[