I have been very busy...again. Monday Music is out on Tuesday.  This time because the Ranger decided to break a fuel line.I don't complain...a 21 year old truck will have stuff break on it.  It could have been worse.....like a busted tank or a pump. 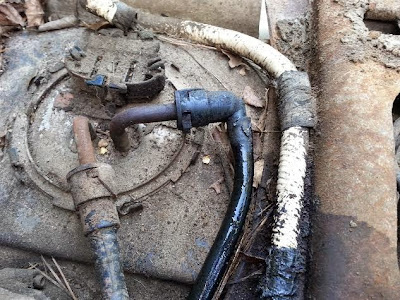 This is what I saw after I removed the bed. 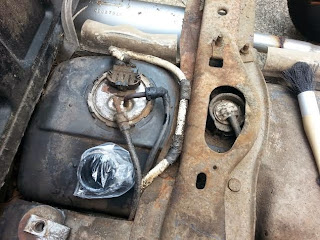 Cleaned up the area and covered the tank entrance.

...So I spent Monday afternoon until scouts working on the Ranger. 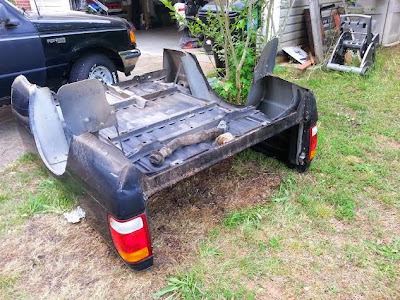 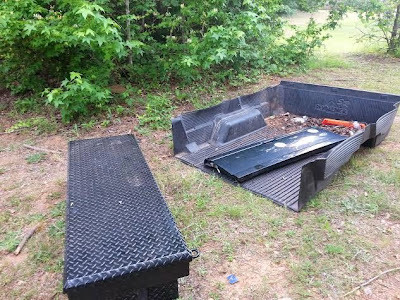 And now I have Ranger parts in the yard..... 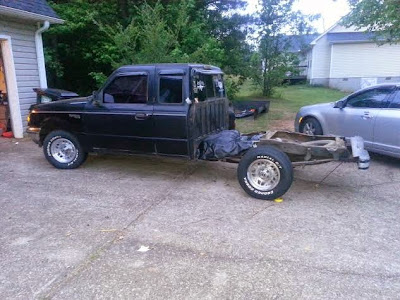 Today I also worked Overtime:)  so I still have Ranger parts in the yard.   Perhaps Tomorrow I will have time to get the Ranger running...unless they offer overtime..... 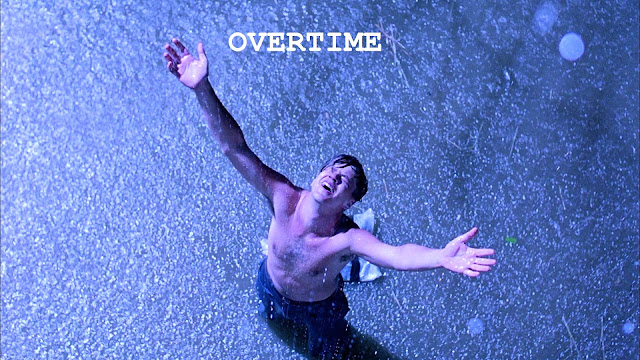 I decided to roll with "Rapture", Momma Fargo wanted me to feature "Rap" this week, and she is my favorite blogbabe so I had no problem with this.  I remembered when this song first hit the scene, it was soo different than the boring stuff that was around then, Disco had gotten too strange and over time top and the high-water mark was reached and the genre was  was fading and the music scene appeared to be really boring, there wasn't any real noteworthy songs around this time.  Well this song was soo different that it immediately captured the imagination of the music public.  I had this song on my Ronco album and and I played it "Loud".  the talking and rhyming was really unique.....It was the precursor of "Rap",   That is very popular today.  I like the"old school" rap that came out later, the "gangsta" rap I didn't care for much.   Although some of it is good from Coolio and Emimem and a few others.
"Rapture" is a song by the American rock band Blondie from their fifth studio album, Autoamerican (1980).
In January 1981, "Rapture" was released as the second and final single from the album. The song reached #1 on the U.S. Billboard Hot 100 chart, where it stayed for two weeks. It was the first #1 song in the U.S. to feature "rap." The song peaked at #4 in Australia and #5 in the United Kingdom. 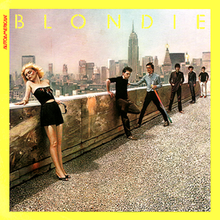 "Rapture" is a combination of disco, funk, and hip hop with the rap section forming an extended coda. The song title "Rapture" served to indicate this element. While it was not the first single featuring rapping to be commercially successful, it was the first to top the charts. Its lyrics were especially notable for namechecking hip-hop pioneers Fab Five Freddy and Grandmaster Flash.

The music video made its television debut on Solid Gold on January 31, 1981, and became the first rap video ever broadcast on MTV. Set in the East Village section of Manhattan, the "Man from Mars" or "voodoo god" (dancer William Barnes in the white suit and top hat) is the introductory and central figure. Barnes also choreographed the piece. The final shot is a one-take scene of Debbie Harry dancing along the street, passing by graffiti artists, Uncle Sam, a Native American and a goat. Fab Five Freddy and graffiti artists Lee Quinones and Jean-Michel Basquiat make cameo appearances. Basquiat was hired when Grandmaster Flash did not show for the filming.
Posted by MrGarabaldi at 9:01 PM