The end of Pompey and the rise of Caesar.

This is another one of my scheduled Historical post, I try to schedule them every couple of days apart.   I read a book a long time ago and it detailed the adventures of Caesar in Gaul(Modern Day France). 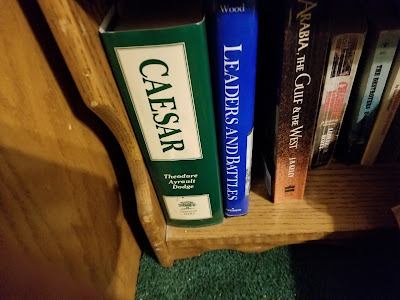 And this is one of several bookshelfs that I have in my "Frog" or "Front Room over Garage" or basically my mancave where all my souvenirs of my travels would up. 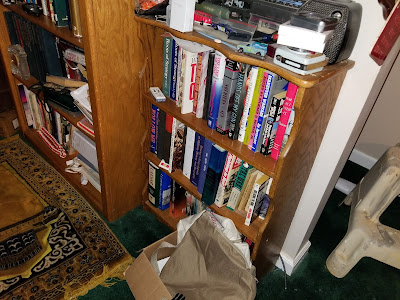 The Battle of Pharsalus was one of the most important in Julius Caesar’s career. Fought on the 9th of August 48 BC, it was the turning point that gave him victory in Rome’s civil war, taking control of the empire and effectively ending the Republican government under which it had been run for hundreds of years. 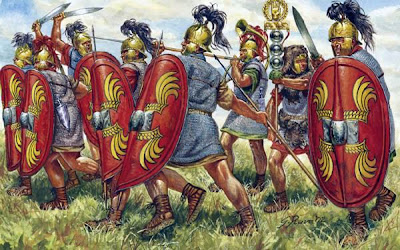 Caesar’s Civil War
The Great Roman Civil War, also known as Caesar’s War, was the culmination of a long-running political conflict within the Roman elite. The Populares, a group of leaders from the senatorial class, had taken to using people’s assemblies and popular support to achieve greater power and forward their policies. This alarmed the Optimates, the conservative group within the Senate, who saw the power of the Senate and the aristocracy being eroded by this combination of demagoguery and popular will.
This came to a climax with the falling out of Gaius Julius Caesar and Gnaeus Pompeius Magnus, remembered by history as Pompey the Great. The two had previously been political allies within a three-man group that unofficially ruled Rome. With the end of that triumvirate, Pompey sided with the optimates to curb Caesar’s power.
Caesar responded by marching his army on Rome. The optimates fled to Roman possessions in Greece, to give them time to assemble an army. After asserting control over other Roman territories, Caesar followed them.
The Leaders
Julius Caesar came from a senatorial family, part of the aristocracy that ruled Rome. His family had been of relatively minor importance in recent decades, but Caesar ended that. Forming an alliance with Pompey and Crassus, he was given a consulship and command of the Roman armies in Gaul for ten years. Through his superior performance as a general, he defeated the Gauls, gaining huge wealth, prestige and popularity among both the army and the masses.

Pompey began his career in the military before entering the Senate. He served in the Social War and the Civil War that came a decade before the triumvirate. Building on his early successes, he was given massive resources to battle pirates in the eastern Mediterranean, a war he quickly won. Campaigning further east, he was the first Roman to conquer Jerusalem.

These two men formed a secret alliance with a third man, Crassus. Crassus brought his wealth to the group, Pompey military might, and Caesar fame, and for a while, they were the threat the optimates feared. But after Crassus’s death in 53 BC the other two fell out. War soon followed.
The Armies

The army Caesar brought to Greece had only half the men he had hoped to field. He had tried to bring them across the Adriatic in two groups, but the second was blocked by his opponents’ fleet. As a result, though he fielded eight legions, they were under strength, leaving him with 22,000 infantry, supported by around a thousand cavalry.
Pompey fielded double Caesar’s numbers. His eleven legions were at full strength, amounting to 45,000 men. They were supported by 7,000 cavalry.
Caesar’s army was a mixed lot. Some were veterans of his Gallic Wars. These experienced troops, which included the Legion X Equestris, Caesar’s favorite, were loyal to the man who had brought them fame, fortune, and success. The rest of his legions had been levied especially for the Civil War.
Deploying for Battle


Pompey had every advantage going into the battle. He held the higher ground, had twice as many men, and unlike Caesar, he was not running out of supplies. He could choose to fight on favorable terms, whereas his opponent had little option but to accept battle.
Fittingly for the commander of the optimates army, Pompey approached the battle conservatively. His legions were arranged in the traditional three lines, each ten men deep, with the toughest troops on the flanks. On his right was the River Enipeus, on his left his massed cavalry.
Caesar also deployed in three lines but had to thin them down to six men deep to cover the length of Pompey’s army. He pulled some men out of these ranks to form a hidden fourth line on his right, backing up his vastly outnumbered cavalry against the charge he expected from Pompey’s horsemen. The battle-hardened tenth legion held the right-hand end of the main line.
The Fighting
Knowing that time was on his side, Pompey waited for Caesar to attack. But his caution cost him, as he held back so successfully that Caesar’s troops were able to rest halfway through their advance, reforming and catching their breath. At last, Caesar reached Pompey’s lines, and the two forces of infantry clashed.
Meanwhile, Pompey launched his cavalry on the left, driving back those of Caesar and becoming disordered in the process. It was now that the hidden fourth line of Caesarean infantry came into play. Unexpectedly counter-attacking the disorganised cavalry with their spears, they routed them, sending them fleeing past Pompey’s lines.


Now Caesar threw the full weight of his forces into the battle. Across the field, his third rank moved up, the last of his reserves joining the melee while the fourth line marched around and attacked Pompey’s exposed flank.
Pompey’s army collapsed. The general himself fled back to their fortified camp, gathered his family and fled the country. Shortly after that, Caesar’s troops overran the camp.
The Outcome
Reports of numbers from ancient battles always have to be taken with a pinch of salt, due to a tendency towards literary exaggeration. Still, it is clear that Pompey and the optimates lost far more men. Caesar’s own count claimed that he lost 30 centurions and 200 Legionaries while Pompey lost 15,000 dead and 24,000 captured, with nine of their precious eagle standards seized.
The war was not over. Pompey went to Egypt, where he was killed by a king hoping to gain Caesar’s favor. Caesar became embroiled in Egyptian politics, even as he mopped up the remainder of his Roman opponents. But following his victory against overwhelming numbers at Pharsalus, he would never again face a serious military challenge from within Rome

I used the clip from the movie "Cleopatra", I loved that movie and the casting and props were first rate,   In this clip the end of Pompey was explained.
Posted by MrGarabaldi at 7:00 AM