I remembered reading in my history books of Vietnam about the Helicopters callsign "Dustoff" who would fly through enemy fire and sometimes get shot down in the process to rescue injured American soldiers.   The "Whop-Whop" of an inbound "Huey" would do more to raise morale and hope of someone hurt in the bush that they would soon be in a hospital and taken care of.
When I was in the service in the 1980's, the Callsign "Dustoff" was still reserved for the helicopters that were tasked with picking up the wounded and seeing the name in the division radio call sign book reminded me of the stories from Vietnam.  This name honors those "That others would Live".


Among a variety of iconic scenes of the Vietnam War depicted in movies, documentaries, and news coverage, there is one in particular that makes this “first-ever televised conflict” instantly recognizable. 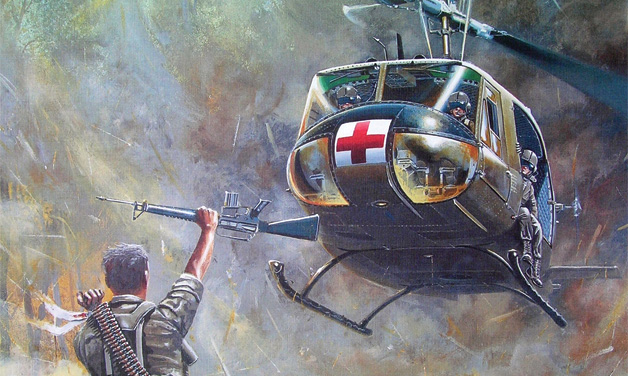 Ambushes and mines made land routes very unpredictable, for the jungle belonged to the Viet Cong.
However, the skies were off-limits for the guerrilla forces, making the Huey one of U.S. Army’s most important assets.
This article is dedicated to the “Dustoff” men–the medics and pilots who rushed into “hot” zones and willingly risked their lives to rescue as many soldiers they could. The name comes from the call sign of the 57th Medical Detachment which began operating in Vietnam in 1962.
“Dustoff” soon became synonymous with all helicopter ambulance units operating in Vietnam.
A well-trained and experienced crew could provide medical treatment for wounded personnel in the field within just 35 minutes.
The crew usually consisted of four men–two pilots with one acting as a commander, a medic assigned to evacuate evacuating the wounded, and the crew chief whose role was also to keep the chopper in top condition
Once in action, the pilot and the helicopter commander remained in the aircraft, ready for take-off. The commander would maintain radio communication with the unit requesting evacuation and headquarters.
During those very risky moments, the medic and crew chief would jump into the fire and load casualties into the helicopter with the assistance of nearby soldiers.
It is important to note that most of these missions were undertaken during a skirmishes, so the helicopter would often come under a rain of small arms and mortar fire from the enemy. 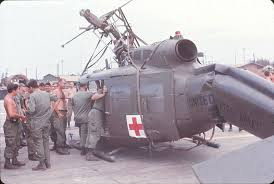 The Pilots and Medics of the "Dustoff" units were universally respected especially by their fellow Vietnam Veteran.  It takes a special kind of person to fly an unarmed helicopter to pick up woulded facing an enemy that really didn't believe in the "Geneva Convention" .
Posted by MrGarabaldi at 6:00 AM