My Thoughts on the Doolittle Raid

What brought this post about was the death of the final "Doolittle Raider" Colonel Cole joined the rest of his squadron.  it was a sad day for us as a Nation.  I had used the quote "Ordinary men stepped up and did Extraordinary things during Extraordinary times".  I had posted this following post on a friends Facebook post., but I decided to repost it here.  The Pics are compliments of "Sarge" 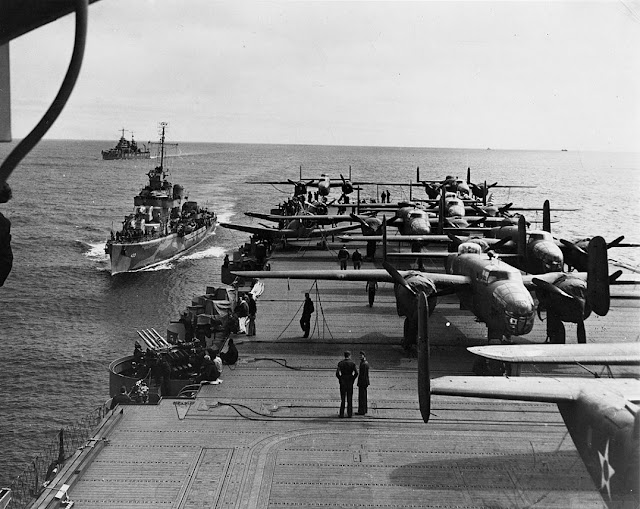 B25's strapped on deck, really good pic btw, and looks like there are a few SPD's mixed in with them.

FDR wanted a "Morale Raid" to show that the Americans can strike back against the Japanese Juggernaut. After the litany of bad news from the war in the Pacific, from Pearl Harbor, the Battle of the Java Sea, the loss of the Prince of Wales and Repulse, the surrender of Singapore. The fear that the American public of invasion was real. FDR had the American government intern all the people of Japanese ancestry. But in retrospect, it probably saved the lives of some of them because the fear was so real, reprisals were possible. The raid effect was all out of proportion to its actual damage caused. Yes a bomb did hit a Japanese light carrier the Ryuho, but if the ship was to be used in the battle of the coral sea I don't know. The effect on the Japanese psyche can't be measured. Until the attack in April of 1942, Japan has never been attacked by a foreign power, it totally rattled the Japanese and raised doubts about the direction of the war. It also greenlighted Admiral Yamamoto's plan to attack Midway and the Aleutians. The general staff comprised of both Army and Navy and they had to come to a consensus on the future prosecution of the war effort against the Americans. The General Staff had different priorities, the Navy viewed the Americans as the main threat, whereas the Japanese Army viewed the Russians as the main threat. The attack broke the deadlock on the General Staff and they gave Admiral Yamamoto approval for the Midway operation upon the completion of the Port Moresby operation which turned into the battle of the Coral Sea. Admiral Yamamoto continued with his "Operation MI" to catch the American carriers at sea and destroy them which would force the Americans to sue for peace leaving the Japanese with the land and resources that they captured. Then the "Greater East Asia Co-Prosperity sphere" would have been a reality. Instead the Americans surprised the Japanese with better intelligence and luck, and defeated the Japanese with 4 first line carriers sunk along with the myth of Japanese invincibility. The Doolittle Raid set the pins in motion that eventually defeated the Japanese, but it took about 3.5 years to do it. 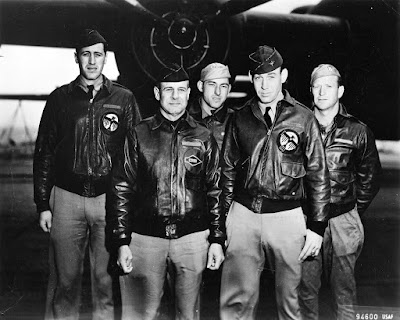 From left: Lt. Henry Potter, navigator; Lt. Col. James Doolittle, pilot; Staff Sgt. Fred Braemer, bombardier; Lt. Richard Cole, co-pilot; and Staff Sgt. Paul Leonard, engineer/gunner.
That being said, what those men did can't be discounted. They volunteered for a mission with a high risk factor going up against a nation that has defeated us several times already and they were willing to fly a medium bomber off a pitching carrier in the Pacific ocean, bomb a nation at the height of their power and then go for landing in China after overflying the huge alerted Japanese army in China. It took huge brass ones to do what they did. They inspired us when we needed it most. It brought hope to a battered nation. We are lessened by their passing.


Archived Movie released to American Theaters during WWII
Posted by MrGarabaldi at 9:35 AM