I am continuing songs that I don't care for.  It was catchy but corny, but it never grew on me.  I don't dislike it like Men at work song "Its a Mistake" .  but I don't care for it.  I will change the channel when this song comes one my Sirius/XM.  A lot of people really liked it, it was very popular in the clubs in Germany when I was stationed there.


"Wild, Wild West" is a song by The Escape Club from their debut album of the same name. The single hit the charts in late 1988 and eventually reached No. 1 on the Billboard Hot 100 the week of November 12, 1988, making The Escape Club the only British artist to have a No. 1 hit in the United States while never charting in the UK. 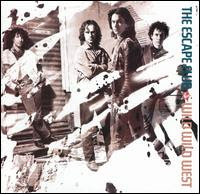 The lyrics, with phrases such as "I love her eyes and her wild, wild hair," "heading for the '90s, living in the wild, wild west," are augmented with gunshot, laser and blaster (a la STAR WARS) sound effects. Critics have noted that portions of the song bore a strong similarity to Elvis Costello's "Pump It Up" due to the distinct drum beat and vocal patterns during the verses.