This was supposed to "Drop" this morning, but for some reason it got hung up in the scheduler thingie.

I changed it up, on this day 31 years ago, Saddam Hussain invaded Kuwait, It was a milestone event for me and my friends in Germany, we got deployed to Saudi Arabia to defend the kingdom in case Saddam invaded them next, and it looked like he would, he certainly had the combat power to do so and the Saudi military couldn't have held them off.  What deterred him was the rapid deployment of the Americans to the Kingdom, something that wasn't expected.   The end results are well known, but I view everything as before "Desert Storm" and After.  I am sure others feel the same way.

I put my Long running theme on pause today on account of it being the day Saddam invaded Kuwait,   Just wanted to pause it I suppose.

I decided to go with a 4fer today.  I decided to roll with the "Streets of Fire" soundtrack.  I had bought the movie as a VHS and the soundtrack on CD.  I would up dubbing "What it means to be young" and I can dream about you" on a cassette tape that I would play in the Mustang while I was stationed in Germany.  To me the movie got a short shrift by the critics, the movie was pretty good and the soundtrack was awesome.  This was the 80's and the soundtracks could make or break a movie.  I do wonder what kind of lever actions they used in the movie.  They don't look like regular Winchester 1894 series rifles. to me....Found out...Marlin 336 Lever action in Stainless....Now I really want one...

Streets of Fire is a 1984 film directed by Walter Hill and co-written by Hill and Larry Gross. It is described in its opening credits and posters as "A Rock & Roll Fable".The film is a mix of musical, action, neo-noir, drama, and comedy, with elements of retro-1950s and 1980s. It stars Michael Paré as a soldier of fortune who returns home to rescue his ex-girlfriend (Diane Lane) who has been kidnapped by the leader of a biker gang (Willem Dafoe). Some of the film was shot on the backlot of Universal Studios in California, on two large sets covered in a tarp 1,240 feet long by 220 feet wide, so that night scenes could be filmed during the day. 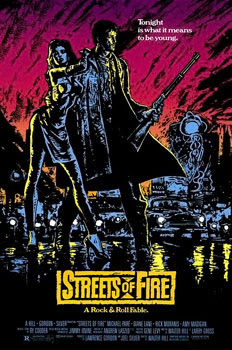 Jimmy Iovine produced five of the songs for the film and the soundtrack album. For Ellen Aim's singing voice, he combined the voices of Laurie Sargent and Holly Sherwood, billing them as "Fire Incorporated." The Attackers were the real-life (Face to Face) bandmates of Sargent, who provided the lead vocals on Ellen Aim's songs "Nowhere Fast", "Never Be You" and "Sorcerer", and supporting vocals on "Tonight Is What It Means to Be Young." The version of "Sorcerer," written and composed by Stevie Nicks, that was featured on the actual soundtrack album was performed by Marilyn Martin. The version of "Never Be You" that was featured on the soundtrack album was performed by Maria McKee.

Two songs written by Jim Steinman were part of the soundtrack: "Tonight Is What It Means to Be Young" and "Nowhere Fast", both performed by "Fire Incorporated", with Holly Sherwood providing lead vocals on the former and Laurie Sargent on the latter.

The title of the former was used as the tagline on some promotional materials for the film. Dan Hartman's selection "I Can Dream About You" is the most successful song from the movie, and became a Billboard top 10 hit in 1984 (also from his studio album of the same name). In the movie, the song is performed on stage at the end of the film by "The Sorels," a fictional doo-wop style group consisting of actors Stoney Jackson, Grand L. Bush, Mykelti Williamson, and Robert Townsend. However, the song was actually sung for the film by Winston Ford, whose vocals were lip-synched by Jackson in the movie. While there are thus two versions of the song, only Hartman's version was released commercially.
Steinman later recalled thinking the script was "terrible", but he thought the film was going to be a big hit, in part because of the enthusiasm of Joel Silver:


[He said] this movie is about visuals. It's about excitement, it's about thrills. Don't worry about the script... I remember mentioning it to six or seven people that the script was trashy and I always got the same answer... The script doesn't matter. This movie is about visuals... Then we go to the first edit, the first cut of the movie in the screening room and it's [Jimmy] Iovine and me and Joel Silver... And about 20 minutes into the movie Jimmy turns to me and he goes... this movie is really shitty isn't it? It's really bad. I said, yeah, it's a really bad script. Why didn't anyone notice that the script was bad? It stinks. I can't even watch it... Joel's on the other side going, what am I gonna do next? There's gotta be a next project, and they're sitting there and there's so many lessons I learned during that movie. It went $14 million over budget, I think and I kept saying to Joel, how are they allowing this? 'Cause they kept screaming at us, it's over the budget. I said, how, and they, you've gotta understand, they built all, Walter Hill didn't want to go to Chicago. The story took place in Chicago, so they built Chicago in LA.

Steinman has said the filmmakers were convinced they would have the rights to the Bruce Springsteen song Streets of Fire, and filmed an ending using it. However, when they realized they would not get it in time, they asked Steinman for a song, which he wrote in two days. The song was "Tonight what it means to be young"

Two music videos accompanied the song. One does not feature Hartman and consists of scenes from Streets of Fire, intercut with footage of the Sorels miming the song as part of a live performance. The lead singer was played by Stoney Jackson, with Grand L. Bush, Mykelti Williamson, and Robert Townsend as backing singers. In the second video, filmed at the Hard Rock in London, Hartman appears as a bartender trying to charm a young woman (played by Joyce Hyser), singing to her as the Sorels' performance plays on a TV set hanging above the bar. In a 2010 interview with Hyser for the blog Old School: Back to the 80s, she was asked how she came to feature in the video. She replied, "I knew Dan's manager and he asked me if I would do it. We shot at the Hard Rock in London. I honestly remember very little about it, but Dan was very nice and I absolutely love that song. I did another music video for ZZ Top's song "Pin Cushion" which I really like. It was directed by Julian Temple."
While recording a mimed TV performance of the song, Hartman explained why one music video featured actors: "The producers and directors of Streets of Fire wanted the best of everything, so they hired the best singers, the best dancers and best actors to play the parts in the film. So the singers in "I Can Dream About You" who are the Sorels are actually actors, and I wrote and sang this song."

The Dan Hartman Version of the song.
Posted by MrGarabaldi at 9:03 PM