Monday Music "I Ran" By A Flock of Seagulls

I figured it would scar the alphabet boys if they come busting in and hearing a song about people having a good time and standing up for themselves and having New Wave playing Loud will scar the Alphabet Boi's as they force the stack through the door, because they will be exposed to good music for the first time unlike the crap they listen to now sipping their soi latte's and comparing notes on the latest soyburger recipes and who wears the best manbuns in the team.

A Flock of Seagulls was started by Mike Score in late 1979 in Liverpool. According to Mike Score, the band's name was taken from the song "Toiler on the Sea" by punk rock band the Stranglers and the book Jonathan Livingston Seagull. The original line-up of the band featured Mike on lead vocals and keyboards, Ali Score on drums, and Frank Maudsley on bass. Guitarist Willie Woo was added, while Mark Edmondson replaced Ali on drums when the Score brothers fell out. Soon afterwards, Edmondson departed to make way for a returning Ali, while teenager Paul Reynolds, a close friend of Edmondson, replaced Woo at the behest of Maudsley, thus creating the band's classic line-up. The band practised above Mike Score's hair salon and then started playing clubs, eventually signing a recording contract.

They recorded sessions for John Peel's show on BBC Radio 1 in May 1981.Eventually, under the management of Harry Maguire, Tommy Crossan, and Mick Rossi, all directors of Checkmount Limited, they began to release singles through Jive Records. The group released their debut single "Talking" (produced by Nelson), on Bill Nelson's Cocteau label. They were then signed to major label Jive, distributed through CBS records, where they released their second single "Telecommunication". The single was also produced by Nelson and became a club hit. Their third release was the EP "Modern Love is Automatic". Originally released as a 4 track EP on both 7" and 12", the 12" edition was soon reissued, adding "Telecommunication". This 5 track EP was also their first release in the U.S. In 1982, the group's fourth single "I Ran (So Far Away)", produced by Mike Howlett, the former bass player of the band Gong, became a worldwide hit, reaching number 1 in Australia and the Top 10 in both the US and New Zealand. Their debut album and single "Space Age Love Song" were both successful. The track "D.N.A." won a Grammy Award in 1983 for Best Rock Instrumental Performance.  In late 1982, the band finally found major success in their home country with "Wishing (If I Had a Photograph of You)", the first single from their next album Listen, which reached the Top 10. Later, the band was praised for having broken the ground for other musical acts during the advent of the video music area,  but as it turned out, 1982 was the peak year of their commercial and critical success. 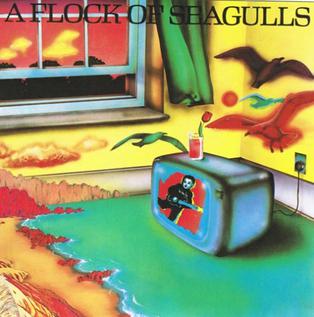 "I Ran (So Far Away)", also released as "I Ran", is a song by English new wave band A Flock of Seagulls. It was released in 1982 as their third single and it was the second single from their self-titled debut album. It topped the chart in Australia, and reached number seven in New Zealand and number nine in the United States, although it failed to make the top 40 in the band's home country (United Kingdom). However, the song was certified silver by the BPI.

In an article for Rolling Stone titled, Anglomania: The Second British Invasion, Parke Puterbaugh wrote of the impact of the song's music video on its US chart success, "Fronted by a singer-synth player with a haircut stranger than anything you'd be likely to encounter in a month of poodle shows, A Flock of Seagulls struck gold on the first try."

The single was promoted by a distinctive music video directed by Tony van den Ende in which the band members performed in a room covered in aluminium foil and mirrors. The cameras used to film the video are clearly visible in many of the background reflections, their stands also covered in foil. The video is an homage to Brian Eno and Robert Fripp's (No Pussyfooting) album cover, which was also portrayed by the Strokes in the video for their single, "The End Has No End," two decades later. The video received heavy rotation on MTV in the summer of 1982, and helped the single to become a hit.

As Dave Thompson has pointed out, the song was "punningly political at a time when Iran itself was making headlines around the clock". The song and the band were an "irresistible" package for American audiences, and by the summer of 1982, "America was clutching [sic] Flock of Seagulls to its heart". According to Maz Jobrani, the release of the song was a "disaster" for Iranian-American children like himself. They were cruelly teased by other American children with the song's misheard chorus: "I-ran, I-ran so far away."

The band toured the United States extensively to promote the single, supporting Squeeze on their 1982 tour. As well as reaching number 9 on the Billboard Hot 100, "I Ran" peaked at number 3 on the Top Tracks chart and number 8 on the Hot Dance Club Play chart. Subsequently, the album reached number 10 on the Billboard 200.

Although considered a 1980s new wave classic, the song experienced something of a revival in 2002 as the signature theme for the video game Grand Theft Auto: Vice City, being played during the game's television commercials and during gameplay as one of the songs in the playlist for radio station Wave 103.

The song's apparent references to Iran were highlighted again in the fall of 2007, when the long-running American television show Saturday Night Live ran a parody version of the song that expressly mocked current Iranian policies like Holocaust denial.