Meatloaf Crosses beyond the Rim

Bummer, I remember when we first started dating, and we were together about 6 months at this time, we were poor as church mice, and I remember Meatloaf coming to Lakewood amphitheater in Atlanta in 1994 and I really wanted to go and My Spousal Unit gave me a hallmark card(one of her super powers) , I opened it up and 2 tickets fell out. Granted they were lawn seats but that was a heck of a concert and Meatloaf told his fans "thank you for staying with him all this time". I was listening to the 80's Channel on the way home and the VJ Mark Goodman from MTV Fame talked about "Meatloaf and the impact and he then played the song from Meatloaf's 1993 Album "Bat out of Hell" back Into Hell 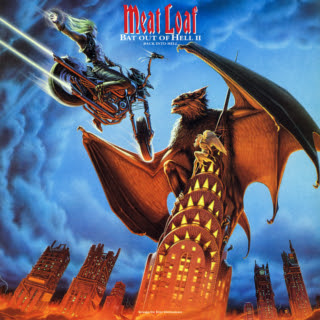 Man it brought me back the memories of back then when we were dating and the salad days and times were hard but we stuck it out until times got better, and the little gestures that mean a lot.
May God grant his family serenity during this time.
I snagged the article from "Hollywood Reporter"
Born Marvin Lee Aday on Sept. 27, 1947, in Dallas, Meat Loaf was the son of Orvis, a former police officer, and Wilma, a schoolteacher. “Meat” was a nickname his father gave him, the singer told Oprah Winfrey in 2016, explaining that he was “born bright red” and looked like “nine-and-a-half pounds of ground chuck.” His home life was disruptive due to his father’s alcoholism, and he spent some time living with his grandmother.
He left Texas for Los Angeles in 1967 to pursue a music career. His first band, Meat Loaf Soul, had a number of name changes, including Popcorn Blizzard and Floating Circus. and toured with acts such as The Who and the Grateful Dead, but only achieved fringe success. Working odd jobs, he had a chance encounter that would lead to an audition for the L.A. production of the musical Hair.
On the strength of his performance in Hair, Meat Loaf was offered the chance to record his first album by Motown Records. Working with Stoney Murphy, Motown released Stoney and Meat Loaf in 1971, but once again success was limited and Meat Loaf returned to work on the Broadway production of Hair.
In the early 1970s, Meat Loaf met Steinman and starred in his Vietnam War musical More Than You Deserve. The two then began a fruitful artistic collaboration, with Steinman writing and composing the music and Meat Loaf singing and bringing his charisma and stage presence as the frontman.
The duo started work on the operatic rock album Bat Out of Hell in 1972. It was not released until 1977 and went on to become a huge global hit, selling more than 40 million copies. The album spawned the singles “Paradise by the Dashboard Light” and “Bat Out of Hell” and made Meat Loaf a household name.
Despite Steinman’s integral creative input, Meat Loaf, with his name on the album, was firmly front and center when it came to promotional materials and was the star attraction at live shows. The apportioning of credit and royalties for the success of Bat Out of Hell would lead to difficulties and even legal strife between the pair in later years.
“I know there’s people out there that think I was the Frankenstein monster to Jim’s Dr. Frankenstein, but that’s not how it went at all,” Meat Loaf told the New York Times in 2019. He added, “I never do anything the way the writer intended it. Jim wrote it, but it became my song.”
Meat Loaf and Steinman patched up their differences to work on 1981’s Dead Ringer and 1984’s Bad Attitude, but both albums were commercial failures. In 1993, Meat Loaf and Steinman worked together on Bat Out of Hell II: Back Into Hell, which featured the global No. 1 single “I’d Do Anything for Love (But I Won’t Do That)” with a video directed by Michael Bay. The album went multiplatinum and would lead to Bat Out of Hell III: The Monster Is Loose, in 2006.
Meat Loaf and Steinman’s final two collaborations included the album Braver Than We Are in 2016 and Bat Out of Hell: The Musical, which debuted in London’s West End in 2017 and played off-Broadway in 2019.
Meat Loaf branched out into movies in the early ’70s. He memorably played motorcycle-riding Eddie in the cult film The Rocky Horror Picture Show (1973), having played him as well as Dr. Everett Scott in the musical version. In the film, Eddie sings the song “Hot Patootie — Bless My Soul” before meeting his demise.
He gave a scene-stealing performance in David Fincher’s Fight Club (1999), playing Robert “Bob” Paulson, a former steroid-popping wrestler suffering from gynecomastia. Hours after Meat Loaf’s death, “Robert Paulson” began to trend on social media as fans of the film paid tribute to him by posting stills and video and the valedictory quote from the film related to his character: “his name was Robert Paulson.”
His other notable film credits included playing Tiny in Wayne’s World (1992), the Alan Rudolph film Roadie (1980), the Patrick Swayze film Black Dog (1998) and cameos in Spice World (1997) and Tenacious D in the Pick of Destiny (2006).
On television, his long list of credits included episodes of Elementary, Glee Nash Bridges, Ghost Wars, South Park, The Outer Limits and The Equalizer. He also appeared on The Celebrity Apprentice in 2011.
In later life, Meat Loaf suffered a series of health problems. He underwent heart surgery in 2003 and collapsed during concerts in Pittsburgh in 2011 and in Edmonton, Canada in 2016.
Survivors include his wife and daughters.
Posted by MrGarabaldi at 9:31 PM

Email ThisBlogThis!Share to TwitterShare to FacebookShare to Pinterest
Labels: Meatloaf