This is something new, I remember reading about the "Boeing SST" and that we were using it to compete and surpass the "Concorde", our national pride was at stake, but the tree huggers were outraged and they didn't want us spending money on something "Wasteful", besides there was the "War on Poverty"to win you know...Well anyway I have  a collection of books I got in the 1980's from Time life called "Epic of Flight" 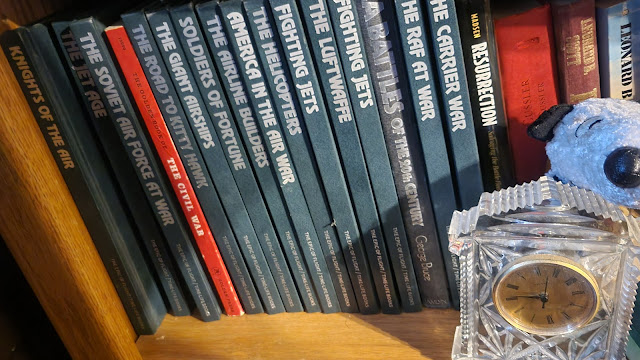 Here the Books are on one of my book shelves...One day I will take pics of all my shelves in my bonus room. 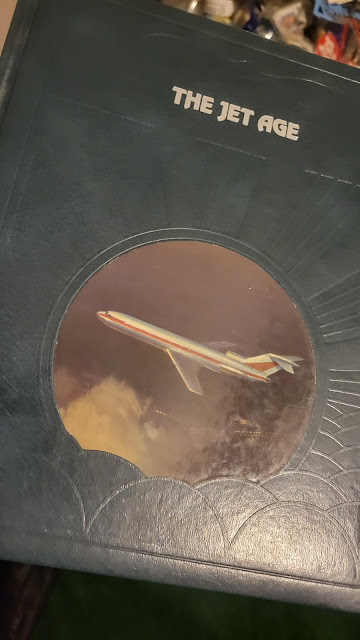 Here is the Book in question, it explained the arrival of the DE Haviland Comet, the first Commercial Jetliner....Not the 707 or the DC-8 like most people thought, to the arrival of the Concord and the American SST and the Soviet Tupelov 144 or the "Concordski" as everyone called it. 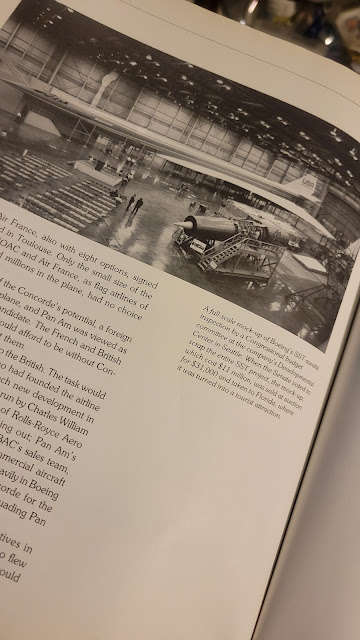 And here was the picture of the plane from the book, and it gave a good description of the SST and something about the Concord that isn't common knowledge...When, I binge watched the "Airport" disaster movies and it sequels and found out things about the planes in the movies...I"Did this post in 2014 about the Airport disaster movies airplanes used" As far as the new supersonic planes goes, a couple of the mainline carriers are really interested, my employer was interested in the SST, but the have a hands off policy on this one right now, they rarely buy a plane "out of the gate" first, they let someone else deal with the teething issues before we buy them.  Also with the sonic boom restrictions and other things, I don't know how economically feasible this plane will be, American carriers are not subsidized by the government unlike foreign carriers, especially flag carriers, because it is a matter of national pride.  The closest we had to a national carrier was "Pan Am".  It will be interesting for no other reason but for the technology that will be developed.

COLORADO SPRINGS—American Airlines has announced plans to acquire up to 60 Boom Supersonic Overture airliners, overtaking United Airlines as the biggest customer yet for the in-development Mach 1.7 transport.

The contract, which comes less than a month after Boom unveiled a significantly redesigned Overture production configuration based on four engines, is made up of 20 firm orders and 40 options. Including the United selection, which was announced in 2021, the American deal takes Boom’s firm orderbook to 35.

“Going from zero to one [firm order] last year with United was obviously huge for us, but I think going from one to two in some ways is even more significant,” Boom founder and CEO Blake Scholl tells Aviation Week. “That’s because it shows that lots of airlines are reaching the same conclusion and for that reason, it’s a big build of momentum.”

No financial terms for the American deal have been disclosed.  However, Scholl says “everyone’s got their different definition of firm. When I say firm, I mean there’s a significant non-refundable deposit.”

In terms of overall order totals, the Overture can now be ranked ahead of the Anglo-French Concorde, adds Scholl. “Only 14 [Concordes] ever entered service and they were basically given away. American and United have committed capital to this and both have made deposits—so your 35 aircraft eclipses Concorde by more than double.”

Together with 15 firm and 35 option Overtures ordered by United, and 20 “pre-order” production positions reserved in 2017 by Japan Airlines, the American commitment brings the total Boom orderbook tally to 130 aircraft. Virgin Atlantic also previously announced purchase options on 10 Overture aircraft, though these are no longer listed.

Boom’s ambitious schedule envisages rollout of the prototype Overture in 2025 and introduction of the first civil supersonic services on transatlantic and transpacific routes around 2029. The Overture will be designed to cruise at Mach 1.7 and carry up to 80 passengers on routes up to 4,250 nm using 100% sustainable aviation fuel (SAF), while simultaneously meeting stringent ICAO Chapter 14/FAA Stage 5 take-off and landing noise limits.

Overall development costs are expected to be in the $6-8 billion range, which will be supported through equity fundraising, airline prepayments, supplier commitments and other sources, a Boom representative previously told The Denver Gazette.

American says the Overture will “introduce an important new speed advantage” to its fleet. In a cautiously worded joint statement issued with the Denver-based aircraft developer, the airline adds that, “under the terms of the agreement, Boom must meet industry-standard operating, performance and safety requirements as well as American’s other customary conditions before delivery of any Overtures.”

Derek Kerr, the airline’s chief financial officer, says American selected the Overture because “looking to the future, supersonic travel will be an important part of our ability to deliver for our customers.” American previously dallied with supersonic flight in the 1960s, reserving options on six Concordes between 1963 and 1965. However, these were canceled amid mounting environmental concerns and the global oil crisis in 1973.

No specifics have been released of where and how American anticipates operating the aircraft, but Scholl says, “I think they will be making gametime decisions on what are the launch routes, but what we can say is there are a whole bunch of routes in American’s network that make sense for Overture to be able to fly with big time savings and profitably.” These could include Miami to Paris in just over four and a half hours, and Los Angeles to Honolulu in three hours.

While the American announcement adds growing momentum to the Overture program, Boom has yet to reveal details of the all-important propulsion system—further delays to which will almost certainly add greater pressure to an already compressed development schedule. However, despite recent non-committal comments from Rolls-Royce which was contracted to conduct engine studies for Boom over potential future collaborative developments, Scholl suggests that a propulsion solution will be announced in coming months.

“We’ve got technology options that meet all of our needs, including the design work that Rolls has finished. Our focus is very much on developing the right business model for the engine. Historically, those models have not been very customer friendly, and we want to do something that’s not just a breakthrough in the engine technology, but something that is a breakthrough in the business model,” Scholl says.

Scholl emphasizes the initiative is directed at the way the engine will be supported and operated in service, rather than its development. “Getting that right is a big focus, and so when we make the engine announcement, you’re not just going to hear about the engine technology, you’re going to hear about a very different approach to the business,” he adds.

Building on a busy period at the recent Farnborough Airshow—at which Boom announced additional suppliers as well as a strategic partnership with Northrop Grumman to develop a special mission variant for the U.S. Government and its allies—the company says further disclosures are in the pipeline. “There’s going to be more news over the coming months with additional suppliers, customers and other developments,” Scholl says.

In addition to propulsion, Scholl says upcoming supplier announcements will cover areas including aerostructures, flight controls and other systems on the aircraft. Scholl says, “We are expecting to have more tier one [suppliers] selected here in the next few months, and then we’ll be significantly expanding that effort in 2023 as well—the supplier momentum I’ll say is phenomenal.”

Boom is also starting to outfit a newly opened 70,000-ft.2 Iron Bird ground-test facility in Centennial, Colorado, where the XB-1 subscale flight-test vehicle has also been developed. The site will house the full-scale Overture testing model and flight deck simulators.

Taxi tests of the XB-1 have meanwhile begun after a cautious safety-driven build-up approach. Although this has taken longer than originally expected, Boom says XB-1 tests are expected to transfer to Mojave, California, later this year.

Posted by MrGarabaldi at 8:55 AM