Poland has gone on a spending session to upgrade their Armed Forces.

I am including two articles, one from Business Insiders and the other from "SOFREP".  The first one from Business Insider about the Poles buying from the South Koreans, this is a huge plug for the Korean Defense industry and they do build good stuff and the Poles are understandably concerned about the "Friskiness" of Russia and they want to make sure that especially if the Ukraine falls, the Russians won't try to "annex" them next, after living under the boot of communism for 40+ years and having the Nazi's invade first, the Poles are understandably concerned.  And from the second article, having the Germans being obstinate about the Leopard 2 purchases makes me wonder what the concerns are and what game the Germans are playing, if they are playing "Vassals" of the Russians already since they are slaved to Russian gas and energy because they killed their own energy independence that I Blogged about earlier.  Poland already has told Brussels more than once to "pound Sand" during the migrant invasions because they refuse to accept any, the Eastern European countries haven't forgotten what totalitarianism is whereas the Western European countries have.  The Western European countries are a lot "softer" mentally then the east, just my opinion. 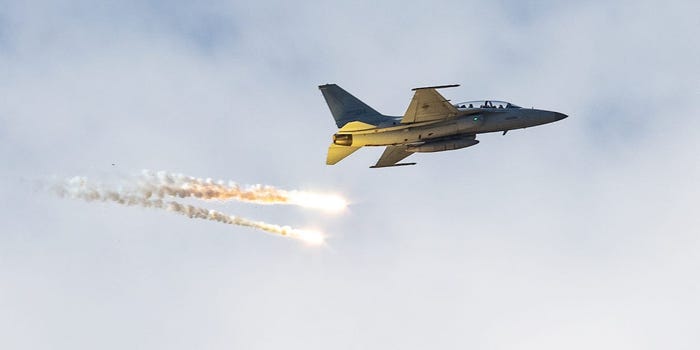 A South Korean Air Force FA-50 at the 2021 Seoul International Aerospace and Defense Exhibition on October 18, 2021.

On July 27, Poland signed one of its largest arms deals ever for more artillery, tanks, and aircraft to modernize its military amid heightened tensions in Europe.

The size of the contract and Warsaw's decision to buy from an emerging military exporter also reflects thinking influenced by the fraught state of European geopolitics.

"The criminal assault carried out by the Russian Federation, targeting Ukraine, and the unpredictable nature of Putin means that we need to accelerate the equipment modernization even further," Polish Defense Minister Mariusz Błaszczak said in an interview with Polish outlet Defense 24.

Quickly modernizing the Polish air force is a priority for Warsaw, which is seeking to replace its 23 MiG-29s and 18 Su-22s — aging Soviet-designed multirole aircraft that are increasingly hard to maintain.

Poland already fields 36 US-made F-16s and it ordered 32 F-35A stealth jets from the US in 2020, but it is one of only three NATO countries with MiG-29s and the only European country that still flies the Su-22.

The 48 FA-50s from South Korea will help Warsaw advance that modernization effort.

The FA-50 is a capable light combat aircraft. It can reach supersonic speeds of Mach 1.5 and carry a variety of bombs and air-to-air and air-to-ground missiles. Poland will receive the enhanced Block 20 model that is compatible with NATO systems, according to Błaszczak.

However, Poland chose the FA-50s for not only its combat capability but also the speed with which it could be acquired. Warsaw also looked at other aircraft, including F-16s, but none could be delivered fast enough.

"It is of key importance to increase the levels of security as fast as possible for Poland," the Polish defense minister said. The Polish Air Force is set to receive the first 12 FA-50s by mid-2023.

Further, the FA-50 is based on South Korea's T-50 trainer and light combat aircraft, which Korea Aerospace Industries developed in collaboration with Lockheed Martin, which builds the F-16.

Therefore, the FA-50 shares design elements and components with the F-16, simplifying maintenance and pilot training.

"A pilot who has been trained on FA-50 only needs a few hours to start flying the F-16 on his own," Błaszczak told Defense 24. "The cost of training as such is much lower, and thus we would be able to train more pilots."

According to the contract with South Korea, an FA-50 maintenance and service facility will also be established in Poland by 2026. With this arrangement, Warsaw hopes to avoid the supply-chain and maintenance issues plaguing its MiG-29s and Su-22s.

"Thanks to that procurement, we gain a new direction for spares, which is especially important for high-intensity conflicts, when one of the supply chains could be disrupted," Błaszczak said. "This would make it possible to maintain the operational availability of combat aircraft in Poland at a top level."

Time for a renewal

Poland has upgraded its aging Soviet-era jets a number of times to keep their systems NATO-compatible, but keeping them combat-worthy is a challenge — especially as a shrinking user base and sanctions on Russia limit the availability of spare parts.

"We would need to procure [spares] in Russia, and this, for reasons that remain obvious, needs to be ruled out," Błaszczak said, alluding to tensions with Moscow.

Poland's Su-22s have also been in service for nearly 35 years and their role is limited.

The FA-50s will further modernize the Polish Air Force, but they will not be the "last move," the defense minister said.

"We have accelerated the delivery of the F-35s. In the long run, we are planning to procure extra F-35s or F-15s, and we are watching closely the progress made by our South Korean partners when working on the KF-21 Boramae," Błaszczak said, referring to the new 4.5-generation multirole fighter that South Korea hopes to market as a cheaper alternative to the F-35.

Not every nation in the world is willing to send tanks to Ukraine to help them fight off the Russians. However, one country that has not been afraid to do so has been Poland. According to the Ukrainian multimedia platform Ukrinform, Poland has sent more than 240 tanks to its neighbor. In addition, they’ve also sent more than 100 armored personnel carriers. The combined value of the weapons the Poles have provided to the Ukrainians totals over $2 billion.
Ukrinform tells us that in an interview with the German newspaper Bild, Polish President Andrzej Duda stated, “We sent[T-72] tanks from Poland to Ukraine: almost two combat tank groups. There are more than 240 tanks that the Ukrainian army can service. We have sent almost a hundred armored personnel carriers.” He went on to mention that they also sent aid in the form of ammunition, small arms, and other types of various military equipment.
As he was depleting his nation’s weapons arsenal, President Duda made it clear that he expected his Western allies to help make up for their shortfall with weapons systems of the latest generation. Especially American weapons. He also explicitly mentioned wanting Leopard 2A4 main battle tanks from Germany. No doubt about it, the Germans build a good tank. However, there have not been any indications that the Germans were willing to share more of them with their NATO ally anytime soon.
In addition to the tanks, The Wall Street Journal reports that the Poles have provided Grad rocket launchers, self-propelled howitzers, and other Soviet-era weaponry from the older stock in their arsenal. The Ukrainians were quite glad to put it to use. One senior official is quoted as saying, “Ukraine got more from Poland than it asked for.”
The Journal says Poland is not the only nation to give tanks to Ukraine. The Czechs have provided a couple of dozen T-72s. Mykhailo Podolyak, a senior Ukrainian Presidential aide to Volodymyr Zelensky, announced through Reuters that it would be sending tanks as well as airplanes to help the war effort in Ukraine. He stated, “Many nations are showing more courage today than half of the G20 [Group of 20 major economic powers]. Like North Macedonia, giving Ukraine a (supportive) shoulder in the form of tanks and planes.”
Ukraine Weapons Tracker has reported via Twitter that North Macedonia is doing its part by donating at least 8 T-72 tanks to Ukraine.
https://twitter.com/UAWeapons/status/1552975117336076290?ref_src=twsrc%5Etfw%7Ctwcamp%5Etweetembed%7Ctwterm%5E1552975117336076290%7Ctwgr%5Efc663d07752c9d2bc23fff86d90426a1c891b70a%7Ctwcon%5Es1_c10&ref_url=https%3A%2F%2Fsofrep.com%2Fnews%2Fpoland-to-arm-themselves-with-hundreds-of-abrams-tanks%2F

Ukrainian News reports that a deal was in place for Greece to send older German-built tanks to Ukraine, but that the deal was squashed at the last minute. The cause was something to do with the Germans refusing to backfill tanks in Greece once they donated theirs to Ukraine. Unfortunately, there is a lot of that kind of thing happening lately. Recently, Germany blocked the transfer of their tanks to Ukraine via Spain.

The Greek Minister of Defense was not pleased with the indecisiveness of the Germans. Regarding the stop of the transfer, he said, “This is a circus. Mockery of Ukraine and Greece. There is simply no basis for this action.” He also spoke out loud about what many in the defense community have been talking about quietly for some time, “Olaf Scholz [the Chancellor of Germany] does not want to help Ukraine directly, but does not want to admit it openly.” For whatever reason, some Western nations fear that sending main battle tanks to Ukraine will be looked at by the Russians more harshly than sending other weapons systems such as rocket launchers.

US News and World Report have written that the Polish Defense Minister, Mariusz Blaszczak, informed them that his nation would buy 116 used Abrams main battle tanks (version not specified) from the United States. This is in an attempt to rebuild and strengthen their armed forces after giving so much military aid to their embattled neighbor, Ukraine. Following Russia’s February 24th invasion of Ukraine, Poland has pledged to double the size of its army and allocate 3% of its gross domestic product to defense spending. This is in preparation for any possible future attack should the Russians push east beyond Ukraine’s borders.

Blaszczak, during an interview with Polish public TV broadcaster TVP Info, stated, “We agreed [to] a contract with the USA concerning the purchase on preferential terms of 116 used Abrams tanks,” saying that the deal would “significantly strengthen” the Polish defense posture.

This most recent purchase order comes on the heels of a contract to buy 250 Abrams tanks from the US. That deal was inked in April. Compared to the T-72, the Abrams will greatly enhance Poland’s defensive capabilities. The T-72 is a medium-weight tank at 44 tons, while the Abrams weighs in at almost 70 tons; much of that extra weight comes as armor protection. The Abrams can also kill a T-72 beyond the effective range of the T-72’s main gun.   We can also expect that the crew quality of Polish tankers will far exceed that of their Russian counterparts if recent experience in Ukraine is any indication.

Posted by MrGarabaldi at 6:35 AM