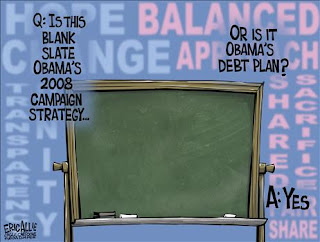 Borrowing Is No Longer Stimulus?
The Congressional Budget Office not long ago forecast that Barack Obama’s $1 trillion-plus annual deficits — scheduled over the next decade — would result in almost another $10 trillion in aggregate debt. Going back to the pre-Bush tax rates this time won’t balance the budget. Slashing discretionary spending will not. So large has the splurge become, and so hooked are the constituencies of federal money, that massive cuts to entitlements necessary to stave off financial implosion may well prompt Greek-like protests.
That staggering sum was apparently conventional wisdom until the November 2010 election. But now there is fear that at some point in the future, Obama will not be known as the first African-American president. Nor will he be cited even as the hope-and-change phenomenon of 2008. Instead, posterity shall know him as the single greatest borrower in American presidential history, a novice who nearly wrecked the U.S. economy by borrowing over $4 billion a day without any feasible proposal how to pay back such a vast sum — taking a post-recession recovery and turning it into a stagflationary mess. In the third year of his tenure, Obama is still left only with “Bush did it” as an explanation of what went wrong.
Obama has managed the nearly impossible: the greatest peacetime deficits in U.S. history — about $1.5 trillion per year — in his first three years achieved almost no economic expansion. Instead, unemployment is chronic and stays over 9.2%; growth is stagnant; gas is sky-high — and the president seems stunned that none of what he had promised came to pass. All his liberal nostrums have been tried and been found wanting. There is no successful EU model, no winning blue-state statist paradigm for guidance.
Remember that his key advisors — Goolsbee, Orszag, Romer, Summers — have now quit and did not last even three years, their policies orphaned by the very parents who spawned them. Even the president joked that “shovel-ready” was a joke. When he evokes “stimulus” and “investment,” in response, we do not even think “borrowing” and “taxes,” but rather “he’s clueless again.” The old argument that we simply did not borrow enough (say, $5, $6, $7 billion a day?) is laughable beyond the point of caricature, given that the administration followed the Bush record of record peacetime debt. The only mystery is whether the massive Obama borrowing was a product of incompetence, a poorly thought out gorge the beast way of increasing taxes and redistributing income, or a more cynical effort at creating a permanent constituency of millions of new food stamp recipients and federal workers. Or more than that still.