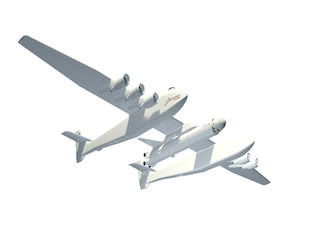 The Stratolaunch will soon take tourists into space
Microsoft co-founder Paul Allen is teaming up with aerospace pioneer Burt Rutan to build a giant machine that is part airplane and part spaceship. The new vehicle will be able to transport people and cargo into Earth's orbit and is scheduled to be commercially available by 2016. Unlike traditional rockets, the Stratolaunch will not require a launch pad for liftoff. Instead, the plane will ascend to a heightened elevation--and then the rocket portion of the craft will release and blast the ship into space.
You can watch a computer simulation of a Stratolaunch mission here

Powered by six 747 engines, the new craft should also be far more fuel efficient than traditional shuttle launches, since it will bypass the standard supply of expensive rocket fuel needed to propel a shuttle up from the ground.
The craft will also be enormous, with a wingspan of 385 feet, (making it larger than a football field) while weighing 1.2 million pounds.

And the Stratolaunch will not be restrained by the factors that normally dictate when a shuttle can launch into space from the ground.
Allen and Rutan are competing with other private companies in a race to deliver people and goods to the International Space Station, now that NASA has cancelled its space shuttle program.
The pair are teaming up with another Internet mogul, Elon Musk, founder of PayPal and Tesla, who is providing funds for the spaceship and booster components.
Allen is no stranger to space exploration, having already won the Ansari X Prize in 2004, for his sponsorship of a craft that went into space but not into orbit. If all goes to plan, the Stratolaunch program will be involved in satellite transport--while also promoting space tourism.


I am glad to see  the American Entrepreneurship still existing in America.  With Obungler pulling NASA out of the space program and we have to pay the Russians to get our people to the space station.  The fees that the Russians are charging have gone from 51 million per seat to 62 million per seat.  Nothing like having no competition and we are giving money to our potential adversaries.  I hope this works, I'd rather have Americans fly Americans to the station rather than paying Russians.  It is part of our national pride.
I got this article from Yahoo News
Posted by MrGarabaldi at 12:14 PM