White House will ask formally to raise the debt limit...again 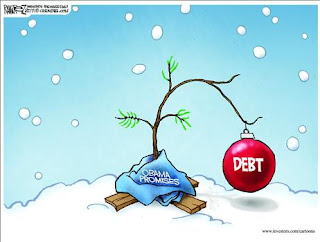 WASHINGTON (Reuters) - The White House plans to ask Congress by the end of the week for an increase in the government's debt ceiling to allow the United States to pay its bills on time, according to a senior Treasury Department official on Tuesday.
The approval is expected to go through without a challenge, given that Congress is in recess until later in January and the request is in line with an agreement to keep the U.S. government funded into 2013.
The debt is projected to fall within $100 billion of the current cap by December 30, when the United States has $82 billion in interest on its debt and payments such as Social Security coming due. President Barack Obama is expected to ask for authority to increase the borrowing limit by $1.2 trillion, part of the spending authority that was negotiated between Congress and the White House this summer.
Under the agreement struck in August during the showdown over the government's debt limit, the cap is automatically raised unless Congress votes to block the debt-ceiling extension. Lawmakers have 15 days within receiving the request to vote, which is largely symbolic because the president can veto it and Congress would be unlikely to muster the two-thirds majority to override it. Moreover, the U.S. House of Representatives also is in recess until January 17.
The deal called for raising the debt ceiling by $2.1 trillion to serve the nation's borrowing needs into 2013 and also included mandatory cuts to the federal budget deficit. Since then, the extension has been increased twice by a total of $900 billion.
The debt limit currently stands at $15.194 trillion and would increase to $16.394 trillion with the request.
(Reporting By Margaret Chadbourn; Editing by Chizu Nomiyama)
Run up the debt again.....stuff that our kids will have to pay off.  Because the gov't has no fiscal discipline, everybody else except the feds have to budget their money.   The senate hasn't passed a budget in over 1000 days.  No problem, they have an unlimited credit limit......and our kids and grandkids will pay it.
Posted by MrGarabaldi at 5:21 PM

Email ThisBlogThis!Share to TwitterShare to FacebookShare to Pinterest
Labels: budget, Elections have consequences