Miracle on the Hudson Pilot Returns to Cockpit of same Plane

I saw this on CBS news here
There are many pictures:) 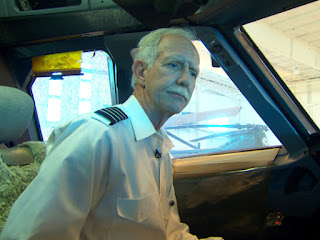 As an Aviation fan I saw this and liked the article.   Even though I rag on Airbus for their design philosophy in trying to take the pilot out of the equation as much as possible.  If Capt Sully had been driving a Boeing 737, he wouldn't have had to ditch.  The pilot on the Boeing has the ability to overide the computer.  Whereas on the Airbus they don't.  What happened was that when the birds flew into the engines of the A320 the sensors got clogged with bird guts and no air moving through the sensors the computer on the Airbus assumed that the plane wasn't moving, so as to not damage the engines, it idled them.
I have the utmost respect for Capt Sully, what he did was a phenomenal job of flying, that flight and landing  was textbook, it couldn't have been done better than that.   Capt Sully deserves all the kudos's and accolades that he got.
Posted by MrGarabaldi at 11:45 AM