I do want to ask all these lawmakers and various pundits that want to ban firearms and actually seize them from people.  How you gonna do that?  Have the sons and daughters of the "unwashed masses"  break down doors to peoples houses while you stay in your ivory tower or legislative office and try to impose  your belief by imperial fiat? And feel smug that you are wiser and worthy of leadership of the people because of your position, that the "HOI POLLOI" would be lost without someone of your wisdom to guide them to the great socialist utopia that is just beyond the horizon that all would be great with unicorns jumping over rainbows and other socialist beliefs.   You gotta be kidding me...  Again let me ask, are you ready to die for your belief?  Are you ready to lead the stack into somebody's house to seize firearms and implement other socialist ideals and doctrine that the messy old U.S. Constitution gets in the way....You know..the document that was written by landowner white males and some were slave-owners.The Horror  That document that enshrines the inalienable rights that we have granted by our creator, the rights that are our protection against tyranny.   Yeah...those rights that are INDIVIDUAL rights...not group rights granted by a benevolent government that can givith and taketh away depending on who is in charge at the time.   Again Let me ask you....Are you willing to die to impose your beliefs on other people...?   Millions of gun owners are willing to fight for their belief in the U.S. Constitution and the 2nd amendment.  They view it as the last check in the system to prevent governmental tyranny.  For that reason they are willing to die to protect the way of life that has risen soo many into the middle class and lifted an entire society to the envy of the world.  Rights of Life, liberty and the pursuit of happiness.   We don't impose our beliefs on others, that goes against the intent of the U.S. Constitution.  That being said, we will not have others impose their beliefs on us, that is tyranny.    Again I ask all those liberal pundits and lawmakers..."are you willing to die to impose your beliefs?"  Well we are willing to fight and if necessary die to protect ours....You decide how you want this to go. 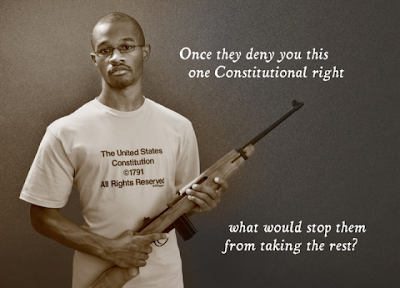 CNSNews.com) - A Democratic state lawmaker in Iowa told an Iowa newspaper he not only wants semi-automatic weapons banned in his state, he would like to see the weapons confiscated from anyone in Iowa who has already bought them.
“We cannot have big guns out here as far as the big guns that are out here, the semi-automatics and all of them,” Rep. Dan Muhlbauer (D-Manilla) told the Carroll (Iowa) Daily Times-Herald. “We can’t have those running around out here. Those are not hunting weapons. We should ban those in Iowa.”
Staff writer Douglas Burns reported that Muhlbauer supports a statewide ban and a voluntary buy-back plan, “but he would go further if needed” -- and that “the state of Iowa should take semi-automatic weapons away from Iowans who have legally purchased them prior to any ban that is enacted if they don’t give their weapons up in a buy-back program.”
“Even if you have them, I think we need to start taking them,” Muhlbauer was quoted as saying. “We can’t have those out there. Because if they’re out there they’re just going to get circulated around to the wrong people. Those guns should not be in the public’s hands. There are just too many guns.”
Presumably, Muhlbauer’s confiscation idea -- if ever adopted --would include the semi-automatic weapon owned by Rep. Steve King (R-Iowa).
During his re-election campaign in 2012, the conservative King disclosed that he owned an AR-15, which he uses to control coyotes on his rural property in Western Iowa.
Muhlbauer’s state legislative district lies within the Fourth Congressional District that Rep. King represents in the U.S. Congress.
Posted by MrGarabaldi at 4:23 PM