I have posted a lot of the B-52 on my blog.  The airplane is legendary.  There are stories of sons flying the same plane their dad did a generation ago.  We in the army loved the B-52 especially as a close support weapon.  When a cell of BUFF's "Big ugly Fat F**kers" drop ordinance on the enemy, it brings the world of pain to our adversary.  I saw the results of the strikes on the republican guard of Saddam Hussein during the first Gulf War, the damage was incredible.  The airplane carries a wide assortment of ordinance from the ever popular dump-truck of iron bombs to the smart bombs, JDAMS, and many other choices depending on the mission requirements.  The B-52 is slated to be in service until 2050, that is a 100 year run for the airframe.  A record that I think is unequalled. 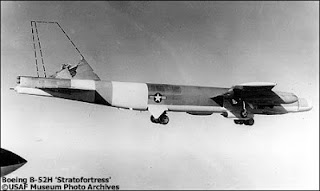 This pic is of another B-52 that lost part of its tail, you can read it Here