I was surfing Wikipedia looking to the origins of webcomics and I followed a few links and there I was........looking at "Murphy's Law"   I had typed in a webcomic that had a military theme "Murphy's law" by Mark Baker, it talked about a soldier's experience in the green machine and I saw a lot of similarities and some of this was very funny.  This is where I got the following comic that I used on an earlier post. 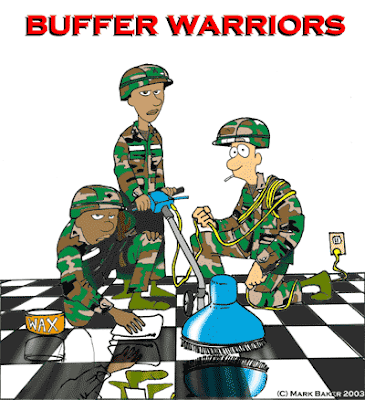 This article is with apologies to Murphy's Law who is a straight up guy with a very good website.  He is "good People"

The following article was excerpted from The Desert Wings
March 3, 1978

Murphy's Law ("If anything can go wrong, it will") was born at Edwards Air Force Base in 1949 at North Base.

It was named after Capt. Edward A. Murphy, an engineer working on Air Force Project MX981, (a project) designed to see how much sudden deceleration a person can stand in a crash.

One day, after finding that a transducer was wired wrong, he cursed the technician responsible and said, "If there is any way to do it wrong, he'll find it."

The contractor's project manager kept a list of "laws" and added this one, which he called Murphy's Law.

Actually, what he did was take an old law that had been around for years in a more basic form and give it a name.

Shortly afterwards, the Air Force doctor (Dr. John Paul Stapp) who rode a sled on the deceleration track to a stop, pulling 40 Gs, gave a press conference. He said that their good safety record on the project was due to a firm belief in Murphy's Law and in the necessity to try and circumvent it. Aerospace manufacturers picked it up and used it widely in their ads during the next few months, and soon it was being quoted in many news and magazine articles. Murphy's Law was born.

The Northrop project manager, George E. Nichols, had a few laws of his own. Nichols' Fourth Law says, "Avoid any action with an unacceptable outcome."

Nichols is still around. At NASA's Jet Propulsion Lab in Pasadena, he's the quality control manager for the Viking project to send an unmanned spacecraft to Mars