I heard this song on my Sirius/XM on the way home this morning from work and this song came on..it was big in 1985 and featured the theme song for the movie featuring the "Brat Pack".  To me the song was meaningful, it was my "senior" year...a year later.  I was fixing to join the service after a year of college.  I didn't party at all my high school senior year, was focused on getting into North Georgia College the Military college in Georgia so I was very restrained.  After a year of college, I was broke and knew that I would have to join the service partially for the G.I Bill and of course old fashioned patriotism.  Remember this was Reagan's America and pride in country was evident.    I was delivering pizza with Domino's pizza and it was a party time, I did do some drinking, the drinking age back then was 18, I never did any "recreational pharmaceuticals" we had a good bunch of people people that worked there and I actually partied a bit.  I for a bit of time didn't focus on the future, just the here and now.   Something that I have never really done before.  I knew that once I was in the service, there was a possibility of my going to war someday and I was OK with that, it is the price we pay as out duty to the republic.  So to me this song reminds me of the only time in my life I lived in the "Here and now". 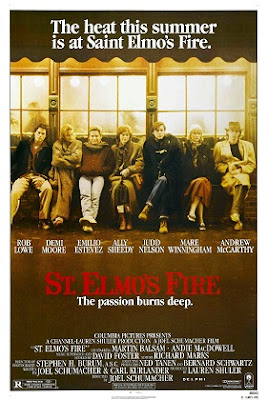 "St. Elmo's Fire (Man in Motion)" is a song recorded by John Parr. It hit number one on the Billboard Hot 100 on September 7, 1985, remaining there for two weeks. It was the main theme for Joel Schumacher's 1985 film St. Elmo's Fire.
The song also peaked at number six in the UK, Parr's home country. and became a number-one hit for John Parr around the world and provided many awards and a Grammy nomination.
The song was originally written by David Foster and John Parr for the Canadian athlete Rick Hansen, who at the time was going around the world in his wheelchair to raise awareness for spinal cord injuries. His journey was called the "Man in Motion Tour."
This song only appeared on Parr's self-titled debut album, released in the UK in 1984 by London Records, and on a very rare 1985 West German CD re-release of the album.
Several members of Toto appear on the record.


The music video features all seven of the main cast of the film St. Elmo's Fire looking sadly through the foggy windows of a run-down and fire-damaged version of the St. Elmo's Bar set. The video was directed by Kort Falkenberg III, who devised the concept with the film's director, Joel Schumacher. The production company only had Parr for a single day before he had to go back to England, so the shoot had to be done in exactly 24 hours.
The Canadian version of the video intersperses images of Rick Hansen's trek with those of the film.
The ending of the video shows Parr singing to each individual cast member from the film before he disappears into the night, and the cast follows him.

I figured I would add some information about the billboard 100.  I use this for my "Monday Music." information.

The limitations of the Hot 100 have become more pronounced over time. Since the Hot 100 was based on singles sales, as singles have themselves become a less common form of song release, the Hot 100's data represented a narrowing segment of sales until the December 1998 change in the ranking formula.
Few music historians believe that the Hot 100 has been a perfectly accurate gauge of the most popular songs for each week or year. For example, during the 1950s and 1960s, payola and other problems skewed the numbers in largely undetectable ways.[8]
Further, the history of popular music shows nearly as many remarkable failures to chart as it does impressive charting histories. Certain artists (such as Pink Floyd and Led Zeppelin) had tremendous album sales while being oblivious to the weekly singles charts. Business changes in the industry also affect artists' statistical "records." Single releases were more frequent and steady, and were expected to have much shorter shelf lives in earlier decades, making direct historical comparisons somewhat specious. Of the 16 singles to top the Billboard chart for more than ten weeks since 1955, only two released before 1992. During the first 40 years of the rock era, no song had ever debuted at number one; since a 1995 change in methodology, 19 songs have.
Strategizing also plays a role. Numerous record labels have taken deliberate steps to maximize their chart positions by such tactics as timing a single's debut to face the weakest possible competition, or massively discounting the price of singles to the point where each individual sale represented a financial loss. Meanwhile, other labels would deliberately withhold even their most marketable songs in order to boost album sales. Particularly in the 1990s, many of the most heavily played MTV and radio hits were unavailable for separate purchase. Because of such countervailing strategies, it cannot be said that a Hot 100 chart necessarily lists the country's 100 most popular or successful songs. Strategies like these were the main reason behind the December 1998 change in the charts.
Some critics have argued that an overemphasis on a limited number of singles has distorted record industry development efforts, and there are nearly as many critics of the Hot 100 as there are supporters. Some of these criticisms, however, are becoming less and less germane as digital downloads have revitalized the concept of “singles sales.”
The Billboard charts have endured as the only widely circulated published report on songs that have been popular across the United States over the last half-century. Competing publications such as Cash Box, Record World, Radio & Records and most recently Mediabase have offered alternate charts, which sometimes differed widely.
Posted by MrGarabaldi at 5:24 PM