I apologize for the lack of stuff that I posted the past 2 weeks, normally I don't let soo much time go between postings,  If I get a lot of "dead" time on the blog, people will think that this blog is no longer active.  If I ever get to that point, I will make the announcement, there will be no "fading away".  I have no plans on hanging up the blog anytime soon. 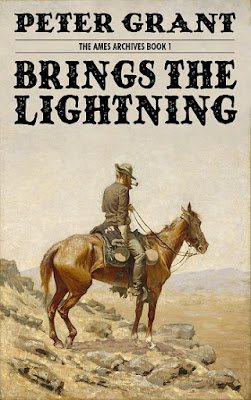 My Blog buddy Peter released his first Western, So far it is a real good read, I miss westerns, I used to read them when I was growing up, one of the things that I liked about them was the "good guys win", and the protagonist was of upstanding character that exemplifies the positive characteristics of a traditional American.  Especially now with all the candyasses running around the universities wanting their "safe place".     I digress, Please check out the book and you will not be disappointed.

We went and saw my brother and Dad in Columbus at the Red Robin (Yum), and it was a good visit 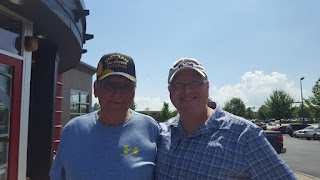 My Dad is retired, but he did 20 years in the Army as a CID Chief Warrant Officer, then ran his own business for about 10 years, then he was a fraud investigator, and then went police and eventually became a Chief then retired.   My Brother was in the Army 29 years retired as a Chief Warrant Officer flying OH-58's and MI-17's helicopters.  Now he is a contractor overseas.  My family is strong with Military service, and that is a good thing, it makes us appreciate being a citizen of the republic. I heard this song playing and I pulled my "Shazam" app and recorded this song.  I kept hearing it but I never knew who sang it and the name.  Well I found out,    it was the Alan Parsons project. I have had another of their songs on my "Monday Music".  The song was "Don't answer me."   But this song "Sirius" was popular in sporting events and other venue's.


The album contains the instrumental piece "Sirius", which has become a staple of many big-time college and professional sporting arenas throughout North America. It is best known for its use by the Chicago Bulls to introduce its starting line-up (including Michael Jordan) during its championship years of the 1990s and continued to the present. It was even the opening number of the documentary Michael Jordan to the Max. It is also used as the soundtrack for the Nebraska Cornhuskers football team tunnel walk before every home game. It was also used by the New Orleans Saints as their entrance music for Super Bowl XLIV. The Kansas City Chiefs also used it during kickoffs during the Marty Schottenheimer era.
During the mid-1980s, it was also used as the ring entrance theme for Ricky "The Dragon" Steamboat by the World Wrestling Federation. However, to avoid paying royalties, WWE has edited out Steamboat's entrances with the track or overdubbed them with a homegrown theme from his 1991 run in the WWF.
France's tennis team used the song as their entrance theme for the 2014 Davis Cup final against Switzerland.
"Sirius" is played during the climactic scene of the Godfrey Ho film "American Commando 3: Savage Temptation".
"Sirius" is played in the 8th-season episode of Frasier, Hooping Cranes, during a sequence where Niles Crane shoots and scores from half-way on a basketball court in KeyArena.
"Sirius" segues into "Eye in the Sky". The former is always followed by the latter on airplay, though not always in live performances – at the World Liberty Concert "Sirius" was played as the introduction to "Breakaway" (Try Anything Once) with Candy Dulfer on saxophone.
In recent years, the song has been used on the trailer for Anchorman 2: The Legend Continues, at Euro 2012, features on the soundtracks to NBA 2K11 and Cloudy with a Chance of Meatballs, as well as a Nissan Altima TV advertisement.
Posted by MrGarabaldi at 10:54 AM