I returned from camping, and it had its good points and bad points, I will expound on tomorrow perhaps.  I was driving to work and this song came on the XM radio that my Milan has, and I remembered this song and the babes:)   What Can I say...When you are 16 years old and really notice girls....This song was popular in my school, between the music, the 1933 Ford and the babes, it is a really good song. I also remembered the video getting a lot of airplay on MTV, this was the start of the Music video's telling a story and that also was neat. 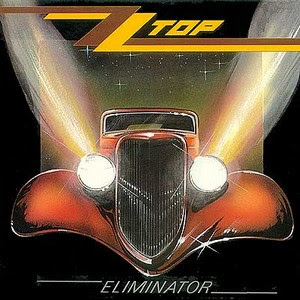 "Legs" is a song performed by the band ZZ Top from their 1983 album Eliminator. The song was released as a single in 1984 and reached number eight on the Billboard Hot 100 in the United States. The dance mix version of the song peaked at number thirteen on the dance charts. Although all three members of ZZ Top are credited with playing on the track, only Gibbons was actually present; engineer Terry Manning was responsible for all the musical parts save the lead guitar. However, David Blayney (ZZ Top stage manager for 15 years) explains in his book Sharp Dressed Men that the pumping synthesizer effect in "Legs" was introduced in pre-production by Linden Hudson. During the final tracking sessions, Terry Manning (final Eliminator tracking engineer) called Linden Hudson and asked how he did the synth effects for "Legs", although Terry could have easily pulled it off if he needed to. The single remix of “Legs" is much more synthesizer-driven than the album version. Although you can hear a synthesizer throughout the album version, it is toned down. There is also a three-note guitar riff heard throughout most of the album version of "Legs", and it is a minute longer than the single version.

The "Legs" video was the third and last of the Eliminator series of videos that introduced the now-iconic 1933 Ford, "Eliminator girls", and ZZ Top-as-benevolent-spirits tropes, all of which have become firmly established aspects of the band's iconography. "Legs" was important in this regard as it diversified the subject of transformation from man ("Gimme All Your Lovin'" and "Sharp Dressed Man") to woman.
After stepping in a mud puddle and bumping into tough-looking but polite bikers at a crosswalk, a pretty salesgirl (Wendy Frazier) enters a burger joint. She places a take-out order but suffers harassment by everyone there except a handsome young cook (David Wakefield) who is also bullied by his co-workers. The salesgirl takes her order, escapes the place and her tormentors, but in her haste leaves her glasses and a food container. The cook retrieves the items and runs after her to the shoe store where she works.
At the shoe store, the store owner and the senior salesman both shove the salesgirl around, while a customer laughs raucously at her misfortune. The cook dashes into the shop and then to the stock room to return the girl's items. She thanks him shyly, but the owner and the salesman burst in, and heave the cook out of the store. The Eliminator pulls up, and the Eliminator girls (Jeana Tomasino, Kymberly Herrin, and Danièle Arnaud) emerge from the car. They help the cook to his feet, dust him off, then slip into the shoe store through the back door. The Eliminator girls find the dejected salesgirl, put her abusers in their place, then present the salesgirl to the ZZ Top band members, who have suddenly appeared to bestow upon her the keys to the Eliminator.
The salesgirl is whisked away for a complete makeover: new hairstyle, makeup, and sexy new wardrobe, including pink stockings and garters, a matching short skirt, lace-trimmed ankle socks and spike heels from her now-doting boss. The Eliminator arrives at the burger joint, where the salesgirl debuts her confident new self. She strides into the restaurant with the Eliminator girls behind her. With the help of the friendly bikers, the salesgirl gets her man as the Eliminator girls keep the more aggressive men at bay. The happy pair leaves the restaurant hand in hand and ride away in a dune buggy, while the burger joint's female owner and the rowdy customers watch them leave, sullen and angry over being put in their place. The Eliminator girls invite some of the friendly bikers to join them and the Eliminator drives away as the ZZ Top band members appear one last time to wave at the camera.
This was the third music video directed by Tim Newman.
The spinning, furry Dean guitars also premiered in this video.

Posted by MrGarabaldi at 7:16 AM