This has been an adventuresome weekend for me, I and another scout leader went to Alabama near Anniston to attend a "NLAT" course or "National Lodge Adviser Training".    we had 3 kids with us attending NLS or "National Leadership Training".   We got there and checked in, we stayed in a Baptist conference center, it looked like a hotel complex, wasn't bad. Our classes started at 8:30 and at 9:00 I was in the way to the  emergency room suffering from nausea and dizziness.  Nothing like spending Friday night in a hospital.  Everything came back good but it really started my weekend off right.  I believe it was dehydration and exhaustion, but I have followups with my Dr.  Anyway enough about my weekend.

The first time I heard of "Vanilla Ice" was in 1990 and we had gotten a group of new soldiers and they were talking about this thing called "rap" and vanilla ice was their spokesman for lack of a better word, Remember by this time I was 25 years old, been in the green machine 6 years and didn't have the same interest as the younger soldiers.  That was the first time I really experienced "The generation gap".  Seeing a couple of Italian kids trying to rap was hilarious.  I listened to the song..."like I had a choice", it was everywhere!!!.  I did notice that the AFN station would start it off with "under Pressure" by queen then follow it with vanilla Ice or they would reverse it.  It made for an interesting combination.  I have gotten used to the song, it don't grate on me like it used to.  I do know that Vanilla Ice had a hard time with "Street Creed" in the rapper scene.  Being a white guy in basically a black music world was hard and he didn't get the respect he should have gotten.  The later rapper Emimen in my mind had it a bit easier because Vanilla Ice was there before but in a way Eminem had it harder because of the controversy surrounding Vanilla Ice.  Eminem really had "street Creed" in spades, where Vanilla was accused of manufacturing his.  After Vanilla faded out of the mainstream music stream he had to reinvent himself to get away from the image.  From what I have seen he has done a good job, he has a dedicated base to his music and he is "keeping it real".

"Ice Ice Baby" is a hip hop song written by American rapper Vanilla Ice and DJ Earthquake based on the bassline of "Under Pressure" by Queen and David Bowie, who did not initially receive songwriting credit or royalties until after it had become a hit. Originally released on Vanilla Ice's 1989 debut album Hooked and later on his 1990 national debut To the Extreme, it is his most well known song. It has appeared in remixed form on Platinum Underground and Vanilla Ice Is Back! A live version appears on the album Extremely Live, while a rap rock version appears on the album Hard to Swallow, under the title "Too Cold".
"Ice Ice Baby" was initially released as the B-side to Vanilla Ice's cover of "Play That Funky Music", but the single was not initially successful. When disc jockey David Morales played "Ice Ice Baby" instead, it began to gain success. "Ice Ice Baby" was the first hip hop single to top the Billboard Hot 100. Outside the United States, the song topped the charts in Australia, Belgium, the Netherlands, New Zealand, the Republic of Ireland and the United Kingdom, thus helping the song diversify hip hop by introducing it to a mainstream audience. The song came fifth in VH1 and Blender's 2004 list of the "50 Most Awesomely Bad Songs Ever." 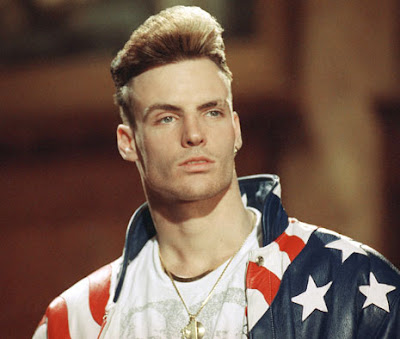 Robert Van Winkle, better known by his stage name Vanilla Ice, wrote "Ice Ice Baby" in 1983 at the age of 16, basing its lyrics upon his experiences in South Florida. The lyrics describe a shooting and Van Winkle's rhyming skills. The chorus of "Ice Ice Baby" originates from the signature chant of the national African American fraternity Alpha Phi Alpha. Of the song's lyrics, Van Winkle states that "If you released 'Ice Ice Baby' today, it would fit in today's lyrical respect among peers, you know what I'm sayin'? [...] My lyrics aren't, 'Pump it up, go! Go!' At least I'm sayin' somethin'."
The song's hook samples the bassline of the 1981 song "Under Pressure" by Queen and David Bowie who did not receive credit or royalties for the sample. In a 1990 interview, Van Winkle said the two melodies were slightly different because he had added an additional note, an anacrusis ("pickup") between odd-numbered and subsequent even-numbered iterations of the Under Pressure sample.   In later interviews, Van Winkle readily admitted he sampled the song and claimed his 1990 statement was a joke; others, however, suggested he had been serious. Van Winkle later paid Queen and Bowie and as a result, Bowie and all members of Queen have since been given songwriting credit for the sample. In December 1990, Van Winkle told British youth music magazine Smash Hits where he came up with the idea of sampling "Under Pressure":
Van Winkle described himself as the first rapper to cross into the pop market and said that although his pioneer status forced him to "take the heat for a lot of people" for his music's use of samples, the criticism he received over sample use allowed sampling to become acceptable in mainstream hip hop.