The Victor class is the type of submarine that was comparable to the fast attack boats that NATO used to go after the REDFLEET SSBN,  The Victor class submarines were considered to be their "varsity" and the behavior and tactics reflect this. According to the book, the American Mark 46 torpedo, the one used by the Submarines and P3 Orion, the warhead was small and the only way to "get a kill" on a submarine was to get a "propeller shot" bust the seals and flood the engine room.  The Soviet subs used a double hull design( like all subs) that made a hull shot iffy for a kill.  I don't know if it is true, I am going by what the book said.


The Victor class is the NATO reporting name for a type of nuclear-powered submarine that was originally put into service by the Soviet Union around 1967. In the USSR, they were produced as Project 671 (Russian: Проект 671). Victor-class subs featured a teardrop shape, which allowed them to travel at high speed. These vessels were primarily designed to protect Soviet surface fleets and to attack American ballistic missile submarines. Project 671 begun in 1959 and design task was assigned to SKB-143, one of the two predecessors (the other being OKB-16) of the famous Malachite Central Design Bureau, which would eventually become one of the three Soviet/Russian submarine design centers, along with Rubin Design Bureau and Lazurit Central Design Bureau 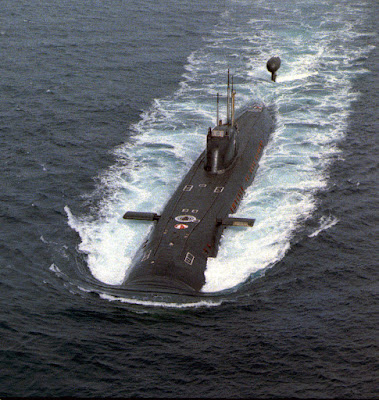 Victor III - Soviet design designation Project 671RTM Shchuka (Pike) - entered service in 1979; 25 were produced until 1991. Quieter than previous Soviet submarines, these ships had 4 tubes for launching SS-N-21 or SS-N-15 missiles and Type 53 torpedoes, plus another 2 tubes for launching SS-N-16 missiles and Type 65 torpedoes. 24 tube-launched weapons or 36 mines could be on board. The Victor-III caused a minor furore in NATO intelligence agencies at its introduction because of the distinctive pod on the vertical stern-plane. Speculation immediately mounted that the pod was the housing for some sort of exotic silent propulsion system, possibly a magnetohydrodynamic drive unit. Another theory proposed that it was some sort of weapon system. In the end, the Victor-III's pod was identified as a hydrodynamic housing for a reelable towed passive sonar array; the system was subsequently incorporated into the Sierra class and Akula-class submarine SSNs. The Victor III class was continuously improved during construction and late production models have a superior acoustic performance. They were 106m long. 21 exposed. 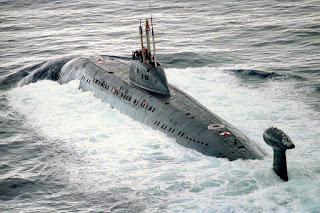 The Foxtrot class was the NATO reporting name of a class of diesel-electric patrol submarines that were built in the Soviet Union. The Soviet designation of this class was Project 641. 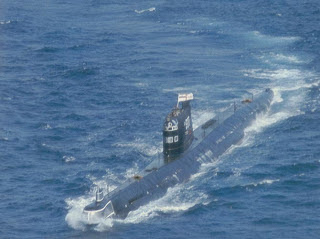 The Foxtrot class was designed to replace the earlier Zulu class, which suffered from structural weaknesses and harmonic vibration problems that limited its operational depth and submerged speed. The first Foxtrot keel was laid down in 1957 and commissioned in 1958 and the last was completed in 1983. A total of 58 were built for the Soviet Navy at the Sudomekh division of the Admiralty Shipyard (now Admiralty Wharves), St. Petersburg. Additional hulls were built for other countries.
The Foxtrot class was comparable in performance and armament to most contemporary designs. However, its three screws made it noisier than most Western designs. Moreover, the Foxtrot class was one of the last designs introduced before the adoption of the teardrop hull, which offered much better underwater performance. Also, although the Foxtrot was larger than a Zulu Class Submarine, the Foxtrot Class had 2 of its 3 decks dedicated to batteries. This gave it an underwater endurance of 10 days, but the weight of the batteries made the Foxtrot's average speed a slow 2 knots at its maximum submerged time capability. Due to the batteries taking up 2 decks, onboard conditions were crowded with space being relatively small even when compared to older submarines such as the much older American Balao-class submarine. The Foxtrot class was completely obsolete by the time the last submarine was launched. The Russian Navy retired its last Foxtrots between 1995 and 2000, units were scrapped and disposed of for museum purposes. The last known operational unit, Zaporizhzhia, served in the Ukrainian Naval Forces until it was surrendered to / captured by Russia on March 22, 2014, as part of the Russian annexation of Crimea. Russia decided not to accept it due to its age and operational unsuitability. Its subsequent status was unknown. 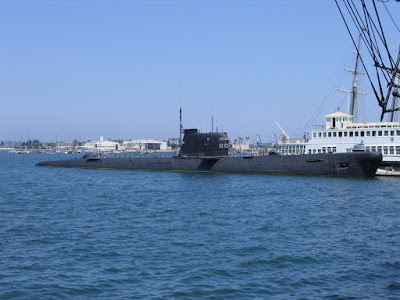 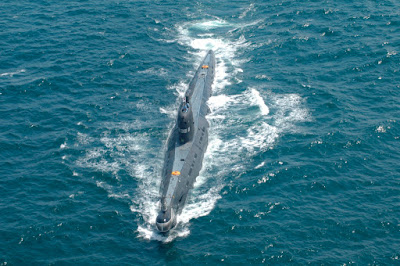