I am continuing my series on the equipment used in Tom Clancy's Red Storm Rising.  I am focusing on the Submarine that featured prominently in the book from the initial mission to the Berent sea where the Soviet Navy to the attack on the Soviet fleet as they were sortied to Norway and finally firing the tomahawks that decimated the Soviet Frontal aviation Backfires that were putting a hurt on the convoys and the escort ships. 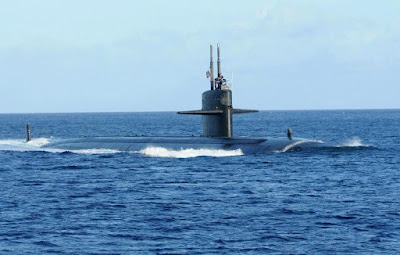 The Los Angeles class (also known as the 688 class) is a class of nuclear-powered fast attack submarines (SSN) in service with the United States Navy. They represent two generations and close to half a century of the U.S. Navy's attack submarine fleet. As of 2016, 36 of the class are still in commission and 26 retired from service. Of the 26 retired boats, 14 of them were laid up half way (approximately 17–18 years) through their projected lifespans due to their midlife reactor refuelings being cancelled. A further four boats were proposed by the Navy, but later cancelled. The class has more operating nuclear submarines than any other in the world. All submarines of this class are named after American towns and cities (e.g., Key West, Florida, and Greeneville, Tennessee), the exception being USS Hyman G. Rickover (SSN-709). This system of naming broke a long-standing tradition in the U.S. Navy of naming attack submarines for creatures of the ocean (e.g., USS Nautilus (SSN-571)).
In 1982 after building 31 boats, the class underwent a minor redesign, the following 8 that made up the second "flight" of subs had 12 new vertical launch tubes that could fire Tomahawk missiles. The last 23 saw a significant upgrade with the 688i improvement program. These boats are quieter, with more advanced electronics, sensors, and noise reduction technology. Externally they can be recognized quickly as the retractable diving planes are placed at the bow rather than on the sail.

USS Chicago (SSN-721) is a Los Angeles-class submarine, the fourth ship of the United States Navy to be named for the city of Chicago, Illinois. The contract to build her was awarded to Newport News Shipbuilding and Dry Dock Company in Newport News, Virginia on 13 August 1981 and her keel was laid down on 5 January 1983. She was launched on 13 October 1984 sponsored by Mrs. Vicki Ann Paisley, wife of Melvyn R. Paisley assistant Secretary of the Navy, and commissioned on 27 September 1986, with Commander Robert Avery in command.

This plane also figured prominently in the hunt for the REDFLEET SSN that were trying to close the Atlantic against the convoys that were pushing their way through murderous losses from Backfire and Soviet Submarines.  From firing the harpoon against the Soviet ship landing troops on Iceland to trying to close the subsequent GIUK Gap after Iceland was captured by the Soviets early in the war that was a brilliant masterstroke that threw out 40 years of doctrine off the bat and the Allies having to scramble to rebuild the line to keep the Soviet subs out of the Atlantic.  My Blog buddy "Old NFO" knows more about these airplanes than the builders.

In August 1957, the U.S. Navy called for replacement proposals for the piston engined Lockheed P2V Neptune (later redesignated P-2) and Martin P5M Marlin (later redesignated P-5) with a more advanced aircraft to conduct maritime patrol and anti-submarine warfare. Modifying an existing aircraft was expected to save on cost and allow rapid introduction into the fleet. Lockheed suggested a military version of their L-188 Electra, which was still in development and had yet to fly. In April 1958, Lockheed won the competition and was awarded an initial research and development contract in May.

The prototype YP3V-1/YP-3A, Bureau Number (BuNo) 148276 was modified from the third Electra airframe c/n 1003. The first flight of the aircraft's aerodynamic prototype, originally designated YP3V-1, was on 19 August 1958. While based on the same design philosophy as the Lockheed L-188 Electra, the aircraft was structurally different. The aircraft had 7 feet (2.1 m) less fuselage forward of the wings with an opening bomb bay, and a more pointed nose radome, distinctive tail "stinger" for detection of submarines by magnetic anomaly detector, wing hardpoints, and other internal, external, and airframe production technique enhancements. The Orion has four Allison T56 turboprops which give it a top speed of 411 knots (761 km/h; 473 mph) comparable to the fastest propeller fighters, or even slow high-bypass turbofan jets such as the Fairchild Republic A-10 Thunderbolt II or the Lockheed S-3 Viking. Similar patrol aircraft include the Soviet Ilyushin Il-38, the French Breguet Atlantique and the British jet-powered Hawker Siddeley Nimrod based on the de Havilland Comet.
The first production version, designated P3V-1, was launched on 15 April 1961. Initial squadron deliveries to Patrol Squadron Eight (VP-8) and Patrol Squadron Forty Four (VP-44) at Naval Air Station Patuxent River, Maryland began in August 1962. On 18 September 1962, the U.S. military transitioned to a unified designation system for all services, with the aircraft being renamed the P-3 Orion. Paint schemes have changed from early 1960s gloss blue and white, to mid-1960s gloss white and gray, to mid-1990s flat finish low visibility gray with fewer and smaller markings. In the early 2000s, the scheme changed to a gloss gray finish with the original full-size color markings. Large size Bureau Numbers on the vertical stabilizer and squadron designations on the fuselage remained omitted

The P-3 has an internal bomb bay under the front fuselage which can house conventional Mark 50 torpedoes or Mark 46 torpedoes and/or special (nuclear) weapons. Additional underwing stations, or pylons, can carry other armament configurations including the AGM-84 Harpoon, AGM-84E SLAM, AGM-84H/K SLAM-ER, the AGM-65 Maverick, 127 millimetres (5.0 in) Zuni rockets, and various other sea mines, missiles, and gravity bombs. The aircraft also had the capability to carry the AGM-12 Bullpup guided missile until that weapon was withdrawn from U.S./NATO/Allied service.
The P-3 is equipped with a magnetic anomaly detector (MAD) in the extended tail. This instrument is able to detect the magnetic anomaly of a submarine in the Earth's magnetic field. The limited range of this instrument requires the aircraft to be near the submarine at low altitude. Because of this, it is primarily used for pinpointing the location of a submarine immediately prior to a torpedo or depth bomb attack. Due to the sensitivity of the detector, electromagnetic noise can interfere with it, so the detector is placed in P-3's fiberglass tail stinger (MAD boom), far from other electronics and ferrous metals on the aircraft. 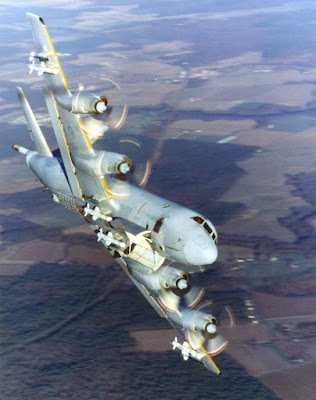 Developed during the Cold War, the P-3's primary mission was to track Soviet Navy ballistic missile and fast attack submarines and to eliminate them in the event of full-scale war. At its height, the U.S. Navy's P-3 community consisted of twenty-four active duty "Fleet" patrol squadrons home based at air stations in the states of Florida and Hawaii as well as bases which formerly had P-3 operations in Maryland, Maine, and California. There were also thirteen Naval Reserve patrol squadrons identical to their active duty "Fleet" counterparts, said Reserve "Fleet" squadrons being based in Florida, Pennsylvania, Maryland, Michigan, Massachusetts (later relocated to Maine), Illinois, Tennessee, Louisiana, California and Washington. Two Fleet Replacement Squadrons (FRS), also called "RAG" squadrons (from the historic "Replacement Air Group" nomenclature) were located in California and Florida. The since-deactivated VP-31 in California provided P-3 training for the Pacific Fleet, while VP-30 in Florida performed the task for the Atlantic Fleet. These squadrons were also augmented by a test and evaluation squadron in Maryland, two additional test and evaluation units that were part of an air development center in Pennsylvania and a test center in California, an oceanographic development squadron in Maryland, and two active duty "special projects" units in Texas and Hawaii, the latter being slightly smaller than a typical squadron. 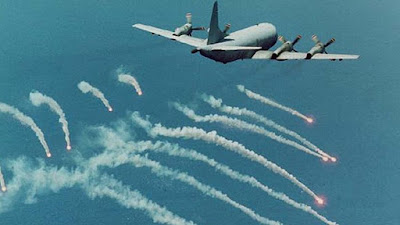 Reconnaissance missions in international waters led to occasions where Soviet fighters would "bump" a P-3, either operated by the U.S. Navy or other operators such as the Royal Norwegian Air Force. On 1 April 2001, a midair collision between a United States Navy EP-3E ARIES II signals surveillance aircraft and a People's Liberation Army Navy J-8II jet fighter-interceptor resulted in an international dispute between the U.S. and the People's Republic of China (PRC).[15]
More than 40 combatant and noncombatant P-3 variants have demonstrated the rugged reliability displayed by the platform flying 12-hour plus missions 200 ft (61 m) over salt water while maintaining an excellent safety record. Versions have been developed for the National Oceanic and Atmospheric Administration (NOAA) for research and hurricane hunting/hurricane wall busting, for the U.S. Customs Service (now U.S. Customs and Border Protection) for drug interdiction and aerial surveillance mission with a rotodome adapted from the Grumman E-2 Hawkeye or an AN/APG-66 radar adapted from the General Dynamics F-16 Fighting Falcon, and for NASA for research and development. 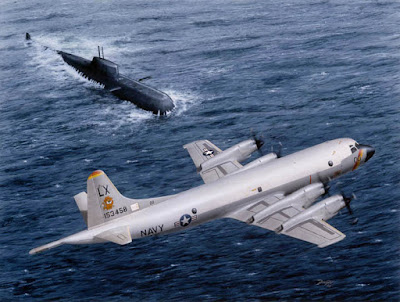 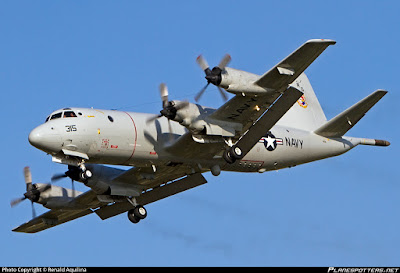 In January 2011, the U.S. Navy revealed that P-3s have been used to hunt down "third generation" narco subs.This is significant because as recently as July 2009, fully submersible submarines have been used in smuggling operations. 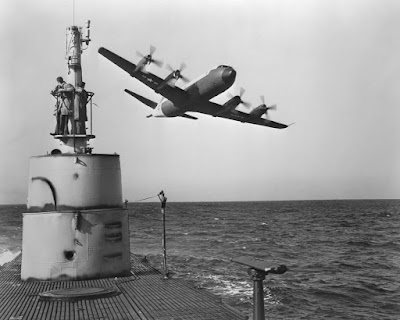 On 2 August 1990, Iraq invaded Kuwait and was poised to strike Saudi Arabia. Within 48 hours of the initial invasion, U.S. Navy P-3C aircraft were among the first American forces to arrive in the area. One was a modified platform with a prototype system known as "Outlaw Hunter". Undergoing trials in the Pacific after being developed by the Navy’s Space & Naval Warfare Systems Command (SPAWAR), "Outlaw Hunter" was testing a specialized over-the-horizon targeting (OTH-T) system package when it responded. Within hours of the start of the coalition air campaign, "Outlaw Hunter" detected a large number of Iraqi patrol boats and naval vessels attempting to move from Basra and Umm Qasr to Iranian waters. "Outlaw Hunter" vectored in strike elements which attacked the flotilla near Bubiyan Island destroying 11 vessels and damaging scores more. During Desert Shield, a P-3 using infrared imaging detected a ship with Iraqi markings beneath freshly-painted bogus Egyptian markings trying to avoid detection. Several days before the 7 January 1991 commencement of Operation Desert Storm, a P-3C equipped with an APS-137 Inverse Synthetic Aperture Radar (ISAR) conducted coastal surveillance along Iraq and Kuwait to provide pre-strike reconnaissance on enemy military installations. A total of 55 of the 108 Iraqi vessels destroyed during the conflict were targeted by P-3C aircraft.
The P-3 Orion's mission expanded in the late 1990s and early 2000s to include battlespace surveillance both at sea and over land. The long range and long loiter time of the P-3 Orion have proved to be an invaluable asset during Operation Iraqi Freedom and Operation Enduring Freedom. It can instantaneously provide information about the battlespace it can see to ground troops, particularly the U.S. Marines.