The SURTASS Ships and a Tango (Red Storm Rising)

This is the latest installment of my "Red Storm Rising" posts.  In this segment I will be mentioning the SURTASS ships and one of the Submarines used by the Soviet Navy.  First off in the book, it was talked about the USNS Prevail, she was built along the lines of a tuna boat, but instead of a net for fish, the Prevail and her sisters hunted submarines, they would string behind them about 6000 ft of line and this would be her "tail", and the tail would detect submarines very far away when she would then notify Norfolk where the submarines were.  The Soviets knew about these boats,l but every time they approached one of these ships, they were vigorously prosecuted by an Orion.  Her crew were half civilian employed by the NSA and the other half were manned by the NAVY.   The only weapon on her was an M-14 against sharks.  She and her sisters were considered the most dangerous ASW platform that the United States had against the Soviet Submarines.  They would make tracks across the atlantic and detect all underwater emissions, from signals from U.S. Submarines to the propeller noises from Soviet Submarines, all submarines had a different "cavitation" noise based on powerplant type, propeller type and all submarines had their "quirks" that made Identifying them easier. 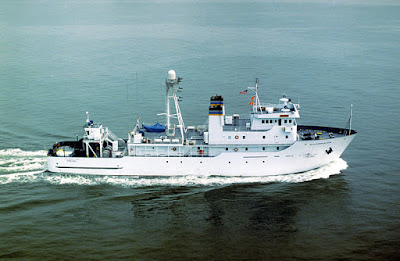 SURTASS began as development program in 1973 using the new research vessel Moana Wave. In 1980 SURTASS passed OPEVAL. The new Stalwart-class ocean surveillance ships had the first contract awarded on 26 September 1980 and were similar to the prototype ship, the Moana Wave. Initially the SURTASS system were passive, receive only sonar systems. The array was towed miles behind the ships and were designed for long range detection of submarines.
As the passive systems were being deployed, an active adjunct known as the SURTASS Low Frequency Active (LFA) systems was designed for long range detection. The active system must be used in conjunction with the passive received system. The active component transmits an audio signal between 100 Hz and 500 Hz from an array suspended below the ship while the passive SURTASS array is towed miles behind to receive the signal after it had reflected off the submarine. The active LFA system is an updated version of the fixed low frequency surveillance system known as Project Artemis. 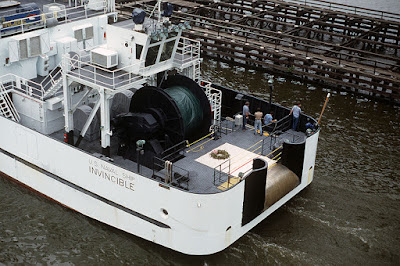 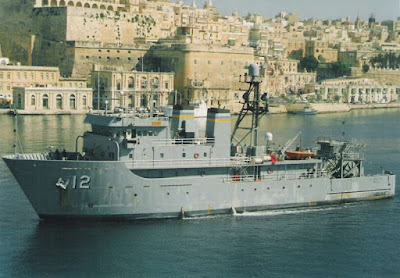 SURTASS LFA is a long-range, all-weather, sonar system with both passive and active components, operating in the low frequency (LF) band (100–500 hertz [Hz]). USNS Impeccable has the original LFA system, weighing 155 tonnes; the 64-tonne Compact LFA derivative was developed for the smaller Victorious class. CLFA was installed on Able in 2008, on Effective in 2011 and Victorious in 2012; no further installations are planned.
The active system component, LFA, is an adjunct to the passive detection system, SURTASS, and is planned for use when passive system performance proves inadequate. LFA is a set of acoustic transmitting source elements suspended by cable from underneath a ship. These elements, called projectors, are devices that produce the active sound pulse, or ping. The projectors transform electrical energy to mechanical energy that set up vibrations or pressure disturbances within the water to produce a ping.
The characteristics and operating features of LFA are:
The passive, or listening, part of the system is SURTASS, which detects returning echoes from submerged objects, such as submarines, through the use of hydrophones. These devices transform mechanical energy (received acoustic sound wave) to an electrical signal that can be analyzed by the signal processing system of the sonar. The SURTASS hydrophones are mounted on a horizontal receive array that is towed behind the vessel. The array length is 1,500 m (4,900 ft) with an operational depth of 150 to 460 m (500 to 1,500 ft). The SURTASS LFA ship must maintain a minimum speed of approximately 6 kilometers per hour (3.2 knots) through the water in order to tow the hydrophone array in the horizontal plane. The return signals or echoes, which are usually below background or ambient noise level, are then processed and evaluated to identify and classify potential underwater targets. 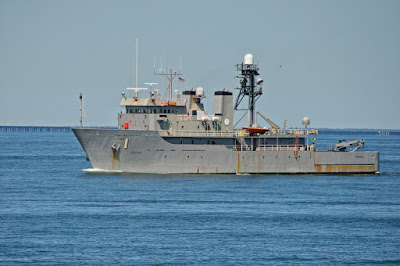 T-AGOS ships are operated by the Military Sealift Command and are under the administrative command of Commander, Undersea Surveillance. They are deployed under the Operational Control (OPCON) of the Theater ASW Commanders, CTF 84 and CTF 12. Civilian technicians who operate and maintain the mission equipment man the SURTASS Operations Center (SOC), the nerve center of the ship. When operating with tactical forces, military detachments are embarked for on-board analysis and direct reporting to fleet units. A SURTASS mission consists of 60 days on station while towing an array of hydrophones that collect acoustic data. 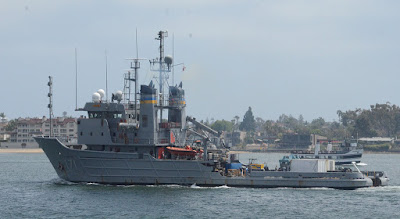 The ships are homeported at Little Creek and Saint Helena's Annex, Virginia; Anacortes, Washington; and Port Hueneme, California. When operating independently as in a deep ocean surveillance mission, acoustic data is transmitted to shore via satellite for analysis and reporting. SURTASS ships have proudly operated throughout the world supporting the Undersea Warfare/Anti-Submarine-Warfare mission of all five numbered fleets of the U.S. Navy.
The ship is designed to tow an array of underwater listening devices to collect acoustical data. The ship also carries electronic equipment to process and transmit that data via satellite to shore stations for evaluation. The ship, the listening devices and electronic equipment are all part of a system called the Surveillance Towed Array System, or SURTASS. SURTASS is a linear array of 8575 ft deployed on a 6000 ft tow cable and neutrally buoyant. The array can operate at depths between 500 and 1500 ft. Information from the array is relayed via WSC-6 (SHF) SATCOM link to shore. SURTASS patrols are of 60-90 days duration [which even with passive tank stabilization is a long time to wallow around at 3 kts]. 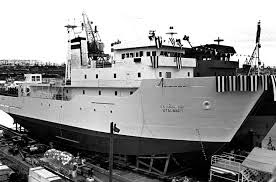 The Monohull T-AGOS design, is based on the T-ATF Fleet Tug hull configuration. Various design features are incorporated to satisfy the SURTASS operating requirements and mission profile. The design is based on a mission duration of up to 90 days of towing operation at 3 knots, with a maximum sustained speed in transit of 11 knots. The ship's complement of 30 includes the SURTASS technical personnel, known as the (shipboard Operation and Maintenance (O&M) crew). In mission operations a total of 24 shipboard personnel, 18 ship's crew and 5 SURTASS O&M crew, is typical.
This program was completed after several rocky years stemming from the financial difficulties of Tacoma Boatbuilding Co. which built the first eight ships but initially was unable to complete T-AGOS 9-12 before filing for bankruptcy. Halter Marine built T-AGOS 13-18. The STALWART class T-AGOS vessels, T-AGOS 1 through T-AGOS 18, were originally ad-measured as less than 1600 gross tons and later re-admeasured as over 1600 gross tons. 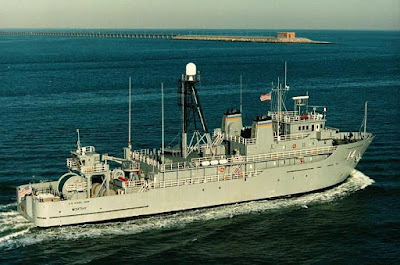 The USNS BOLD (T-AGOS 12), the 12th ship of the Stalwart class, completed the 500th SURTASS mission, and a ceremony commemorating the milestone mission was conducted at U. S. Naval Station; Rota, Spain July 12, 2000 as BOLD made a portcall there following her historic patrol. Five hundred missions equate to over four million nautical miles of at-sea surveillance operations. Notable events included exchange of photo taking and greetings with helicopters, fixed wing aircraft and intelligence gathering vessels of the Soviet Union, at sea Medical Evacuations (MEDEVACS) for seriously ill or injured SURTASS ship crew members, sharks attacking the acoustic array, various periscope sightings, and iceberg evasion. Based on the number of BZ (Navy abbreviation for Well Done) messages received over the years, T-AGOS ships have time and time again proven their value both as strategic and tactical assets.

The SURTASS/Twin-Line Array Engineering Development Model was installed on the USNS Assertive (T-AGOS-9), and the first production model was installed on the USNS Bold (T- AGOS-12). Funding for six additional twin-line arrays was provided in the FY 2000 FYDP.
The Space and Naval Warfare Systems Command (SPAWAR), San Diego, manages the SURTASS program and contracts with the Raytheon Compny to operate and maintain the SURTASS equipment on T-AGOS ships. By early 1999 SPAWAR was inserting the second generation of commercial-off-the-shelf (COTS) equipment into the SURTASS baseline. USNS BOLD became the first T-AGOS ship to complete this upgrade, which added a Twin-Line towed array, a surface ship tracking capability, and included a COTS processing refresh and communications upgrade. The upgrades will significantly enhance the ships and SURTASS anti-submarine warfare capabilities in the high surface clutter environments of shallow water operations.
When deployed with a military detachment that augments its predominantly civilian crew for on-board analysis and direct contact reporting, the ships provide the fleet with a highly effective ocean surveillance capability that supports both deep ocean and shallow water warfare missions.

In the Book, the submarines that were called "Tango's, they were difficult to detect, you needed a good team from the ship and the helicopter to get them.  The Tango's were mentioned almost as much as the Victor class submarines.

The Tango class was the NATO reporting name of a class of diesel-electric submarines that were built in the Soviet Union to replace the Foxtrot-class submarines assigned to the Black Sea and Northern Fleets. The Soviet designation of this class was Project 641B and it was also known as the Som (Catfish) class. The first of the class was completed in 1972 at Gorky. A total of 18 were built in two slightly different versions. The later type was several meters longer than the first, possibly because of the installation of ASW missile equipment.
The bow sonar installations appear to be similar to those fitted to Soviet nuclear attack submarines. The propulsion plant was the same as the last subgroup of the Foxtrot class. The Tango class had far more battery capacity, far higher than any previous conventional submarine class in the Soviet Navy; as a result, pressure hull volume increased. This allowed an underwater endurance in excess of a week before snorkeling was required. 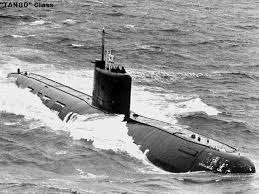 Coupled with new armament and sensor fit, the Tango class were ideal for ambush operations against Western nuclear submarines at natural chokepoints.
Because of its all-hull rubber coating, the sub class was nicknamed "rezinka" [rubber]
Construction of this class has now stopped. One unit remains in the Black Sea Fleet but it may have been decommissioned since 2010. 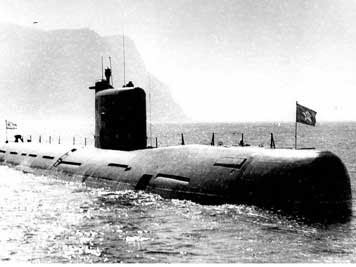 Posted by MrGarabaldi at 6:38 AM