I attended a seminar hosted by our local sheriff that was geared toward local houses of worship.  he explained the breakdown of incidences by religion, Whooda thunk that the Baptist had the highest incidence of church violence at 26%, but that also can be that Baptist are a larger religious groups here in the United States.  I am a trustee at the Church I attend, several members of the Trustee's went to the meeting to get clarification on what we can do after the well publicized church shootings. 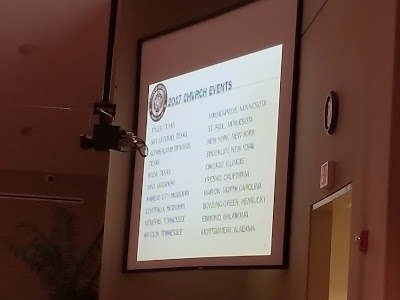 The Auditorium was packed standing room only with 400 people there, I was lucky to get a corner seat.

This is a list of Church shootings, some of them I knew about..Some I didn't.  Apparently there was another one the same time as the Southerland Spring and nobody knew about it because the Southerland Spring had soaked up all the media coverage.
The Sheriff did explain the new law that was enacted in 2014, and this law was clear like mud, you either opt on with no restrictions or opt out with a "gun Free Zone", there are no gray areas.  Let me explain what the law means...

I got a synopsis of the law right here...

The Safe Carry Protection Act, the new gun law, went into effect July 1, 2014. Governor Nathan Deal signed a bill that changed where a person with a gun permit can carry a concealed weapon. Georgia law contains two areas regarding concealed weapons.  The first change was at a public gathering. A public gathering is described as any sporting event, churches or church functions, political rallies, any government building and bars. Customers can now bring guns into bars if the owner specifically allows it. Under the old Georgia law, carrying a gun at any public location was a misdemeanor. The second area under current Georgia law is schools. It is against the law to carry any weapon within 1,000 feet of property owned by a public or private school. Violation of this law is a felony. This law is being reviewed in regard to employees of the school, however, if a teacher chooses to carry a weapon, special training will be required. The law Governor Deal signed included several provisions that will relax the restrictions on where a gun may be carried.
Sections of the new gun law that were changed or re-defined:
Schools: Local school boards will vote on whether or not they want to allow their teachers and other staff members to be armed on school property. Specific training will be required.
Religious Institutions: Church leaders can decide whether to allow their members to bring guns into their buildings. That includes services as well as other church functions.
Bars: Customers may bring guns into bars unless the owner asks them to leave, or posts notice of this in the establishment.
Airports: Guns may now be carried in common areas of airports. If a gun is accidentally brought to the security checkpoint, an individual may leave with the firearm without being arrested.
Government buildings: Guns may now be brought into government buildings that don’t have security checkpoints or metal detectors. An example of this would be a library.
Georgia has gotten a lot of press about this in the recent months. As with any type of change, not everyone is going to agree with it, or be aware of it. The bill also expands Georgia’s “Stand Your Ground” law. Before, a person couldn’t use that defense if a banned firearm was used in self defense. Under the new law, a Stand Your Ground defense could be presented even if a banned or illegal weapon is used.

What it does is give the Churches the option to opt in or opt out...If they opt in, they have to be "all in" from CCW to open carry to long guns.  If they opt out, it is totally out, no guns period.  Now this  is maddening because most of the churches will "opt out" because of theological or liability reasons.  My church will have a debate on this.  In the past the southeastern Methodist left it up to the individual churches. This is the same logic that many food delivery places use.  "No Guns and no resistance".  This law was to put the liability off the food companies when the families of the Perps try to sue.  The company can say that "The driver violated our policies" so we are not libel for damages.
Well it is the same thing with the Churches, they can say that "No Guns" so when some sicko shoots up the church or kills people, the liability ain't on the Church.  I understand the legalities, but morally and ethically I consider this policies wrong.  To deny someone's natural right of self defense is wrong and a violation of Gods law.
If a Church "opt's in", then they can't say no to any type of firearm, they can't discriminate if someone brings an AR pattern rifle in or face a discrimination lawsuit.  This puts the Churches in a unenviable position.
We will have to decide how to proceed.  Criminals and sicko's will target churches because they are a huge target of opportunities for someone wanting to make a statement or get their 15 minutes of fame.  Because of what has transpired us trustees have to decide if we will carry to help provide security and the Church policies on Firearm policies.  Normally I don't carry in Church because the vaguaries of the law and my being a law abiding citizen won't break the law.  But because of what has happened I will carry my compact pistol.
Now I have a Taurus Millennium and it has been a good pistol and reliable but people have been telling me to get rid of the Taurus due to the company lack of quality control and the hit or miss (pardon the pun) quality of their firearms. 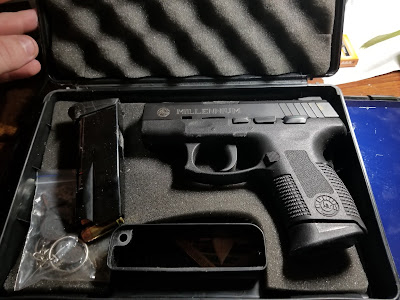 And get a Shield or a Springfield XDM or something like that.   I have contacted my buddy Mack who works at a gun shop about the cost and trade in of my Taurus for another more historically reliable pistol.  This got started when I inquired about a good self defense rounds, I have in the magazines normal ball ammo, but I wanted something more of a "man stopper" kind of round especially if I carry inside a church environment.
Posted by MrGarabaldi at 7:00 AM