Lesson Learned and being a repeater

Well I had a few things I wanted to do this morning, and it didn't happen....Well I had bought on the Black Friday specials a "Bun Warmer" to put in my truck on top of the leather seats.  Ford didn't offer "Heated Seats" when my truck was built,It became an option a couple of years later.  Oh Well  Guess what happens when you forgot to turn it off.... 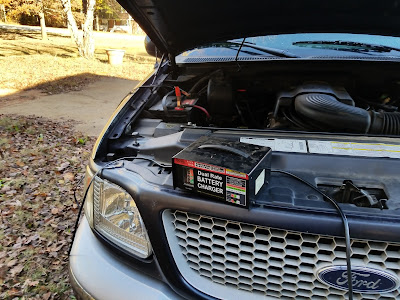 Yep you guessed it....DRT battery.  Well I have a battery tender on it now.  I was planning on visiting my Dad this morning and going to the range.  I had purchased several boxes of Federal ammo 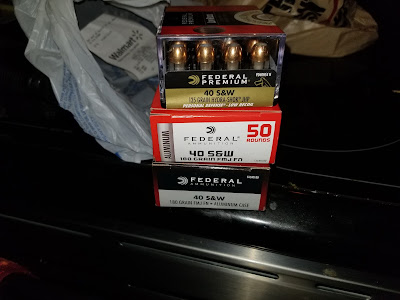 I bought the ammo at Wallyworld, I wanted to get several types of "high Performance" like Hornady critical defense or the  Speer Gold Dot.  Well all they had was the Federal Hydroshok.  I have heard good things about that one.  I was planning on running the ammo through my .40 Cal pistols and especially run the hydroshoks through the Taurus since that is my "carry" gun until I sell it or trade it.  But I wanted to see how the pistol performed.  In the past, the Taurus has proven reliable and functioned every time but the quality has been hit or miss with the company.  it is possible that I got one of the good ones and I wanted to verify it.  if the Taurus feeds the Hydroshoks, then the Hornady and the Speer and feeds it and runs well, I might keep the pistol. 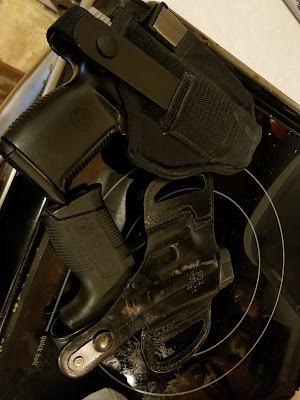 The Other Pistol is my S&W Sigma, the pistol that was such a carbon copy of the Glock that S&W got sued for it.  Well mine is a first generation of that pistol and it works fine, the pistol doesn't fit my hand super well like a SIG or a 1911, but the pistol functions well.

I am retransmitting this signal from Old NFO Blog, the raffle is almost done, if y'all can, please throw some more love at this.

3 days left… We will end the gun raffle at midnight on the 30th, with the drawings to be held December 1st, but the Go Fund Me WILL CONTINUE. Right now we’re at about 61% of our goal, not as far along as we wanted, but at least this should give Andi a good start on the therapy she needs.

Andi, a member of our Blogorado family, has suffered a stroke, which was misdiagnosed initially, leading to complications.  She doesn’t have medical insurance, and is having to fund her rehabilitation on a pay-as-you-go basis.  Several of us have pooled our resources by donating guns from our personal collections, and we’re offering them as an incentive to raise funds for her, along with some non-gun prizes (jewelry, books, etc.) for those who’d prefer them.  The Go Fund Me is HERE. Jenn as a personal post up on Andi, HERE.
You’ll find photographs of all the prizes in three parts:  here, here, here, and here. There is an additional package it’s number 14!  A full polish on a stainless or nickel plate on a blued handgun. This is from Reflections Chrome Plating up in Maine! Remember, donate to the Go Fund Me, HERE, and email your receipt to  4anditherapy@gmail.comtoparticipate in the raffle!!!
The drawing will be via a random number generator on 1 December. First number drawn gets their pick, second number gets their pick, and so on.
Thank you to all that have contributed both packages and donations!
Posted by MrGarabaldi at 10:40 AM