When I started to do some research on the Maxim gun after reading some stuff on WWI, and I decided to look up some information on the machine gun.  I remembered the Germans were very fond of the Maxim gun and used it extensively with the trench warfare on the Western Front.  After WWI, the armistice was brutal to Germany and if I recall they couldn't have any Maxim guns. 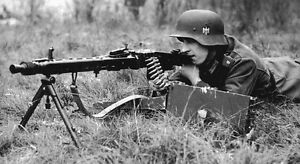 They would up developing the MG40 and MG 42 or as they were called "Hitlers Zipper" because of the sheer amount of bullets they could fire, something like 1200 rounds a minute.
in WWII the only nation that really used the Maxim gun were the Soviets, whom got the design and license to produce it back when the Tsar ran the country before the revolution.  The Soviets found the Maxim good for their needs during WWII, the weapon was robust and very reliable and they used it to support the infantry in the attack or the defense of the Motherland. Left: Quad-Maxim M1910 anti-
aircraft machine gun mount, Moscow, Russia, 21 June 1942. Photo: RIAN / Vladimir Granovskiy / 41394. Right: Soviet anti-aircraft machine gun atop Hotel Moskva in Moscow, Russia. Photo: RIAN / Oleg Knorring / 887721
The Maxim gun was named after Hiram Maxim, an American inventor from Maine. He had an incredible talent for mechanisms, a skill he made his living from as an arms manufacturer. He made a fortune with a range of different schemes, then moved from the USA to the UK, where he produced the Maxim 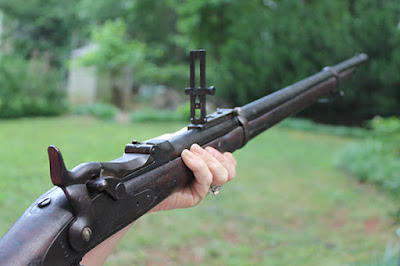 The inspiration for the Maxim gun came from Maxim’s experience with a more conventional weapon. Given the opportunity to fire a .45-70 caliber army rifle, he noticed the kick the gun gave when fired. He wondered whether that energy could be used to power other mechanisms such as automatically loading and firing a gun.
That moment of insight led to all modern automatically firing weapons.

The Maxim was first produced in 1884.
Maxim’s gun was not the first machine gun. The Gatling and Williams guns proved useful during the American Civil War of 1861-1865. During the Franco-Prussian war of 1870-1871, the French fielded the Mitrailleuse, an unwieldy weapon whose limited range left it vulnerable to German artillery and ultimately disappointing as a weapon.
Those weapons were not automatic. They were powered by a soldier turning a crank to load and fire. The Maxim was the first gun to make that unnecessary.
The Maxim gun’s loading and firing mechanism were based around the breechblock.
The barrel and breechblock of the gun were set up to recoil from the force of each shot. After moving three-quarters of an inch, the barrel stopped while the breechblock kept moving, separating from the barrel. As the breechblock moved back, it ejected the spent shell.

The movement of the breechblock connected with a set of levers attached to the ammunition belt. They pulled the belt a short distance, lining a cartridge up with the barrel. The breechblock then hit a spring and reversed its course. It drove the cartridge into the barrel, chambering it ready for the next shot.
The striker then swung in, firing the cartridge.
The Maxim could keep shooting until the gunner let go of the trigger, or the ammunition belt ran out.


The Maxim gun could fire 10 rounds per second or 600 per minute. It set the standard for decades, with the guns of WWI mostly able to fire at somewhere around that rate.
Although the Maxim could fire 600 rounds per minute, it was often excessive for what was needed. To give more control, it had a lever on the right of the gun’s receiver. It controlled a variable oil buffer which changed the rate of fire.
The gun was fed by a canvas belt into which ammunition was inserted. The belt for the original could hold 333 rounds. Its ends were linked together, allowing a continuous stream of fire.


With such a high rate of fire, over-heating could put a severe strain on the gun. A water jacket around the barrel kept it from over-heating, another innovation which became standard in the guns that followed.
Maxim and his machine operators were incredibly talented. Due to his design work and their manufacturing, the Maxim functioned flawlessly from its first trials onward.
The British were quick to seize upon the potential of Maxim’s weapon. Their first production model, manufactured by Vickers, entered service with the army in 1891.


Faced with less well-equipped enemies, the Maxim gun was devastatingly formidable. Britain and other powerful countries used it to highly destructive effect in their colonial wars, mowing down enemies who sometimes did not even carry guns. During the Matabele War of 1893-4, fifty British infantrymen with four Maxim guns held off 5,000 Matabele in a 90-minute engagement, killing 3,000 of their attackers.
One of the first significant colonial uses of the Maxim gun was during the Battle of Omdurman on September 2, 1898. British forces faced a vastly larger force of Sudanese Mahdists, but the British had six Maxim guns.
As the Mahdists jogged toward the British lines, the Maxim guns opened fire alongside the infantry. Hardly a single Mahdist got within a quarter of a mile of their enemies. 11,000 Sudanese died, almost all killed by the Maxim guns. The British and their Egyptian allies lost only 48 men.
“It was not a battle,” one eye-witness wrote, “but an execution.”
The Maxim’s first use against an equally modern army came during the Russo-Japanese War of 1904-5. The Russians fielded Maxim guns, while the Japanese used the Hotchkiss, a machine-gun first brought into production by the French.


The Maxim was heavy, especially when filled with water and accompanied by its ammunition. As a result, it was usually deployed from static positions. It could provide covering fire during an attack or be used for defense, shooting from within a fortification.
One of the early lessons learned by Maxim operators was that they were better off separating the weapon from the wheeled carriage used to transport it. The gun could be settled on a stable position low to the ground, where it would be less obvious to enemies and where they could find cover. Meanwhile, the carriage would continue to draw enemy fire.
The British, Germans, and Russians all fielded guns based on the Maxim in WWI.  The Soviets used them in WWII.   Added together, Maxim-based guns have probably killed more people than any other gun in history.
Sources:
William Weir (2006), 50 Weapons that Changed Warfare
Posted by MrGarabaldi at 2:00 PM