"Our Military's SJW-Driven Abandonment is going to get troops killed.

I saw this article from Kurt Schlichter   I agree with his assessment, I always told people to join the service because I was proud of my military service and it was a legacy thing, as my father and grandfather before me and down the line, My family can trace our service all the way to the revolutionary war, it is how we pay our debt as citizens of the republic, but my son isn't joining and I am actually glad, because the military is really screwed up, the people in charge don't know what they are doing, the people that did know were forced out by the purges by President Obama and he moved his sycophant's in place and they promoted more like supporters of the democrats into higher positions of power.  I am concerned what happens if we get into a fight with a peer power like China or Russia, we are going to get our clocks cleaned, they ain't dealing with the internal rot like we are and that is frightening, will we have to to rebuild after getting our asses handed to us, or will they double down on stupid and keep it up? 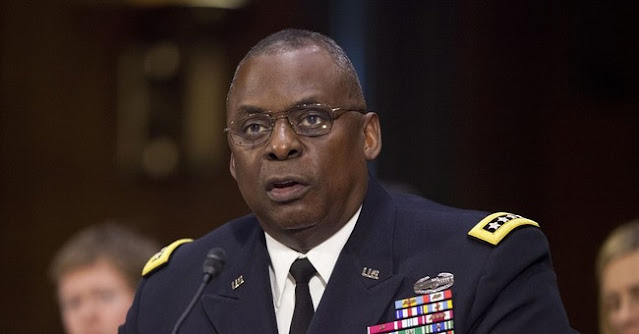 President Xiden nominee before Congress pledging to "Rid the Armed Forces of all right wing extremist elements" ...Funny that the the left wing wasn't mentioned....I suppose that those people will make the "Zampolits" that will be necessary to guarantee the "political loyalty of the Military"

It gives me no pleasure to say that I no longer recommend that young people join the military, and I’m not alone. The non-Blue Falcon veteran community is in full revolt against the conscious decision to decline embraced by our current military leadership. After failing to win a war in the last 20 years – and don’t say Syria, because the second President * woke up in the Oval Office wondering how he got there, more of our troops were heading back into the hellscape for reasons no one has bothered to articulate – the military has decided to target an easier enemy, i.e., other Americans.

See, the problem with me and the other vets who are disgusted by the brass’s choice to focus on SJW priorities instead of, you know, successfully deterring or defeating America’s enemies, is that we actually listened to what we were taught when we were coming up. Most of us were trained by the heroes who put the shattered American military together after the Democrat war in Vietnam broke it. We learned about leadership, about putting mission first but taking care of people always, and about objectives and how to attain them.

None of that’s a thing anymore.

So, count us out from complicity with the degeneration of our proud institution into a giant gender studies struggle session. And that’s a big deal. Do you know where the military gets a huge chunk on its recruits? Legacies. These are young troops who want to be like their father or grandfather or big brother or neighbor or other role model. I was the third-generation commissioned officer in my family, on both sides. Guess what? Right now, if one of my kids goes in, it’s against my advice. And again, I am not alone. I hear this over and over and over from other vets. And it makes me furious.

Congratulations, Pentagon. This is all on you.

You put two divisions behind wire in D.C. to protect against phantom insurrections by guys who dress like Vikings. And then you can’t even feed the troops, or house them. Gosh, if only there was a great big five-sided building full of generals just a couple miles away to square that idiocy away.

And now, though we have not won a war in two decades, our military has plenty of time to stop training and focus on purging the ranks of people who like the politicians the current administration opposes. I eagerly await the introduction to the new 69D MOS – political officer. A zampolit for every battalion – hell, why not every company?

And don’t patronize us with baloney about how this is just about rooting out all those secret “extremists” lurking in the ranks – that’s right up there with sending the new second louie down to the supply room to retrieve a box of grid squares. How about you stop trying to expel these mystery “extremists” and start firing the incompetents all around you?

Sadly, this trickle-down SJW foolishness is reaching what used to be the pointy end of the spear. Generals and colonels adopt it because if they don’t, they’ll get tossed out – if you invest three decades in the green machine, it must be awfully tempting to hold your tongue to nail down that retirement and then get the hell out ahead of the deluge.  It’s the company grades who buy this pap who are most disconcerting. One lieutenant – for you civilians, lieutenants are the wisest officers in the military, according to lieutenants – went on Twitter to inform me and some other people who were actually alive and in the military the last time America won a war that when we Neanderthals were serving, the military was awash in “white supremacy.”  Could have fooled me. When I got off active duty the first time 30 years ago this May, I was stunned at how often race came up back in the civilian world. It almost never did when I was in the service, though in basic training it would have been nice for the awesome power of my pallor to keep Drill Sergeant Whittlesey from dropping me for countless sets of 20.

But hey, some 23-year-old assistant S2 who operates the coffeemaker doubtless has better insights into stuff happening before he was born that those of us who were actually there. The only positive thing about my interaction with that guy was my relief in knowing that I was no longer the dumbest lieutenant in the history of the United States military.

We had our imperfections and misadventures back in the day, sure, but if some idiot had done something bigoted to another solder, we would have slammed him. The only thing that mattered when a new soldier showed up was whether or not he was squared away. But not now. No, winning battles is hard, but internal snipe hunts are easy and fun! Why focus on external warfare when the career payoff for witch-hunting within the organization is so much bigger? Check out this new Navy pledge – us vets’ enlistment/commissioning oaths were apparently insufficient for today’s woke battlespace:

“I pledge to advocate for and acknowledge all lived experiences and intersectional identities of every Sailor in the Navy. I pledge to engage in ongoing self-reflection, education and knowledge sharing to better myself and my communities. I pledge to be an example in establishing healthy, inclusive and team-oriented environments. I pledge to constructively share all experiences and information gained from activities above to inform the development of Navy-wide reforms.”

The most disconcerting part of this is that it was apparently written on purpose. Is the next thing we’ll see some sort of mandatory woke Space Force interpretive dance?

No, I do not recommend anyone subject themselves to this sort of four-year camo sociology seminar in which they must “pledge to advocate for and acknowledge all lived experiences and intersectional identities of every Sailor in the Navy” or any other branch. My intersectional identity is “America,” and I am utterly uninterested in any other identity.

Maybe the brass should focus on killing America’s enemies, and maybe not running ships into other ships? Both those things would be totally awesome.

War is a serious business, even for guys like me who ran heavily armed carwashes. But this current tail-chasing is not serious. The military is hollowing out as people vote with their combat boots. Word from inside is that it can’t keep troops from ETSing – that is, leaving the service when their obligation ends. If our troops want their thoughts controlled and to be programed into little lefty conformobots, they can go off to college – the Dems want to give it away to slackers for free anyway, so who needs to ruck march and attend Bill Kristol’s latest war to get the G.I. Bill?

The military used to be a welcoming safe space for patriots. But no more. With this insane babbling about “internal enemies,” does anyone think that potential recruits do not understand that this slur is what the liberal elite that the military brass obeys calls people like them and their families? Why would you join an organization that sees you as an enemy?

We can laugh at the antics, but the terrible reality is that this crap is going to get a bunch of our young people killed. Let’s be very clear – when your priority is social justice nonsense instead of preparing to fight and win, you are opening up a lane for the enemy and the enemy is going to drive right through it.

But look on the bright side. When something horrible happens – maybe the Chinese will send a carrier to the bottom, for example – we can all take comfort in the fact that our sons and daughters, because it’s us patriots’ sons and daughters who usually fight and die in America’s wars, perished because our leadership failed to prepare, but at least they died fully aware of trans intersectionality.