We are in deep trouble, China is positioning herself as the preeminent power for the 21st century, they have been spending a lot of money upgrading their military with the debt we have financed them with all the crap we have bought from them. They are expecting a conflict with the United States in the next 20 years and they want to be ready, or sooner when they decide to seize Taiwan because we are bound by treaty to defend the Taiwanese in case the Red Chinese attack. 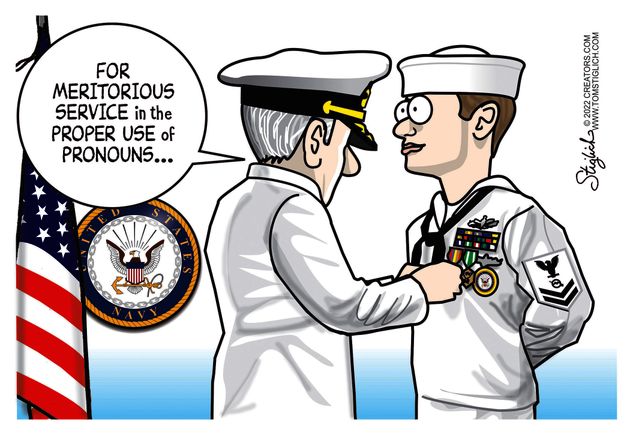 And what are we doing....Making sure that the proper pronouns are used...

If I sound like I'm picking on the Squids, I'm not, they are just the most visible symbol..for the moment, all the services have this problems...even the vaunted Marines.

The U.S.Army are having a lot of problems meeting "Recruiting" goals, The reasons giving come from the lack of physical conditioning of the recruits, to lack of interest, I'm sure that after being programmed since grade school to hate the United States, encouraging Citizens to sign up to defend her is kinda hard I suppose. so blame your liberal school systems...but by Gaia, the kids will know the proper pronouns as to not misidentify the 57 different genders...or something like that.

It will take 20 years to erase the rot from our Military institutions, if we get that much time before China gets froggy and jumps.

China’s Ministry of National Defense says “the test reached its desired objective” and was of a defensive nature—not aimed at any particular country.

While the PLA did not reveal which missile interceptor was used, it is highly possible that it was the HQ-19. Based on the H-9 surface-to-air missile, the HQ-19 uses a dual-purpose exosphere kinetic-kill vehicle for ballistic-missile and satellite targets and has an estimated range between 1,000 km (621 mi.) and 3,000 km. It is often compared to the U.S Terminal High Altitude Area Defense BMD system.

Given the maturity of China mid-course BMD, the next steps would be the development and validation of terminal-stage BMD and finally integrating such technology into its massive Type-055 missile destroyers, giving the PLA greater standoff missile-defense capability.