I decided to roll with this song, and to be honest, I have a love/hate relationship with this song, while I was in the Gulf, the radio station AFDN (Armed Forces Desert Network) played this song....at first I liked it because we honestly believe that we were on on a crusade to right a wrong and the whole world agreed with us.  We had the support of the American people, which for the Vietnam vets whom were still with us was a welcome change from what they had gone through.  We were well trained and motivated, we had good equipment and knew how to use it. But the first 50 times I heard the song,it was alright but it seemed to come on every hour on the hour and after a while we hated the song, I'm talking with a visceral hate.  I heard that song soo much that when I came back to the world, I refused to listen to that song, We GI's talked about kicking Lee Greenwood in the nuts for this song, but the truth of the matter was, it wasn't his fault, he wrote a damm good song, but we got really burned out on it.  It took over 20 years before I can hear the song and not cringe.  So in honor of "BREXIT 1776" here is Lee Greenwood "God Bless the U.S.A"


"God Bless the USA" is an American patriotic song written and recorded by country music artist Lee Greenwood, and is considered to be his signature song. The first album it appears on is 1984's You've Got a Good Love Comin'. It reached No. 7 on the Billboard magazine Hot Country Singles chart when originally released in the spring of 1984, and was played at the 1984 Republican National Convention with President Ronald Reagan and first lady Nancy Reagan in attendance, but the song gained greater prominence during the Gulf War in 1990 and 1991, as a way of boosting morale.
The popularity of the song rose sharply after the September 11 attacks and during the 2003 invasion of Iraq, and the song was re-released as a single, re-entering the country music charts at No. 16 and peaking at No. 16 on the Billboard Hot 100 pop chart in 2001. The song was also re-recorded in 2003 and released as "God Bless the USA 2003". Greenwood also wrote a Canadian version of this song called "God Bless You Canada". The song has sold over a million copies in the United States by July 2015. 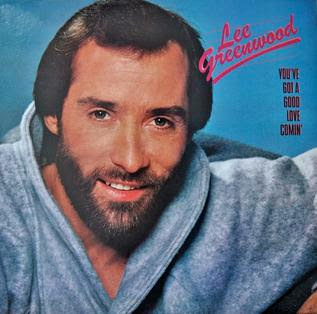 Greenwood wrote God Bless the USA in response to his feelings about the shooting down of Korean Air Lines Flight 007. He said that he "wanted to write it my whole life. When I got to that point, we were doing 300 days a year on the road, and we were on our fourth or fifth album on MCA. I called my producer, and I said I have a need to do this. I've always wanted to write a song about America, and I said we just need to be more united." As for writing the song itself, Greenwood wrote that it more or less "wrote itself", and that the lyrics flowed naturally from the music as a reflection of his pride to be American.
The reason behind the cities chosen in the song Greenwood says, "I'm from California, and I don't know anybody from Virginia or New York, so when I wrote it—and my producer and I had talked about it—[we] talked about the four cities I wanted to mention, the four corners of the United States. It could have been Seattle or Miami but we chose New York City and Los Angeles, and he suggested Detroit and Houston because they both were economically part of the basis of our economy—Motortown and the oil industry, so I just poetically wrote that in the bridge."

In the song, an unnamed man sings about how, if he were to lose everything he had and had to start again from scratch, he would do it in the USA because he is guaranteed his freedom in America. He remembers how other Americans in history had died to secure this freedom, and declares that if he is ever called upon to defend the USA today, he will gladly stand up and fight because he loves the country.