This is a worthy event to investigate, for anyone interested in the Warrior Ethos. http://www.stevenpressfield.com/ 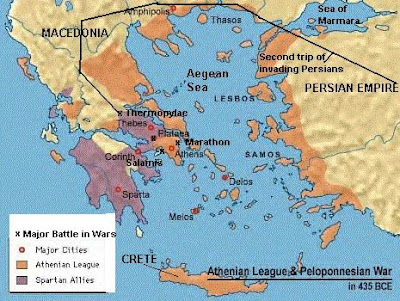 The Second Persion Invasion of Greece.

A Greek force of approximately 7,000 men marched north to block the pass in the summer of 480 BC. The Persian army (alleged by the ancient sources to have numbered one million but actually considered at between 100,000 and 300,000) arrived at the pass in late August or early September. Vastly outnumbered, the Greeks held off the Persians for three days in combat, before the rear-guard was annihilated in one of history's most heroic last stands. During two full days of battle, the small force led by King Leonidas I of Sparta blocked the only road by which the massive Persian army could pass. After the second day of battle, a local resident named Ephialtes betrayed the Greeks by revealing a small path that led behind the Greek lines. Aware that his force was being outflanked, Leonidas dismissed the bulk of the Greek army, and remained in a rearguard element of 300 Spartans, 700 Thespians, 400 Thebans and perhaps a few hundred others, the vast majority of whom were killed.

I had the opportunity to visit the site of the Battle of Thermopylae, while training with Greek Special Forces prior to the 2004 Olympics. 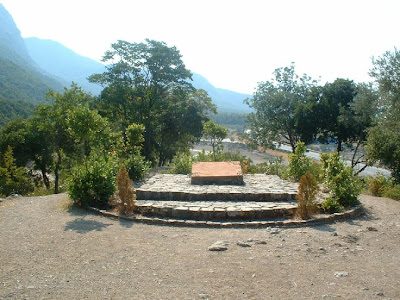 Simonides Monument on the Kolonos hillock, believed to be the actual location of the Last Stand. 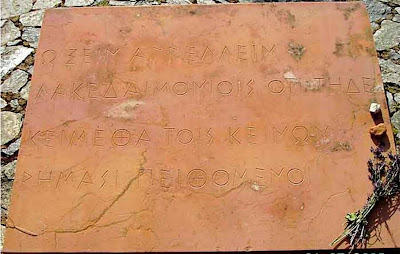 
At the time of the battle, Thermopylae was actually a pass between the mountains and the sea; control of this pass was critical to the Greek defensive strategy. Due to seismic activity, however, the shoreline has shifted, and the seas have withdrawn. A modern highway roughly follows the ancient shoreline. 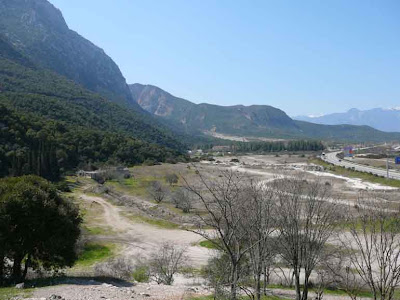 A modern view of the pass at Thermopylae, viewed roughly from the area of the Spartan camp northward toward the Persian position. The modern road marks the ancient shoreline. 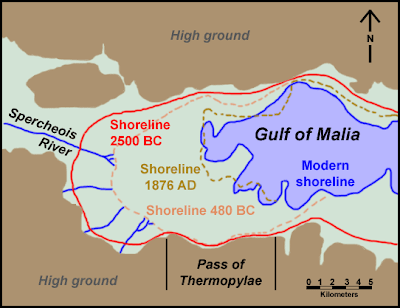 Thermopylae shoreline changes over the course of history.


Thermopylae is viewed by scholars as “the battle that changed the world”. The clash between the Spartans and other Greeks on one side, and the Persian horde on the other, was a clash between freedom and slavery. The Greek victories at Thermopylae Marathon, fought some ten years earlier, were turning-points not only in the history of Ancient Greece, but also of World History; subjugation to the Persians would have snuffed out Western Civilization in its infancy. In the mid-19th century, the economist John Stuart Mill described the battle of Marathon as “more important than the battle of Hastings, even as an event in English history”. 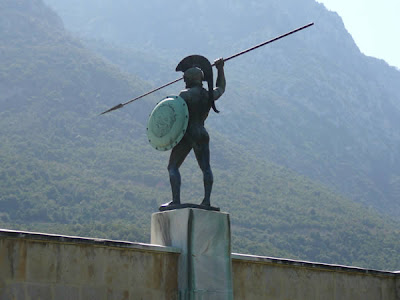 The modern monument of the Spartans with the bronze statue of Leonidas. An inscription reads Molon Labe; King Leonidas' reply to Xerxes demand that the Greeks lay down their arms: "Come and Get Them."
Posted by MrGarabaldi at 6:57 PM