I read this on Yahoo News.  I remember Margaret Thatcher going toe to toe with the Soviets and she was known as the "Iron Lady".  The Iron Lady would support Ronald Reagan when he was making points against the Soviets.  I also remember that she went to war to get the Falklands back from Argentina who had horrible timing, if they had waited several more months the Ark Royal the aircraft carrier used by the British to great effect would have been decomissioned as part of the austerity measures as the conservatives were trying to cut cost to repair the damage done by decades of labour rules to the economy.  The resulting war gave the British their pride as a nation back from the doldrums of the 60's and 70's.  To make the call to recapture the Falklands was gutsy because Britain almost didn't have the force projection to make the mission successful.  She made it despite the various naysayers that said that Britain should accept the inevitable decline in its empire and the associated prestige and national pride.  I still think it was her finest hour.


Margaret Thatcher, the first woman ever to serve as prime minister of Great Britain and the longest-serving British prime minister of the 20th century has died at age 87.
"It is with great sadness that Mark and Carol Thatcher announced that their mother Baroness Thatcher died peacefully following a stroke this morning," Lord Timothy Bell said today. "A further statement will be made later."
Thatcher had significant health problems in her later years, suffering several small strokes and, according to her daughter, struggling with dementia.
In Dec. 2012, she was underwent an operation to remove a bladder growth, longtime adviser Tim Bell told The Associated Press.

But during her long career on the political stage, Thatcher was known as the Iron Lady. She led Great Britain as Prime Minister from 1979 to 1990, a champion of free-market policies and adversary of the Soviet Union.
PHOTOS: Margaret Thatcher Through The Years

Many considered her Britain's Ronald Reagan. In fact, Reagan and Thatcher were political soul mates. Reagan called her the "best man in England" and she called him "the second most important man in my life." The two shared a hatred of communism and a passion for small government. What America knew as "Reaganomics" is still called "Thatcherism" in Britain.
Like Reagan, Thatcher was an outsider in the old boys' club. Just as it was unlikely for an actor to lead the Republicans, the party of Lincoln, it was unthinkable that a grocer's daughter could lead the Conservatives, the party of Churchill and William Pitt -- that is, until Thatcher. She led the Conservatives from 1975 to 1990, the only woman ever to do so.
Personal Life
Thatcher was born Margaret Hilda Roberts on Oct. 13, 1925 in Grantham, England. She attended Somerville College, Oxford, where she studied chemistry, and later, in 1953, qualified as a barrister, specializing in tax issues.

She married Denis Thatcher on Dec. 13, 1951, and their marriage lasted for nearly 52 years until his death in June 2003. The couple had twins, Mark and Carol, in 1953.
When Thatcher was elected to Britain's House of Commons in 1959, she was its youngest female member. In 1970, when the Conservatives took power, she was made Britain's secretary of state for education and science. In 1975, she was chosen to lead the Conservatives, and she became the prime minister in 1979.
WATCH: May 4, 1979: Margaret Thatcher Becomes Prime Minister
Her policies were controversial. She took on the nation's labor unions, forcing coal miners to return to work after a year on strike.
"We should back the workers and not the shirkers," she said in May 1978.
She pushed for privatization, lower taxes, and deregulation. And she sought to keep Britain from surrendering any of its sovereignty to the European Union.
FULL COVERAGE: Margaret Thatcher 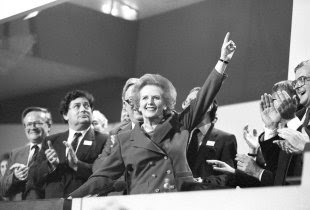 Thatcher receives standing ovation at Conservative Party Conference in October 1989. REUTERS/Stringer/FilesThatcher's admirers say she rejuvenated Britain's faltering economy. Her critics say the rich got richer and the poor were left behind.
In the inner cities, Thatcherism brought a violent backlash. There were calls from her own party to change course. But Thatcher resisted.
"You turn if you want to," she said in October 1980. "The lady's not for turning."
She had courage in abundance. In 1982, when Argentina invaded the Falkland Islands, she took Britain to war -- and won.
In 1984, she narrowly escaped being killed when the IRA bombed her hotel during a party conference. The morning after, she convened the conference on schedule -- undaunted.
She recognized Mikhail Gorbachev as a man who could help to end the Cold War, commenting famously, "I like Mr. Gorbachev. We can do business together."
Ronald Reagan thought so, too. Together, Thatcher and Reagan savored victory in the Cold War as their proudest achievement. But while Alzheimer's forced Reagan to retire from public life, Thatcher kept on long after leaving Downing Street.
She became Baroness Thatcher, a symbolic leader for a party that struggled to find a worthy successor.
By the time of President Reagan's funeral in 2004, Lady Thatcher had already suffered several strokes. She was a silent witness at her friend's farewell, but she had the foresight to record a eulogy for Reagan several months earlier.
"As the last journey of this faithful pilgrim took him beyond the sunset, and as heaven's morning broke, I like to think -- in the words of Bunyan -- that 'all the trumpets sounded on the other side," she said
Posted by MrGarabaldi at 3:34 PM