I have been busy with work and cub scouts, My son and I went to the U.S.S. Yorktown to "camp out" on a real aircraft carrier.  This from Wiki:"
USS Yorktown (CV/CVA/CVS-10) is one of 24 Essex-class aircraft carriers built during World War II for the United States Navy. She is named after the Battle of Yorktown of the American Revolutionary War, and is the fourth U.S. Navy ship to bear the name. Initially to have been named Bon Homme Richard, she was renamed Yorktown while under construction to commemorate USS Yorktown (CV-5), lost at the Battle of Midway in June 1942. Yorktown was commissioned in April 1943, and participated in several campaigns in the Pacific Theater of Operations, earning 11 battle stars and the Presidential Unit Citation.
Decommissioned shortly after the end of the war, she was modernized and recommissioned in the early 1950s as an attack carrier (CVA), and then eventually became an antisubmarine carrier (CVS). She was recommissioned too late to participate in the Korean War but served for many years in the Pacific, including duty in the Vietnam War, in which she earned five battle stars. Late in her career she served as a recovery ship for the Apollo 8 space mission, was used in the movie Tora! Tora! Tora! which recreated the Japanese attack on Pearl Harbor and in the science fiction film The Philadelphia Experiment.
Yorktown was decommissioned in 1970 and in 1975 became a museum ship at Patriot's Point, Mount Pleasant, South Carolina. She is a National Historic Landmark." 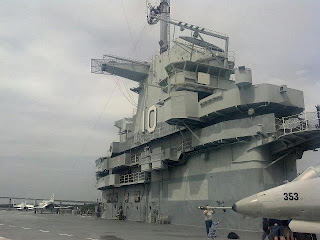 We also took a shuttle boat to the Fort Sumter National park, the place where the War against Yankee aggression started, er the war between the states, er..the Civil War started.  The trip is also a worthwhile trip.  You can see how strategic the location was.  They upgraded the fort after the war, and installed some of the disappearing rifles as part of coastal defence back in the day before the advent of airplanes and missiles made such defences obsolete. 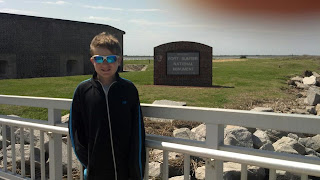 Now a bit about the Boston Bomber..you know the jerks that paralized a city for 2 days and had people hiding in their house, I cribbed this from Boortz:

"The people directly responsible for the bombings in Boston are either dead, in the case of the older bomber, or shot all to hell and in custody, in the case of the younger bomber.  (I don’t particularly like giving these people the publicity they want by naming them).  So, is it over?  With the death of one, and the arrest of the other brother, is this case pretty much closed?  If they acted alone and absent outside coaching or influence, yes.  If not … no.  It is most certainly not over.
So there we have the Mayor of Boston yesterday telling America that these two bombers acted alone.  That’s it.  It’s over.  We killed on, the other is in custody.  Case closed.  Nobody else was involved  We have them, and there’s nothing  more to see here.
Here’s an oddity for you to consider.  When there is a violent incident; a mass shooting, a bombing, a political assassination; the media seems to be instantly posed to blame it on right wingers.  This happened all the way back with the assassination of John F. Kennedy. I lived in Texas at the time, and immediately the national media was blaming right wing elements for Kennedy’s death.  In some areas of the country offices of right wing organizations such as The John Birch Society were being vandalized.  In California cars with Texas license plates were being vandalized as well.  Then … well what do you know? … the assassin turned out to be a communist?  Don’t you just hate it when that happens?
This is common behavior for the left and the 0bamaMedia.  There’s been an act of violence.  Blame the right.  After the Boston bombings CNN’s Wolf Blitzer was saying that due to the fact it was Patriot’s Day, and Tax Day, perhaps anti-government right wing groups are to blame.  Looney old Chris Matthews was also blaming the right, saying that normally domestic terrorism comes from the right.  We had a Salon Magazine columnist begging for the bombes to be white males.   CNN had a so-called counter-terrorism expert on the air who said that pressure cooker bombs were a signature of the right wing, though there is absolutely no evidence whatsoever for that statement.  MSNBC puts a Harvard Professor on the air to suggest that the “far right” might be responsible.  An NPR “journalist” said that the attack could have been right-wingers celebrating Columbine or Hitler’s birthday.  Can you believe this stuff?  Well, believe it.  It’s the normal course of conduct after an incident such as this … right up until the time when it’s discovered that the perps aren’t right-wingers, as is normally the case.
So then did you see the Mayor of Boston yesterday?  After the identity and political and religious leanings fo the bombers became known the whole incident suddenly morphed from being caused by some evil right-wing political movement to two men out on their own..Sure enough the Boston mayor, a Democrat (of course) was telling America that the bombers acted alone.  It was just them.  Case pretty much closed.
The needs of political correctness dictate the “acted alone” conclusion.  If government, particularly the Feds and Homeland Security, do not use the “acted alone” approach then the follow-up question will naturally be: “Well, what are you doing to find out who was involved with the bombers?  Who influenced them?  What happened on that trip to Russia?  What about the Mosques the brothers attended?  Are there other known radicals involved with that Mosque?  Have known radicals who could have had influence on the members visited Mosque?   You cannot address these questions without focusing on Muslims – on the wonderful, serene, peaceful, loving religion of Islam.  And of course as soon as you start focusing on Muslims, on Mosques, and on the associates of the two bombing brothers --- you’re then engaging in the hideous, horrible practice of profiling!  OMG!  It might even be racial profiling!  After all, the vast majority of Muslim radicals are from the Middle East!
Of course as long as you think that right wing militias committed some heinous act, or the Tea (Taxed Enough Already) Party or white supremacists – you can blame groups and movements and investigate to your heart’s content.  After all … these people are perceived as predominantly white, and to make things worse, they’re largely believed to be white (ugh) males!  But if a protected religious or racial minority might have been involved … be careful!  You don’t want to profile!"

This is also an installment of my Monday Music, I am going to pull this from the "Born in the U.S.A." album from Bruce Springstein.  I don't like his politics but his older albums are good where they spoke from the blue collar workers point of view.  This song is "I'm on fire"  it is a short song and a real cool video with a 57 T-bird.

I'm on Fire" was recorded in February 1982 during the first wave of Born in the U.S.A. sessions. This took place in impromptu fashion when Springsteen started making up a slow tune on guitar for some lyrics he had, some of which had been written for Spanish Eyes, which would later surface on The Promise, and drummer Max Weinberg and keyboardist Roy Bittan, hearing it for the first time, created an accompaniment on the spot. The result was a moody number that merges a soft rockabilly beat, lyrics built around sexual tension, and synthesizers into an effective whole; it was one of the first uses of that instrument in Springsteen's music.
The song peaked at #6 on the Billboard Hot 100 pop singles charts in early 1985. It was the fourth of a record-tying seven Top 10 hit singles to be released from Born in the U.S.A. It is also remarkable that the single reached #1 in the Netherlands for 3 weeks in August 1985, at the same time as 2 other Springsteen singles ("Dancing in the Dark" and "Born in the U.S.A.") were occupying the Top 12.
Unlike the first three singles from the album, no remixes were made for "I'm on Fire" (nor were any made for any of the subsequent singles released).

The music video for the song was shot in March 1985 in Los Angeles, and was directed by filmmaker John Sayles. Unlike the previous videos from the album, this video was not a performance clip but rather portrayed a dramatic storyline that alluded to some of the song's emotions.
In it, Springsteen plays a working class automobile mechanic with an attractive, married, very well-to-do, mostly unseen female customer who brings her vintage Ford Thunderbird in for frequent servicing, always requesting that he does the work. She leaves a small bunch of keys with him when she leaves in her car, possibly including house keys, but declines his offer to bring the car out to her house when it's ready. Later that night, he drives the car up to her mansion high in the hills above the city. He looks to a second floor window with the light on and is about to ring the bell, when he thinks better of it and drops her keys in the mailbox next to the door. He smiles wistfully and walks away down towards the city lights below.[4]
The video began airing in mid-April, received extensive MTV airplay, and later in the year won the MTV Video Music Award for Best Male Video.
Posted by MrGarabaldi at 11:17 PM