I have blogged about this several times, I am a student of history, and I believe that Patrick Henry, Thomas Pain and others would have been classified as "bloggers" if such a thing existed back then.  I remembered where Senator Dianne Feinsterin from the peoples republic of California 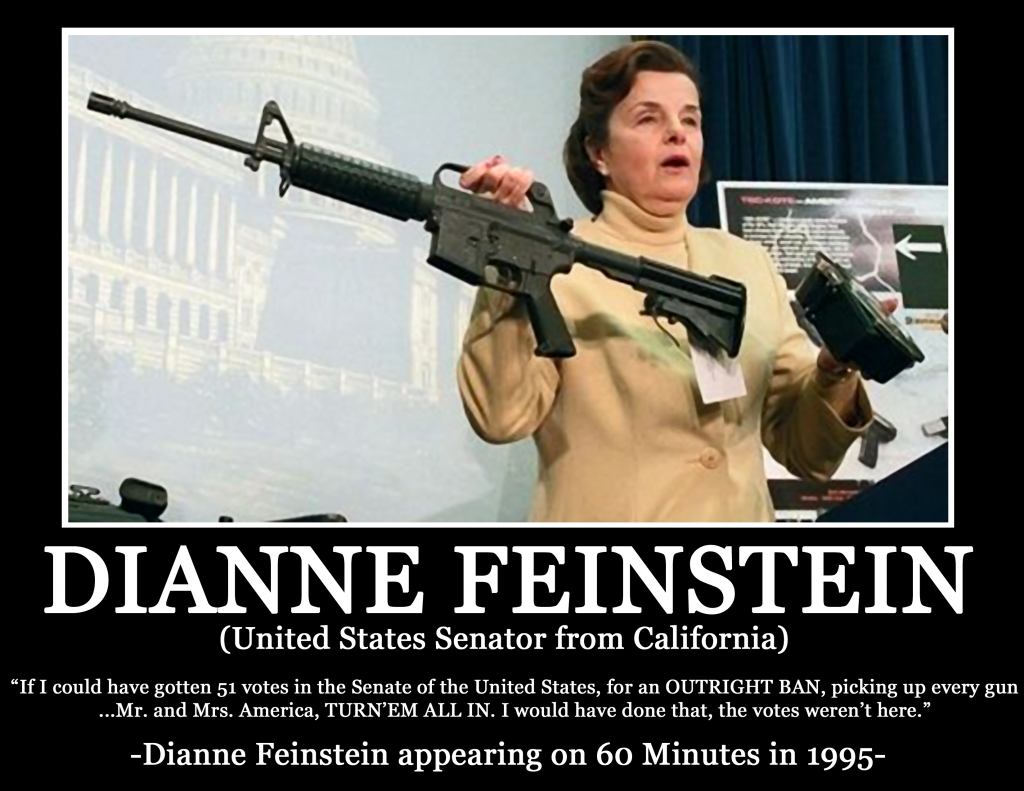 Yep the same person that doesn't like those nasty old assault rifles....except the ones her security detail uses.  Well anyway, she is trying to push a bill through that basically said that only "established media" has certain protections under the law...you know the establishment media...the ones that are overwhelming democrat, carries the water for the President, and will not say anything derogatory about the president or anybody else connected with the liberal elite.  The same ones she wants to grant protection.  Remember it was a blogger that broke "Fast and Furious"  the establishment media would not touch the story because they support the agenda, the establishment media has become the party organ for the democratic party like "Pravda" was the organ for the communist party of the Soviet Union.  They regurgitate the talking points straight off the printout from the DNC, there is no attempt to be "unbiased", then they wonder why soo many people don't trust the established media.
Now bloggers are getting the same protection as the dead tree media, that is good thing.

I ripped this off from Patriot USA blog

Posted by PatriotUSA at 1:56 AM

In a decision released by the 9th Circuit Court Of Appeals:

The protections of the First Amendment do not turn on whether the defendant was a trained journalist, formally affiliated with traditional news entities, engaged in conflict-of-interest disclosure, went beyond just assembling others’ writings, or tried to get both sides of a story.


As the Supreme Court has accurately warned, a First Amendment distinction between the institutional press and other speakers is unworkable: “With the advent of the Internet and the decline of print and broadcast media . . . the line between the media and others who wish to comment on political and social issues becomes far more blurred.” Citizens United, 558 U.S. at 352. In defamation cases, the public-figure status of a plaintiff and the public importance of the statement at issue—not the identity of the speaker—provide the First Amendment touchstones…."
We therefore hold that the Gertz negligence requirement for private defamation actions is not limited to cases with institutional media defendants. Obsidian Finance Group LLC et al v. Crystal Cox (9th Cir. Jan. 17, 2014), pp. 11-12.


… I think that’s right, not just as a matter of First Amendment principle but also as a matter of history and precedent (as I documented at length in Freedom for the Press as an Industry, or for the Press as a Technology? From the Framing to Today, 160 U. Pa. L. Rev. 459 (2012))….
http://www.volokh.com/2014/01/17/bloggers-media-first-amendment-libel-law-purposes/


----------------
Congress shall make no law respecting an establishment of religion, or prohibiting the free exercise thereof; or abridging the freedom of speech, or of the press; or the right of the people peaceably to assemble, and to petition the Government for a redress of grievances.
First Amendment To The United States Constitution
This is a fair and just ruling coming from one of, if not the most liberal appeals court in our country. Maybe the 6th Circuit Court Of Appeals is more liberal? At any rate, this ruling gives 1st Amendment protection to those NOT from the media. This means to the public and bloggers, writers,you and me. The mode of publication, paper, internet, blog, mass media was not a determining factor in this ruling. It was taken under consideration but this ruling gives the public and bloggers equal protection under the 1st amendment. While I want to feel 'secure' and safe with this ruling, I do not. My reasoning is simple. It is what this and past administrations have done to chip away at our freedom and liberty. The 1st Amendment is the cornerstone of our Constitution, just my opinion. Without it, what do we have? Do not take this the wrong way and I am not an expert on the Constitution or Constitutional law. I have read the Constitution, The Bill Of Rights, The Federalist Papers, and many books relating to our Constitution.
Eugene Volokh is the attorney who represented the plaintiff, Crystal Cox in the case that was appealed to the 9th Circuit Court Of Appeals. If you have the time, use the links I have shared at the top of the post. It is very interesting reading and Mr. Volokh has done an excellent job. Still, the times being what they are, the arming of our Law enforcement agencies with massive and heavy weapons, the way many (not all) LEO and government agents dismiss, run over our 1st Amendment rights every day is of grave concern to me. It has been for years and I will be the first one to admit, I have a jaded, politically INCORRECT, very conservative view that has been formed over the course of my lifetime. The details of why and how I became very conservative are not important, at least not right now. Let me just say this: I am the conservative backlash to a very liberal upbringing.
The 9th is not the first Circuit Court Of Appeals to rule on this but it is very noteworthy that it came from the 9th, which is based in San Francisco. The 9th has typical upheld 1st Amendment individual, group, employee rights, especially when it has been in cases that were against corporations. Will the 9th pull reversal on this ruling? It has a track record of doing so and it would be a huge miscarriage of justice and a further erosion of our freedom if the 9th does reverse the ruling.
I see this as some good news and time will tell if this ruling stands up or not. The current regime has proven time after time they could care less about our rights, freedom or liberties, as the Founding Fathers set them forth in our Constitution.
None of us should be standing still or silent.
Posted by MrGarabaldi at 4:23 PM