The Yamato and other musings while I am stuck at home

I am stuck at home, I had a medical procedure performed that did not go as planned so I will have a more invasive procedure done later this year to correct the problem.  I was planning on going to the NRA convention this year but I had to have this procedure done instead.   It had to do with timing.  I could have waited and had the procedure done later, but it would put me into the summer schedule and there is a LOT of overtime in that so I had to forgo the NRA trip I wanted to do and meet all the people that I blog with.  I am hoping there will be another city mentioned soon and what dates so I can make sure that my calender is clear.
So anyway I am stuck at home, and we got a "smart" tv for Christmas and I discovered I could use it in conjunction with my smart phone and watch videos that I find on my phone, play them through the TV with the "YouTube" app.  So here I was bored silly, having to stay seated in the recliner, well I was surfing Star Trek TV shows, especially the remastered Original series with the "Doomsday Machine"
You Tube is really cool, what can I say.  I also watched clips from the Star Trek II The Wraith of Khan, I consider it the best of the movies that involved the original series.
It had good and bad guys, Starships shooting at each others, an excellent soundtrack, it had action, adventure, a Horatio Hornblower in Space kinda thing.
Star Trek II: The Wrath of Khan is a 1982 American science fiction adventure thriller film released by Paramount Pictures. The film is the second feature based on the Star Trek science fiction franchise. The plot features Admiral James T. Kirk (William Shatner) and the crew of the starship USS Enterprise facing off against the genetically-engineered tyrant Khan Noonien Singh (Ricardo Montalbán), a character who first appeared in the 1967 Star Trek television series episode "Space Seed". When Khan escapes from a 15-year exile to exact revenge on Kirk, the crew of the Enterprise must stop him from acquiring a powerful terraforming device named Genesis. The film concludes with the death of Enterprise's captain, Spock (Leonard Nimoy), beginning a story arc that continues with the 1984 film Star Trek III: The Search for Spock and concludes with 1986's Star Trek IV: The Voyage Home.
Well I went from Star Trek to "Star Blazers"  A Japanamation cartoon that I saw in the late 70's.  I really loved that series and saw both seasons.  There was a 3rd season that was released only in Japan, I was watching those also.
Well I went and watched several episodes of "Star Blazers"  which was called "Space Cruiser Yamato" in Japanese.  Well something youtube does is put up video's in the Que for you to watch based on the interest you have typed in.  Well there was a movie made in Japan called " The Mens Yamato".  It was about 2 hours long and it was really well done.  I spend the time seeing a different view, and yes it did show the draconian discipline that the Japanese Military was known for from its petty officers to the rated seamen.  The story starts about a young Japanese women that wants to go to the location of the Yamato sinking, later in the movie, it was to return her fathers ashes to join his shipmates that have died there, kinda like what the U.S.S. Arizona survivors do when they die, they frequently ask to have their ashes released into the water where their shipmates died.  The story talks about the bond of loyalty people have for their ship and shipmates.   A very well done movie.

Yamato (大和?), named after the ancient Japanese Yamato Province, was the lead ship of the Yamato class of battleships that served with the Imperial Japanese Navy during World War II. She and her sister ship, Musashi, were the heaviest and most powerfully armed battleships ever constructed, displacing 72,800 tonnes at full load and armed with nine 46 cm (18.1 inch) main guns. Neither ship survived the war.
Laid down in 1937 and formally commissioned a week after the Pearl Harbor attack in late 1941, Yamato was designed to counter the numerically superior battleship fleet of the United States, Japan's main rival in the Pacific. Throughout 1942 she served as the flagship of the Japanese Combined Fleet, and in June 1942 Admiral Isoroku Yamamoto directed the fleet from her bridge during the Battle of Midway, a disastrous defeat for Japan. Musashi took over as the Combined Fleet flagship in early 1943, and Yamato spent the rest of the year, and much of 1944, moving between the major Japanese naval bases of Truk and Kure in response to American threats. Although she was present at the Battle of the Philippine Sea in June 1944, Yamato played no part in the battle.
The only time she fired her main guns at enemy surface targets was in October 1944, when she was sent to engage American forces invading the Philippines during the Battle of Leyte Gulf. The Japanese were unaware that Admiral Halsey's entire massive fast carrier task force with battleships had been successfully lured away by a feint. Left behind was only a slow escort carrier task force armed against ground forces with no hope of protecting vulnerable troop transports from the Yamato. But as the American light ships resembled larger cruisers and carriers, the Japanese believed they were fighting the main fleet. The massive guns of Yamato would not be turned against battleships, but in the Battle off Samar would instead be a seemingly mismatched showdown against the industrial production of small and inexpensive light ships and carriers. Nevertheless desperate sailors and aviators delivered accurate 5 in shellfire and torpedoes from ships as small as destroyer escorts. These attacks wrought enough havoc on the Japanese surface force to turn them back, but only after inflicting losses comparable in ships and men to the Battle of Midway.
During 1944, the balance of naval power in the Pacific decisively turned against Japan and, by early 1945, the Japanese fleet was much depleted and critically short of fuel stocks in the home islands, limiting its usefulness. In April 1945, in a desperate attempt to slow the Allied advance, Yamato was dispatched on a one way voyage to Okinawa, where it was intended that she should protect the island from invasion and fight until destroyed. The task force was spotted south of Kyushu by US submarines and aircraft, and on 7 April 1945 she was sunk by American carrier-based bombers and torpedo bombers with the loss of most of her crew.

From the time of their construction, Yamato and her sister Musashi carried significant weight in Japanese culture. The battleships represented the epitome of Imperial Japanese naval engineering, and because of their size, speed, and power, visibly embodied Japan's determination and readiness to defend its interests against the Western Powers and the United States in particular. Shigeru Fukudome, chief of the Operations Section of the Imperial Japanese Navy General Staff, described the ships as "symbols of naval power that provided to officers and men alike a profound sense of confidence in their navy." Yamato's symbolic might was such that some Japanese citizens held the belief that their country could never fall as long as the ship was able to fight.


Decades after the war, Yamato was memorialised in various forms by the Japanese. Historically, the word "Yamato" was used as a poetic name for Japan; thus, her name became a metaphor for the end of the Japanese empire. In April 1968, a memorial tower was erected on Cape Inutabu in Japan's Kagoshima Prefecture to commemorate the lives lost in Operation Ten-Go. In October 1974, Leiji Matsumoto created a new television series, Space Battleship Yamato, about rebuilding the battleship as a starship and its interstellar quest to save Earth. The series was a huge success, spawning five feature films and two more TV series; as post-war Japanese tried to redefine the purpose of their lives, Yamato became a symbol of heroism and of their desire to regain a sense of masculinity after their country's defeat in the war. Brought to the United States as Star Blazers, the animated series proved popular and established a foundation for anime in the North American entertainment market. The motif in Space Battleship Yamato was repeated in Silent Service, a popular manga and anime that explores issues of nuclear weapons and the Japan-US relationship. The crew of the main plot device, a nuclear-powered super submarine, mutinied and renamed their vessel Yamato, in allusion to the World War II battleship and the ideals she symbolises.
In 2005, the Yamato Museum was opened near the site of the former Kure shipyards. Although intended to educate on the maritime history of post Meiji-era Japan, the museum gives special attention to its namesake; the battleship is a common theme among several of its exhibits, which includes a section dedicated to Matsumoto's animated series. The centrepiece of the museum, occupying a large section of the first floor, is a 26.3-metre long model of Yamato (1:10 scale). 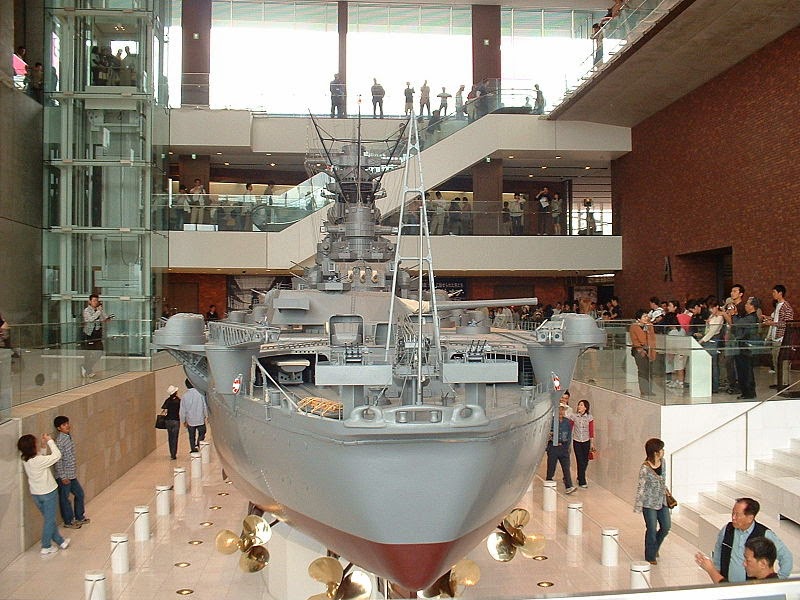 Later that year, Toei released a 143 minute movie, Yamato, based on a book by Jun Henmi, to commemorate the 60th anniversary of the end of World War II; Tamiya released special editions of scale models of the battleship in conjunction with the film's release. Based on a book of the same name, the film is a tale about the sailors aboard the doomed battleship and the concepts of honour and duty. The film was shown on more than 290 screens across the country and was a commercial success, taking in a record 5.11 billion yen at the domestic box office.
Posted by MrGarabaldi at 4:01 AM