I saw this on Yahoo Finance,  I am slightly annoyed, I am a big believer in this app, it is the only app that I use all the time.  Everytime I drive, I use this app, it is nice to know what is going down the road.  This app has saved me numerous times from bad traffic and the occasional revenue generation speed traps and I swear by it.  I have equated this app to driving with twitter.
I am annoyed that several police groups are wanting to remove this feature and they are citing "officer safety" for the reason.  I understand the possible concern but they are rolling out that term for everything, and I and many others are getting"officer safety" burnout.  it is used to excuse any and all police interaction with the public that usually results in a citizen getting shot, beaten or harassed.  Usually the perp deserves it by doing something stupid, but there are many examples of police overreacting and it is all over you-tube.  And the supervisors excuse it by "Officer Safety" and the police that break the rules get a "get out of jail free" card.  The average person is starting to resent the double standard that this will entail. 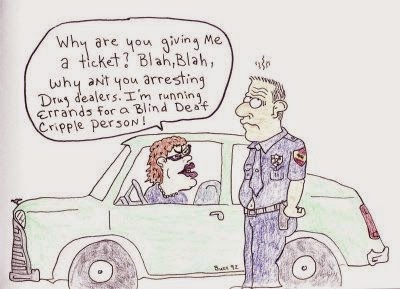 WASHINGTON (AP) -- Sheriffs are campaigning to pressure Google Inc. to turn off a feature on its Waze traffic software that warns drivers when police are nearby. They say one of the technology industry's most popular mobile apps could put officers' lives in danger from would-be police killers who can find where their targets are parked.
Waze, which Google purchased for $966 million in 2013, is a combination of GPS navigation and social networking. Fifty million users in 200 countries turn to the free service for real-time traffic guidance and warnings about nearby congestion, car accidents, speed traps or traffic cameras, construction zones, potholes, stalled vehicles or unsafe weather conditions.
To Sergio Kopelev, a reserve deputy sheriff in Southern California, Waze is also a stalking app for law enforcement. 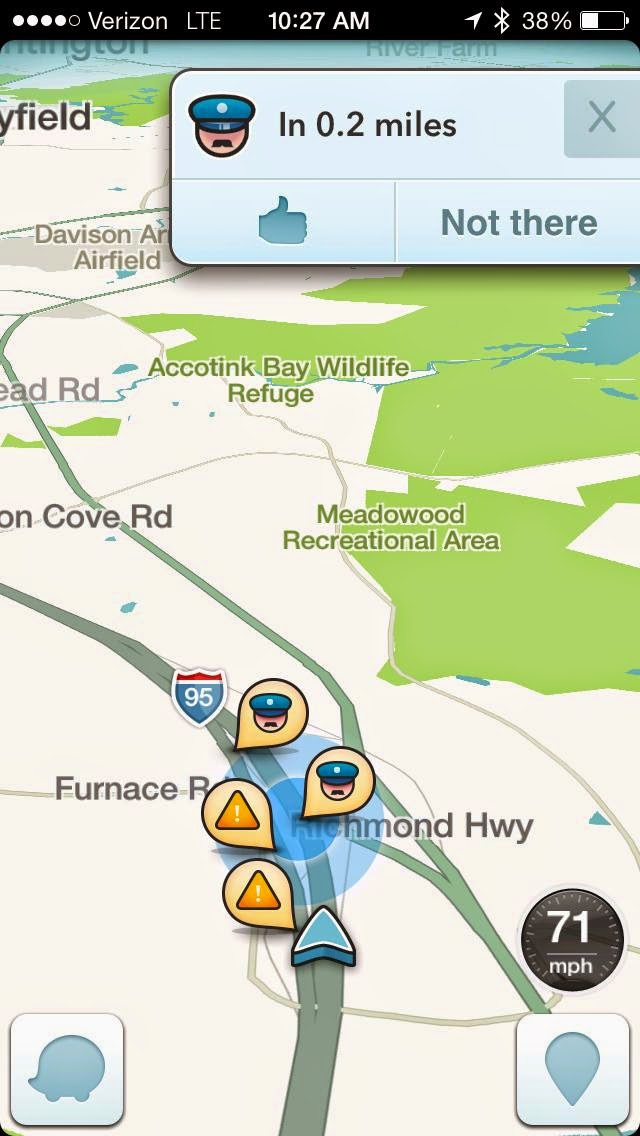 There are no known connections between any attack on police and Waze, but law enforcers such as Kopelev are concerned it's only a matter of time. They are seeking support among other law enforcement trade groups to pressure Google to disable the police-reporting function. The emerging policy debate places Google again at the center of an ongoing global debate about public safety, consumer rights and privacy.
Waze users mark police presence on maps without much distinction other than "visible" or "hidden." Users see a police icon, but it's not immediately clear whether police are there for a speed trap, a sobriety check or a lunch break. The police generally are operating in public spaces.
A Waze spokeswoman, Julie Mossler, said the company thinks deeply about safety and security. She said Waze works with the New York Police Department and others around the world by sharing information. Google declined to comment.
"These relationships keep citizens safe, promote faster emergency response and help alleviate traffic congestion," Mossler said.

Google has a complicated relationship with government and law enforcement. The company worked closely with the Obama administration to defend itself against hacking by China's government, and it is regularly compelled to turn over to police worldwide copies of emails or other information about its customers. Last year, after disclosures that the National Security Agency had illicitly broken into Google's overseas Internet communication lines, Google and other technology companies rolled out encryption for users, which the U.S. government said could hamper law enforcement investigations. Also last year, Google and other companies sued the U.S. to allow them to more fully disclose to customers details about how much information they were required to hand over each year.
Sheriff Mike Brown of Bedford County, Virginia, said the police-reporting feature, which he called the "police stalker," presents a danger to law enforcement.
"The police community needs to coordinate an effort to have the owner, Google, act like the responsible corporate citizen they have always been and remove this feature from the application even before any litigation or statutory action," said Brown, who also serves as the chairman of the National Sheriffs Association technology committee.
Nuala O'Connor, head of the Center for Democracy and Technology, a Washington civil liberties group, said it would not be appropriate for Google to disable the police-reporting feature.
"I do not think it is legitimate to ask a person-to-person communication to cease simply because it reports on publicly visible law enforcement," she said. She said a bigger concern among privacy advocates is how much information about customers Waze shares with law enforcement, since the service necessarily monitors their location continually as long as it's turned on.
Brown and Kopelev raised concerns during the meeting of the National Sheriffs Association winter conference in Washington. They pointed to the Instagram account of the man accused of shooting two NYPD officers last month. Ismaaiyl Brinsley posted a screenshot from Waze on his Instagram account along with messages threatening police. Investigators do not believe he used Waze to ambush the officers, in part because police say Brinsley tossed his cellphone more than two miles from where he shot the officers.
Kopelev said he hadn't heard about the Waze app until mid-December when he saw his wife using it. Afterward, Kopelev said he couldn't stop thinking about the app and was motivated to act by the NYPD shooting. While attending the funeral of one of the officers in New York, he spoke with Brown, his former boss. Brown asked Kopelev to discuss Waze at the upcoming sheriffs' association conference. Kopelev refers to his efforts as his "personal jihad."
The executive director of the Fraternal Order of Police, Jim Pasco, said his organization has concerns, too.
"I can think of 100 ways that it could present an officer-safety issue," Pasco said. "There's no control over who uses it. So, if you're a criminal and you want to rob a bank, hypothetically, you use your Waze."

This is not the first time law enforcement has raised concerns with these types of apps. In 2011, four U.S. senators asked Apple to remove all applications that alert users to drunken driving checkpoints. Nokia removed the sobriety check tracking function of one of the most popular apps, Trapster, according to Trapster founder Pete Tenereillo. Trapster was eventually discontinued at the end of last year due to Waze's popularity.
Posted by MrGarabaldi at 8:03 PM