Here I go again.....doing Monday Music on a Tuesday......What can I say...I like working overtime:).  There was no OT for me today:(  so I can get my installment of Monday Music.   I heard this song on my XM radio on the way to work.  It was on the countdown for 1982 and I think it got to number "9".  I remembered going to the arcade at Southlake Mall, and watching all the video junkies play "Pac man"  I did play it a few times....and got slaughtered....My game of choice was "BattleZone" and "Zaxxon".  I heard this song and it was campy and fun to listen to.  it did describe the early 80's very well, to a  young person listening to it now...they wouldn't get the references.  Video games are very commonplace....and taken for granted.  But in the early 80's video games were new and fresh and they took off and basically defined a generation.

Pac-Man Fever is a 1982 concept album recorded by Buckner & Garcia. It is also the name of the first song on that album. Each song on the album is about a different classic arcade game, and uses sound effects from that game. The album was released as an LP, a cassette, an 8-track tape, and later completely re-recorded for CD release in 1999 and 2002. The title itself is a parody of “Cat Scratch Fever” by Ted Nugent. 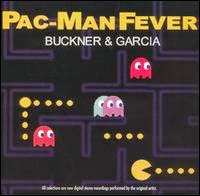 The title song, "Pac-Man Fever", was released as a single in December 1981 and became a top-ten hit, peaking at #9 in March 1982 on the Billboard Hot 100 and earning Gold certification by the RIAA for selling over a million records; the single sold 2.5 million copies in total as of 2008. It had been released independently earlier in the year on the BGO Records label, before being picked up by CBS. "Do the Donkey Kong" was the second single released from the album, but it failed to chart except on Billboard's Bubbling Under Hot 100 Singles at #103. Like the title song, the album Pac-Man Fever itself went on to receive a Gold certification from the RIAA, for over 500,000 records sold; the album sold 900,000 copies in total by the end of 1982. The duo performed both of these singles on American Bandstand on March 20, 1982, as well as appearing later that day on Solid Gold, singing "Pac-Man Fever".

In 1998, the duo was asked to record an unplugged version of "Pac-Man Fever" exclusively for the syndicated radio show Retro Rewind. In 1999, a re-recorded version of the album was released independently by Buckner and Garcia, which was released commercially through K-Tel in 2002. The re-release was anxiously awaited by fans of the original album. However, Buckner and Garcia could not obtain the original master recordings from Sony Music Entertainment, so the duo was forced to record new performances of the songs and recreate a lot of the sound effects either digitally or musically.
Posted by MrGarabaldi at 4:48 PM