About 6 weeks ago, I had gotten an email from "Eric of Ammoman" asking me if I wanted to evaluate some ammunition...Well I had a lot of skepticism...but I remembered my favorite Blog Babe Momma Fargo  doing something like this and she told me that "Eric" is legit and a good guy.  So I sent Eric a list of ammo that I could shoot.  Well a week later I had a package show up:) 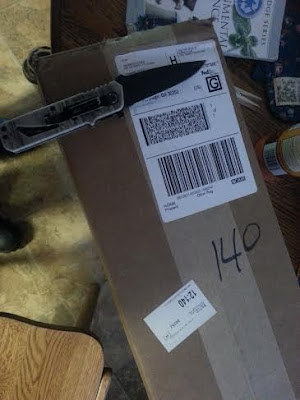 Need less to say, I was very excited...Kinda like a kid in a candy store:) 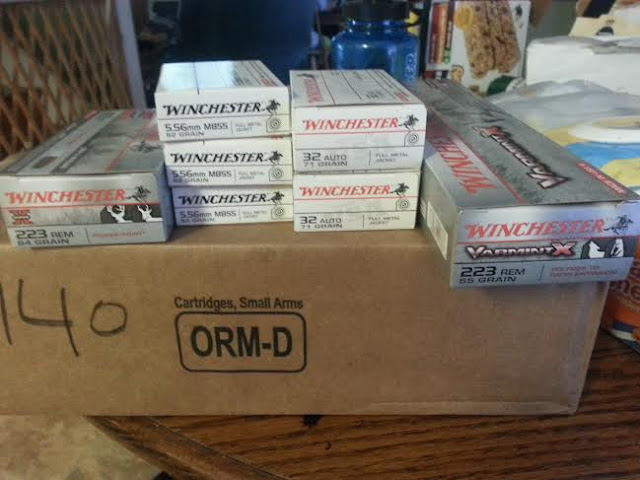 it was high quality WINCHESTER ammunition.  I was wondering how my rifle will handle the high quality ammunition after I have been feeding it the cheap stuff for years.   Well I made arrangements to shoot at a remote location where it was quiet and peaceful..(Thanks Mac).   Well to do a good evaluation, I pulled out some of my different kinds of ammo so there could be a good comparison. 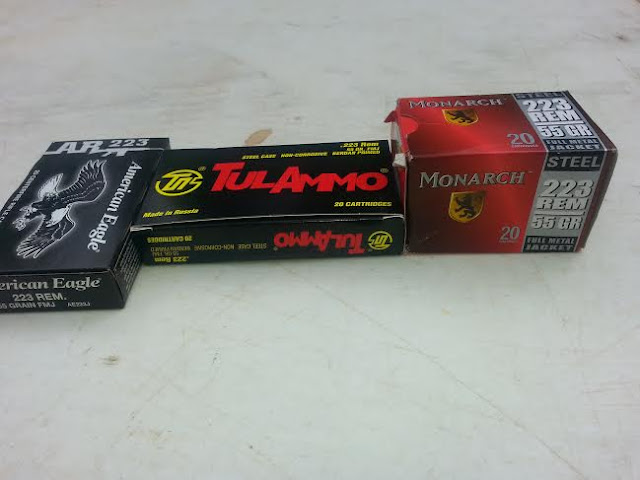 This is a sample of the ammunition I brought to the table for the comparison. 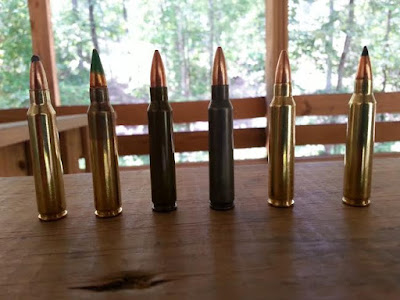 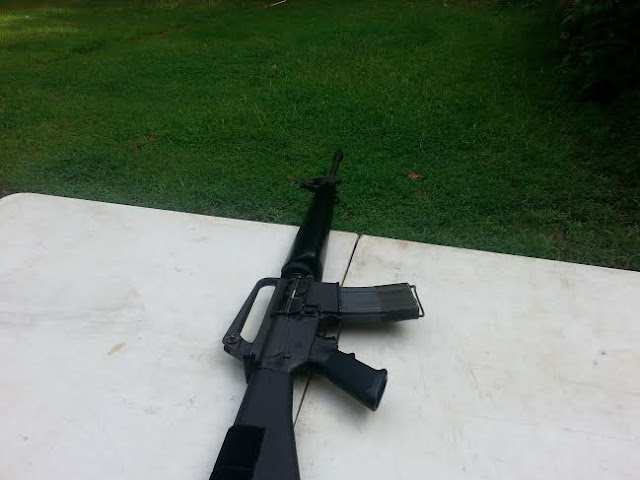 The barrel was the original 1/12 twist of the "old M16" and 3 prong flash suppressor and yes it has a bayonet lug.  I have since upgraded it several times and I love the modular design of Eugene Stoner.  You can set up the rifle based on your requirements and you can change it up when you need to. 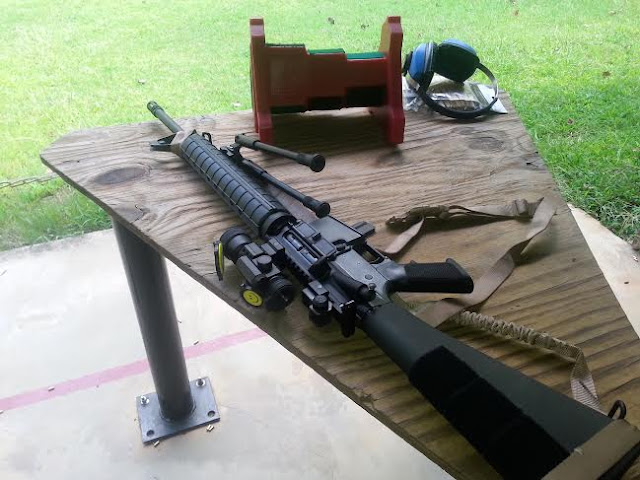 This is the configuration I had the rifle set up when I started the comparison.  The rifle is using an "A2" barrel 1 in 7 twist with the birdcage flash suppressor mounted on a "flattop" upper with the forward assist.  I am using a "Vortex Strikefire Red/Green dot sight.  I am also using brand new Troy magazines.  My old "Army" magazines have been moved to the "reserve" stack.

The first one I shot was the "Monarch" steel case, stuff I got from Academy, very cheap and here is some information on the type of ammo.
Monarch is not an actual manufacturer, it is Academy's house brand. The brass cased ammo is made by PPU in Serbia and the steel jacketed ammo is made by Barnaul in Russia.  I purchased this ammunition as my "last ditch" stock before the bayonet and entrenching tool came out.   Well I fired it first and it shot well,  I had no feeding problems with the cheap ammunition or the magazines and the accuracy was "ok" there was a bit of variation on the target, but for my purposes, no complaints.
The second group of ammunition was the Winchester M855 green tip 62 grain rounds.  I could tell a bit of difference in the sound my buffer spring made in the buttstock.  It don't sound scientific but I can tell the M855's were a "hotter" round than the usual 55 grain M193 stuff my rifle uses.  The round shot consistant and the groupings were good and the rifle and magazines and rifle functioned flawlessly.
The next round of ammunition  I shot was  was Tula Arms.  This is the cheap ammo you can buy in Wallyworld and other places.  I bought it to fill my stock of ammunition.  I never fired it until now.  I have had no problems in the past feeding cheap ammo through my rifle...I have learned a long time ago, my rifle isn't a picky eater and will ingest whatever I load into the magazine.  Well I was surprised by the results...I had problems...I had these... 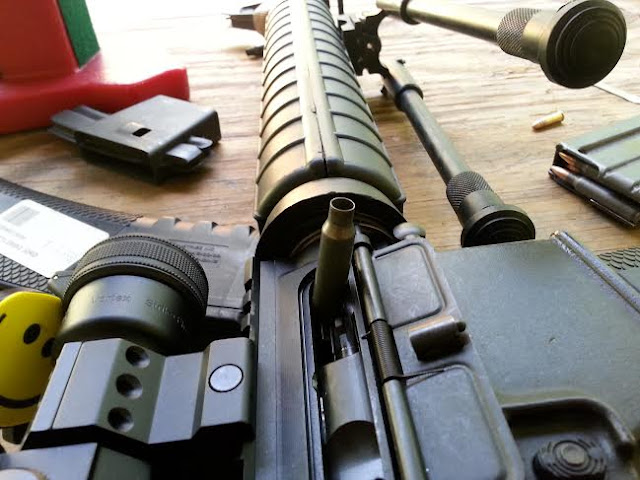 I had several stovepipes and doublefeeds and several of these.. 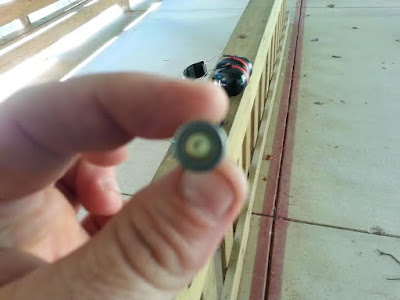 bad Primers
Grouping was ok...when it fired...I could hit a man sized target if necessary...but it was inconsistant.  My troy magazines did feed the rounds like they were supposed to, but if I had to depend on this ammo in a SHTF scenario...I was in trouble.   Needless to say...I will not buy it anymore and what stock of Tula I do have will be expended ASAP and I will save my .22 adapter and .22's for after I have exhausted my stock of Tula.  I would not purchase this ammunition in the future.
Well after the disaster of the Tula run, I switched to the Winchester 55 grain .223 Rem Polymer tip rapid expansion varmint X ammunition.  This ammo was developed to take out "critters" like prairie dogs, and other related vermin.  The round is more powerful, I can tell that from the way my buffer spring reacted inside the stock of my rifle.  I had no ballistic clay so I couldn't tell you what the wound channel would look like.  The ammunition had a soft tip so I will make the assumption that it will expand pretty well inside some critter maximizing the kinetic energy transfer and ensuring the effectivity of the shot.   The accuracy and grouping was good and the rounds cycled well through the rifle.
I than switched up to the Winchester Super X .223 Remington 64 grain  power-point rounds, this round was designed to take on deer and antelope. I am sure they will also expand well inside some deer related animals.  They also fed well and cycled well.  The accuracy was good they grouped well for my purposes and my rifle digested them with no problems.  I was pleased with this run.
I then switched my Rifle to its "old" upper and barrel. for the American Eagle M193 55 Grain FMJ.  I figured I would go "old School" for that ammo,  even down to the magazine: 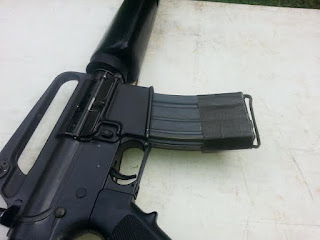 This is one of my "army" magazines I had when I was in the service, I had these magazines when I deployed to the Persian Gulf for Desert Shield/Storm.  I had used 550 cord and olive drab duct tape to make a loop to help removal of magazines in LBE magazine pouches, they tend to bind.
The American Eagle ammunition functioned as it should, grouping was good and performance was consistent for the type of ammunition used.  My rifle ingested the 55 grain FMJ like it was supposed to with no jams or hiccups even with an old magazines.  Of course I didn't fill it up either so I am sure that wasn't a factor.  I used to load in the service M196 tracer in the first round and the last 2 rounds to let me know that I was nearing the end of my magazine and I would only load 28 rounds even though the capacity was "30".


The 5.56×45mm NATO (official NATO nomenclature 5.56 NATO) is an intermediate cartridge developed in the United States and originally chambered in the M16 rifle. Under STANAG 4172, it is a standard cartridge for NATO forces as well as many non-NATO countries. It is derived from, but not identical to, the .223 Remington cartridge.

I also had gotten some .32 Auto FMJ from Eric.  I used my little Czech CZ-50 for the Pistol shooting. 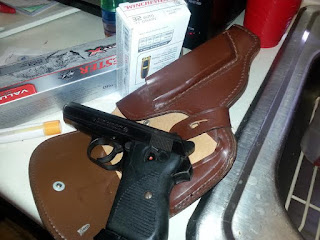 I picked her up in Germany in the late 80's, the Czech Police had gotten a bunch of CZ-75's so these were "surplused".  The pistol rides in a East German Makarav holster.  I loaded the first magazine and the pistol ran well.  But the second run the rounds didn't feed properly.  I am not sure if it was the magazine or the ammunition.  I only have one magazine...so I can't rule out a magazine problem.  I was kinda surprised...the CZ would run anything....the Pistol is Combloc weapon and they ain't picky.
I did notice that the ammunition discolored the brass, I think they are "hot" rounds...I wonder if that caused a "cycle" issue. 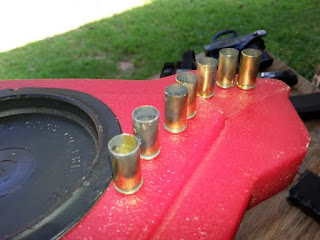 I will locate another magazine for the pistol then rerun the test.  I have to say this one is inconclusive....But Winchester makes good rounds so I am leaning toward a magazine fault but I do want to make sure.  If you want any .32 ammo you can go Here for AMMO!

.32 ACP (Automatic Colt Pistol), also known as the .32 Automatic is a centerfire pistol cartridge. It is a semi-rimmed, straight-walled cartridge developed by firearms designer John Browning, initially for use in the FN M1900 semi-automatic pistol. It was introduced in 1899 by Fabrique Nationale, and is also known as the 7.65×17mm Browning SR or 7.65 mm Browning.

In conclusion, I really enjoyed the experience, of course a bad day at the range beats a good day at work.  I do want to thank Eric@ammoman.com for the ammunition and I also want to thank Mac and Jackie for providing me the venue and the camaraderie for the shoot. Posted by MrGarabaldi at 7:01 PM