Nancy Reagan passes beyond the rim..

I have 2 half completed post in the "draft" section of this blog.  I was working on one of them then switched gears and started another......Ohhh a Shiny!....
But on a serious note..

This Morning Ronald Reagan requested a Dance with Nancy Reagan and she accepted. 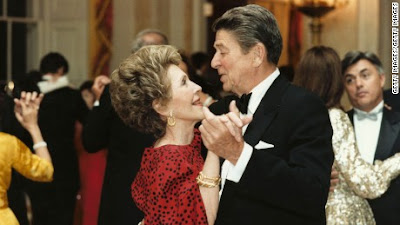 (CNN)Former first lady Nancy Reagan, who joined her husband on a storybook journey from Hollywood to the White House, died Sunday.
She was 94.
Nancy Reagan died at her home in Los Angeles of congestive heart failure, according to her spokeswoman, Joanne Drake of the Ronald Reagan Presidential Library.
"Mrs. Reagan will be buried at the Ronald Reagan
Presidential Library in Simi Valley, California, next to her husband, Ronald Wilson Reagan, who died on June 5, 2004. Prior to the funeral service, there will be an opportunity for members of the public to pay their respects at the library," Drake said in a statement.

The former first lady requested that contributions be made to the Ronald Reagan Presidential Library and Foundation in lieu of flowers, the statement said.

She was a classy women and made sure that she never brought shame to the office of First lady
of the United States.   She is a reminder of an earlier time where people were expected to exhibit class in their dealings.
Posted by MrGarabaldi at 6:08 PM