Monday Music "Vacation" by the GoGo's

I was driving the truck home and this song came across my mp3 player and I thought "Eureka!"  I will use that song.   I liked the GoGo's,  To me they were pretty (remember I was 16 )and they could sing and play their own instruments.  The music was a bit bubblegum but I liked it.  I never looked the the deeper meaning of life through music, it is good background and it tells a story . 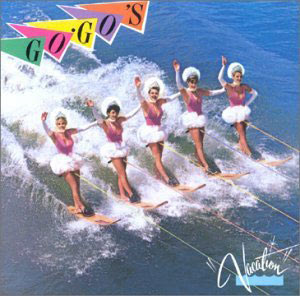 The Go-Go's are an American rock band formed in 1978. They made history as the first and only all-female band that both wrote their own songs and played their own instruments to top the Billboard album charts.

The Go-Go's rose to fame during the early 1980s. Their 1981 debut album, Beauty and the Beat, is considered one of the "cornerstone albums of (US) new wave" (AllMusic), breaking barriers and paving the way for a host of other new American acts. When the album was released, it steadily climbed the Billboard 200 chart, ultimately reaching No. 1, where it remained for six consecutive weeks. The album sold in excess of 3 million copies and reached triple platinum status, making it one of the most successful debut albums ever. The Go-Go's have sold more than 7 million albums.

The video starts by showing the song on youtube title on a photo in a travel brochure. It depicts the band first waiting on a pile of luggage at an airport after Belinda Carlisle arrives via a taxi. Gradually it changes to show them performing, then ends with a section in which they appear to be water-skiing in formation, as per the album cover. All the band members smile and mug for the camera in individual closeups. The photo then freezes and zooms out to be shown in another travel brochure on the floor, which an unseen janitor sweeps up, along with other trash (most likely from the airport portion of the video).
It was shot in one very long day on a $50,000 budget, large for the time, since the band was coming off a debut album that had reached number one. "We still saw videos as an annoying waste of time," recalls Jane Wiedlin. "After seven or eight hours we sent out someone to sneak in booze." Kathy Valentine says they drank "lots of champagne. Lots." Wiedlin says the effects are evident during the closeups of the women at the end: "... if you look at our eyes, we're all so drunk. We didn't even try to make it look like we were really waterskiing."

Posted by MrGarabaldi at 8:06 AM