I posted back in 2012 about the Chinese Aircraft Carrier.  Apparently the Chinese or the "PLA-N" the Peoples Liberation Army- Navy are expanding their power and influence and after building their manmade islands to bolster their claim for the South China Sea.  Remember China is feuding with Vietnam, Philippines and Japan over the Spratley Islands.  I will make a very uneducated guess, this parallels the American development in the early 1920 and early 1930 perhaps in carrier development.  It is easier for them because others have already built Aircraft Carriers and have already worked out tactics.  I see the Chinese will challenge the United States in the next 20 to 30 years in the Pacific.

Slowly but surely, China’s first indigenous carrier is coming into being. Laid down in 2015 with an expected launch date in 2017 or 2018, China’s second aircraft carrier may enter full service sometime around 2020. The lack of transparency around the project has spurred a tremendous degree of speculation, down to some very basic questions. As was the case with Liaoning (CV-16), China’s first carrier, analysts have a name problem; no one is quite sure what to call the new ship. For years as Liaoning underwent construction and refit, China-watchers guessed as to the correct name, generally settling on the accurate but inelegant “ex-Varyag” (other guesses included Shi Lang and Zheng He). While some have suggested “Shandong,” most commentators have settled around “CV-17.”
So, what do we know about CV-17? 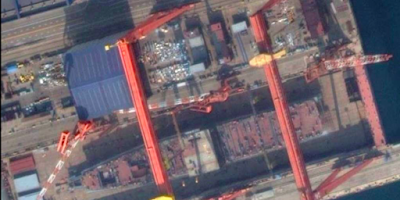 Photos of CV-17, under construction at Dalian Shipbuilding, suggest that she will strongly resemble China’s first carrier. She appears to be of roughly similar size to Liaoning, has a ski-jump, and apparently will have conventional propulsion. Speculating on the basis of the appearance of a few models in the public domain, Andrew Erickson suggests that CV-17 may use gas or diesel/gas turbines (reports on Liaoning’s propulsion system remain mixed and uncertain, but many suspect she uses Soviet-style steam turbines) 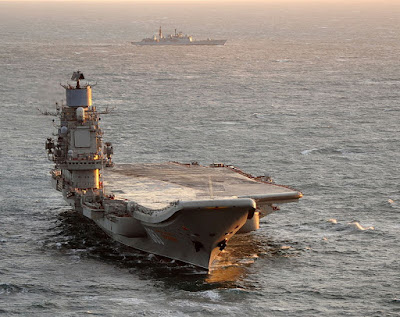 In a sense, CV-17 will become the second half-sister of the Russian Admiral Kuzetsov, which recently passed through the English Channel to great fanfare. We can expect that the Chinese will improve upon this design at the margins, but the core of the ship remains very similar to the vessel that emerged from the Soviet Black Sea Shipyard in 1990. While this seems like a long time to stick with a single design, the U.S. Navy built Nimitz-class carriers to the same basic template for about forty years 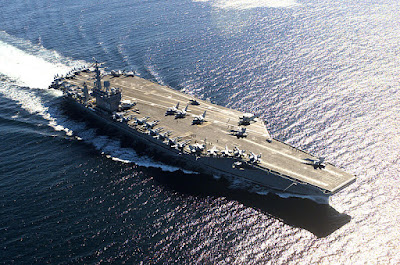 CV-17 is, by far, the largest military vessel ever constructed in a Chinese shipyard. The number of shipyards worldwide that can handle construction of an aircraft carrier is remarkably small, and the workforce expertise needed to build the ship disappears quickly. In a sense, CV-17 is as useful for industrial purposes as she will be for military; the experience gained in her construction will set the table for the next Chinese carriers, which may have a more modern, effective design.

In particular, Chinese shipbuilders need to overcome several hurdles before they begin constructing first rate carriers. They need to either develop effective models of nuclear propulsion for surface ships, or scale up existing conventional powerplants (Chinese engine manufacturing has struggled with reliability). They need to decide whether to install steam catapults (an exceedingly complex process) or jump straight to electro-magnetic; some reports suggest that CV-17 may have catapults in addition to a ski-jump, which would make sense primarily from an industrial-capability point of view.

In all likelihood, CV-17 will carrier Shenyang J-15 fighters (a variant of the J-11, itself part of the larger Su-27 “Flanker” family of aircraft). CV-17 may someday carry the J-31 stealth fighter, but at this point the future airwing is entirely notional. Like her half-sisters, CV-17 will lack the capacity to launch large early-warning aircraft, making her dependent upon land-based aircraft and other types of sensors for a full picture of the battlespace.

This suggests that while CV-17 may venture farther afield than her half-sister Liaoning, she will not form the core of an expeditionary battlegroup. Her aircraft will lack the range, payload, and command and control tools necessary to undertaking independent expeditionary operations. She (like Admiral Kuznetsov) will in overall capabilities more resemble one of the USN’s America-class light carriers than a Nimtz or Ford class supercarrier.

Most China watchers seem to believe that the PLAN will move on to a larger, more advanced design after CV-17. Innovations may include many of the systems taken for granted on American carriers, such as catapults (steam or electro-magnetic), and nuclear propulsion. If so, this suggests that CV-17 is a stepping stone, enabling the Chinese shipbuilding industry to gain experience with larger vessels in the same way that CV-16 gave the PLAN the chance to develop rudimentary carrier flight skills.

But what will then happen to CV-17, after the PLAN moves on to larger ships? Unless the PLAN decides on a path similar to that of India- three carriers of wildly different specifications and capabilities- the next class will likely represent the core of China’s carrier force. CV-17 will be paired with the comparatively ancient CV-16, conducting second-tier operations. Eventually, as Liaoning begins to feel her age (and unique construction history), CV-17 may shift into a training role
Posted by MrGarabaldi at 8:12 PM