I was surfing around and saw a pic of an Iron clad and started following the linkies and decided to do a post.  I remember as a kid seeing this pic, then the battle of the USS Monitor the Merrimac CSS Virginia. during the American War between the States Civil War. 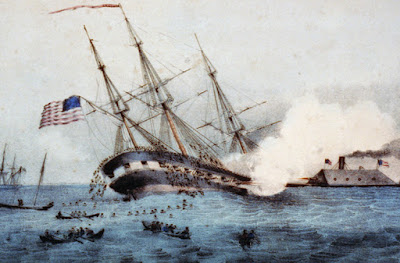 I was giving a book in 1975 that my Dad bought me called "Sea Battles of the 20th Century", The battle of the Tsushima Straits was the first battle listed and this image I remembered 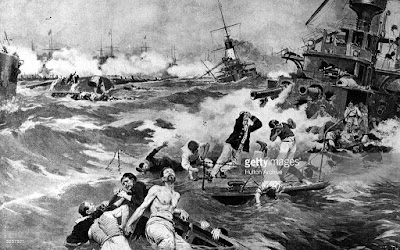 Pre-dreadnought battleships were sea-going battleships built between the mid- to late 1880s and 1905, before the launch of HMS Dreadnought.Pre-dreadnoughts replaced the ironclad battleships of the 1870s and 1880s. Built from steel, and protected by hardened steel armour, pre-dreadnought battleships carried a main battery of very heavy guns in barbettes (open or with armored gunhouses) supported by one or more secondary batteries of lighter weapons. They were powered by coal-fuelled triple-expansion steam engines.
In contrast to the chaotic development of ironclad warships in preceding decades, the 1890s saw navies worldwide start to build battleships to a common design as dozens of ships essentially followed the design of the British Majestic class. The similarity in appearance of battleships in the 1890s was underlined by the increasing number of ships being built. New naval powers such as Germany, Japan, the United States, and – to a lesser extent – Italy and Austria-Hungary, began to establish themselves with fleets of pre-dreadnoughts, while the navies of Britain, France, and Russia expanded to meet these new threats. The decisive clash of pre-dreadnought fleets was between the Imperial Russian Navy and the Imperial Japanese Navy during the Battle of Tsushima on 27 May 1905These battleships were abruptly made obsolete by the arrival of HMS Dreadnought in 1906. Dreadnought followed the trend in battleship design to heavier, longer-ranged guns by adopting an "all-big-gun" armament scheme of ten 12-inch guns. Her innovative steam turbine engines also made her faster. The existing pre-dreadnoughts were decisively outclassed, and new and more powerful battleships were from then on known as dreadnoughts while the ships that had been laid down before were designated pre-dreadnoughts.

In the seventeenth and eighteenth centuries, navies were very important. The maritime powers of Europe, particularly England, France, Spain, the Netherlands, and Portugal, relied upon them to protect trade routes and overseas colonies. Warships were the most powerful weapons a state could possess. They were mostly divided into frigates, built for speed and agility, and ships of the line, designed for battle.
With the invention of the steam engine in the eighteenth-century naval warfare changed radically. The propeller greatly enhanced the speed and maneuverability of ships. Steam-powered vessels did not have to rely on the sail, and so engineers could think more of weaponry and protective armour. This made armoured vessels – ironclads – possible.