A few years ago I went to the Udvar-Hazy Smithisonian museum that was about 10 minutes by shuttle, here is a pic of my son back in 2012, he really loved the Museum.  I would like to go back and check it out.  I remembered seeing a strange airplane in there that I had heard about but never seen, it is the elusive Arado 234, the first operational Jet bomber. 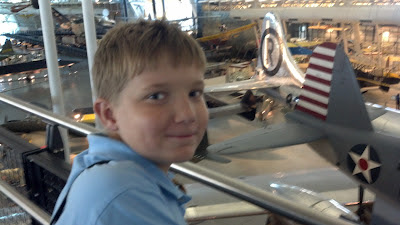 A pic of my son enjoying the Museum.   It is 15 minutes shuttle bus ride that cost .50 per person per way so it cost us $2.00 plus there is a mcdonalds inside the museum and a gift shop(of course).  If you are an aviation junkie...it is worth the flight and ride out there.  One of the Space shuttles is also out there.

The Germans mastered the technology of jet engines in 1939 with the Heinkel He 178. They had plans to develop a much larger aircraft, capable of bombing Allied cities, without the possibility of being intercepted.

The Arado Company installed the Junkers Jumo 004(the same engine used by the ME 262 Schwalb (Swallow) under each wing and produced the world’s first operational turbojet. The prototype made its first reconnaissance mission on 2 August 1944, when Erich Sommer flew it. The pilot reported the landing gear was very problematical and it was hard to stop the aircraft on the landing strip. It was designed to land using retractable skids, which were difficult to stop if the strip was wet.
After the reconnaissance version of the airplane had been tested in the field, the German High Command demanded an armed version. The final victory the Fuhrer promised was only achievable if superior weapons were put to use as soon as possible. 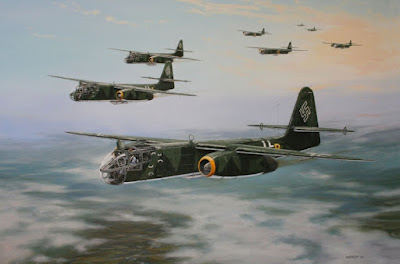 By then, there was not the slightest chance that a bomber could change the outcome of the war. The Nazi propaganda machine was heavily relying on the so-called Revenge Weapons such as the V-1 and V-2 rockets and the superior design of the Me-262, a pioneering fighter jet
The bomber version brought several other complications. There was not enough space to make a bomb bay, so the bombs had to be carried externally, making them more vulnerable to malfunction. As the cockpit was located directly in front of the plane’s fuselage, the pilot had no clear view of the rear. He had to use a periscope similar to the ones used in German tanks.  Fuel tanks were expanded, and the engine was improved.
Meanwhile, the recon variants of the Ar 234 were conducting missions all over Western Europe and Britain without being detected, due to the high speed and altitude at which they were flying. The bomber version Ar 234 flew its last mission in April 1945, and it was the last German aircraft to bomb Britain during WWII.
The Ar 234A, which was the official name of the reconnaissance variant,  could achieve a velocity of 742 km/h (461 mph) at its optimal height of 6,000 m (20,000 ft), with an effective range of 1,556 km (967 mi).

The bomber version marked Ar 234B was slightly slower, due to the weight of the bomb load, but still incredibly fast. One of its most notable actions was the bombardment of the Ludendorff Bridge at Remagen, Germany. 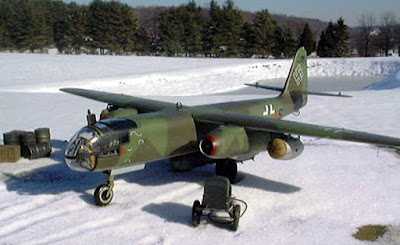 The bridge was a vital point held by the Americans, as it was necessary for transporting troops across the River Rhine. During ten days in March, when the Allies had captured the bridge at Remagen, 1000 kg of bombs were dropped on it daily, by an Ar 234 stationed nearby.
There were 210 units built from mid-1944 to the end of the war. They included prototypes and all variants of the aircraft. Only one of them survived. It is exhibited at the Steven F. Udvar-Hazy Center, near the Washington Dulles International Airport. 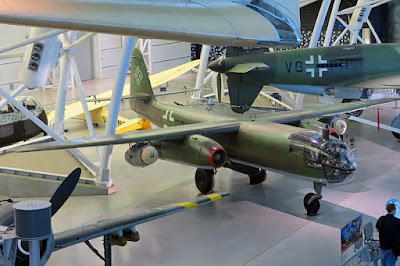 Posted by MrGarabaldi at 9:37 PM